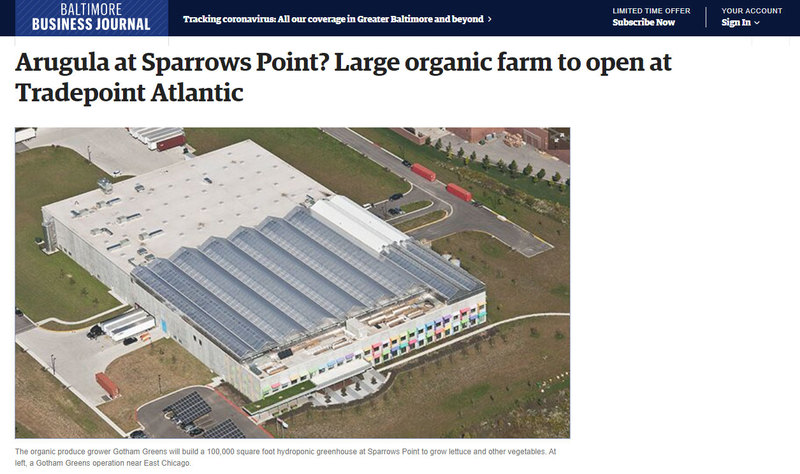 The organic produce grower Gotham Greens will build a 100,000 square foot hydroponic greenhouse at Sparrows Point to grow lettuce and other vegetables. At left, a Gotham Greens operation near East Chicago.

Gotham Greens organic produce will soon be sprouting leafy arugula, basil and bok choy on property at Sparrows Point once ruled by a fiery blast furnace.

The agtech startup said Tuesday it is building a 100,000-square-foot hydroponic greenhouse at Tradepoint Atlantic and will open up early next year.

The operation will allow the company to expand to the mid-Atlantic from Chicago and New York. At least 60 new jobs are expected from horticulturalists to produce baggers for the so-called "high-end salad" grower.

"It represents a softer, greener side of Sparrows Point," said Aaron Tomarchio, senior vice president for Tradepoint Atlantic. "And it is a new industry for Baltimore."

It is the latest — and most unique — addition to the 3,100-acre redevelopment of the former Bethlehem Steel plant in Dundalk that kicked off three years ago and has attracted giant distribution centers for Under Armour, FedEx Ground and Amazon.com.

Gotham Greens grows organic vegetables and herbs year-round inside a climate controlled facility and then packs and speed ships them to restaurants, retail and food service companies.

"We are farmers that live in apartments. We see green fields where others see rooftops," the company's website says. "We fuel blooming communities where others fear urban decay. We are obsessed with the delicate qualities of a lettuce leaf that was grown with care and harvested by hand before breakfast in order to reach your plate by lunch."

The private company started in 2009 and prides itself on using totally "clean-energy powered, climate-controlled urban rooftop greenhouses." It currently has operations in New York and Chicago, some in repurposed former industrial buildings.

"Urban agriculture, at its core, is about reconnecting with the community through food, jobs and economic development," said Viraj Puri, CEO of Gotham Greens, in a statement. "To that end, we've found a great partner and are proud to be part of the American industrial turnaround story taking place at Tradepoint Atlantic."

At Sparrows Point, the $9 million Gotham Greens development project will allow distribution of the greens to markets in Baltimore, Washington, D.C., Philadelphia and Delaware.

The greenhouses will be watered using recycled irrigation methods that are one-third more efficient than conventional farming adding to greater food safety, the company said.

The first greenhouse opened in Brooklyn, New York, in 2011 and was hailed as the first commercial-scale greenhouse of its kind in the U.S. The company then expanded to the a facility near East Chicago and built a large rooftop organic farm.

When the Sparrows Point farm opens in early 2019, the company will have a total of 500,000 square feet of greenhouse space in operation.

"Their unique approach to urban agriculture in an area once known for steel making and ship building will be an asset to the community and our state's economy," said Gov. Larry Hogan, in a statement.

Added Eric Gilbert, chief development officer at Tradepoint: "Gotham Greens is an example of the diverse tenant base we are bringing to a site once dominated by a single industrial user."