Your Project was viewed 520 times (totally).

Bank of America TPA 60 from Birch Capital on Vimeo. 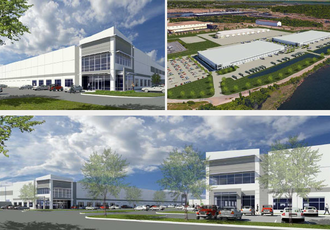 Tradepoint Atlantic is a 3,100 acre logistics and maritime development located on the Chesapeake Bay in Southeastern Baltimore County, Maryland. Featuring a unique combination of deep water port berths, rail infrastructure and highway proximity, Tradepoint Atlantic is the largest and most strategically important multi-modal industrial tract on the eastern seaboard.

Amazon.com, Inc. (AMZN.O – Nasdaq), incorporated on May 28, 1996, offers a range of products and services through its websites. The Company operates through three segments: North America, International and Amazon Web Services (AWS). The Company's products include merchandise and content that it purchases for resale from vendors and those offered by third-party sellers. It also manufactures and sells electronic devices. The Company, through its subsidiary, Whole Foods Market, Inc., offers healthy and organic food and staples across its stores.

The company has annual sales in excess of $135 billion and a market cap of nearly $700 billion.  Amazon employs more than 560,000 and is based in Seattle, Washington.

Amazon has executed a 15-year lease agreement with five, 5-year option periods. The Company contributed a substantial amount towards base building costs.

Under Armour, Inc. (UAA – NYSE) is engaged in the development, marketing and distribution of branded performance apparel, footwear and accessories for men, women and youth.  Its products are sold across the world and worn by athletes at all levels, from youth to professional, on playing fields around the globe, as well as by consumers with active lifestyles. The Company sells its branded apparel, footwear and accessories in North America through its wholesale and direct to consumer channels. As of December 31, 2016, the Company had approximately 151 stores in North America primarily located in outlet centers throughout the United States.

The company had 2017 annual sales of $5.0 billion and a market value of $7.32 billion.  Under Armour employs an estimated 6,500 and is based in Baltimore, Maryland.

The company had 2017 annual sales of $60 billion and a market value of $64 billion.  Federal Express employs an estimated 117,000 and is based in Memphis, Tennessee.

Scannell Properties, a FedEx preferred developer,  entered into a ground lease agreement with Tradepoint Atlantic. The base lease term is 40 years, with ten, five-year option periods.  Scannell developed the building on behalf of FedEx and subsequently entered into a long-term building lease with FedEx.

Tradepoint Atlantic includes the largest privately owned rail yard on the U.S. East Coast, including 100 miles of rail on the property, with both CSX and Norfolk Southern access. The project also has deep water marine access at the entrance to the Port of Baltimore, including a 2,200 foot east/west berth in a turning basin, a 1,120 foot finger pier and a separate barge berth.  Based on the land, marine and rail capabilities, Tradepoint Atlantic is positioned to handle multiple commodities, including bulk, break-bulk, project cargo, automotive roll-on/roll-off and agri-business.

Construction for the Project began in mid-2016 and is anticipated to be completed in December 2019.

Construction for the Project began in mid-2016 and is anticipated to be completed in December 2019.

Reg. D?
No
Reg. S?
No
Does the investor need to be accredited to invest?
No
Are returns paid on the investment prior to maturity?
No
Have all of the permits and permissions for project development been obtained?
No
Is there any patented intellectual property essential to this project?
No

Do potential investors need to pay a fee to obtain the operating documents, PPM or other subscription documents?
No
If Yes, Is that refundable in the event the investor decides not to invest?
No
Does that include the processing of the I-526, I-829 or any other legal fees associated with the immigration application?
No
If there is no finder or agent, would you reimburse that fee to the investor?
No
Do you pay finder’s fees to attorneys?
No
Do you pay fees to unlicensed broker’s or agents?
No

Has the Principal invested their own equity in the project?
No
Is collateral on the investment or loan provided?
No

Does this Project have Exemplar Approval?
No

Has this project been the subject of a USCIS/SEC/FBI/DOJ/AAO Review, Notice, Investigation or Action
No

Is Regional Center located within a Targeted Employment Area (TEA)?
No
Is this a Public / Private partnership?
No

Do you offer periodic reports to investors on the status of the investment?
No
Are these reports produced by you, or by an independent third party such as a auditing or accounting firm?
No
Do you have a third party firm that performs employee payroll & HR record keeping services for the project?
No
Do you have a third party firm that performs I-9 verification?
No
If No, do you perform I-9 verification of the employees?
No
Would you have any objection to an accounting or law firm performing an audit on the payroll, employment or financial records of the project?
No
If you lease space in your facility to third party firms, are they willing to allow an audit of their employment records for the purposes of verifying employment?
No

Bank of America TPA 60 from Birch Capital on Vimeo.