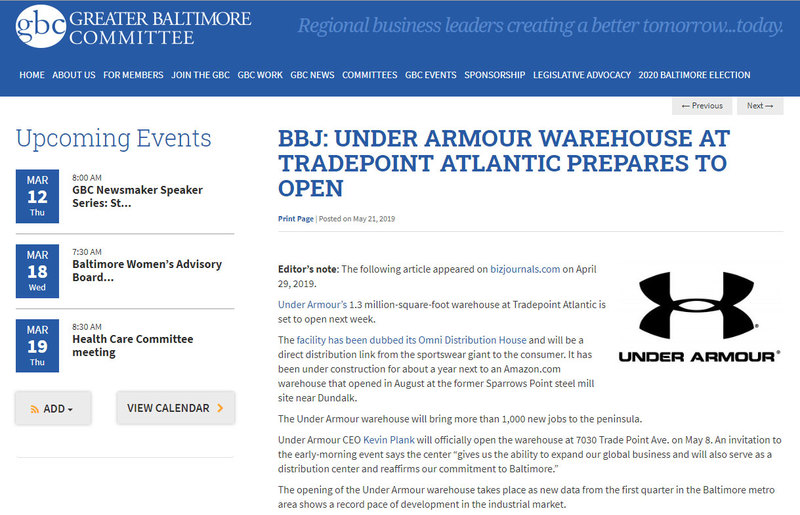 The 100,000-square-foot greenhouse at Baltimore County's Tradepoint Atlantic is open. It's slated to create 60 jobs.

At the former home of Baltimore County’s famed steel mill, one of the new industrial uses is bringing green to the mix.

Gotham Greens this week opened a 100,000-square-foot greenhouse at the Sparrows Point site, which is now known as Tradepoint Atlantic. It makes good on the the Brooklyn-based company’s announcement for Baltimore expansion plans in May 2018.

While it’s Gotham Greens’ first greenhouse in Baltimore, it’s the seventh greenhouse nationwide. Using hydroponic growing techniques, the greenhouse will supply produce to customers including retailers and restaurants year-round. From this warehouse, Gotham Greens said it plans to produce six million heads of lettuce a year, and serve 10 states in the mid-Atlantic and the Southeast.

It plans to make the produce available in Baltimore, and will also have a local crop dubbed “Chesapeake Crunch.” The company also sells herbs, sauces, dips and dressings.

“When we set out to expand our distribution into the Mid-Atlantic region, Baltimore quickly emerged as an ideal location for reaching this market,” CEO Viraj Puri said. “Urban agriculture, at its core, is about reconnecting with the community through food, jobs and economic development.”

In this case, it’s also a chance to reawaken one of the region’s economic engines. Following the decline of the mill that long flew the star of Bethlehem Steel and the 2015 implosion of its iconic blast furnace, Tradepoint Atlantic reopened as a 3,300-square-foot logistics hub with access to rail, land and water shipping channels. Along with Gotham Greens’ space, it’s also home to a massive Amazon fulfillment center and Under Armour warehouse, among others. Last year, Ørsted U.S. Offshore Wind also announced plans to stage turbines for a Maryland wind energy farm.

The transformation of the site figured into Gotham Greens’ plans, as Puri said the company “is committed to urban renewal and adaptive reuse projects.”

“Sparrows Point presented an opportunity to reimagine the site of the former Bethlehem Steel Mill — once the world’s largest iron and steel making facility — into a modern-day, urban hydroponic farm,” Puri said.

The year-round growing at the site is a first for Gotham Greens. Its greenhouse is powered completely by renewable energy, and its techniques allow it to use less space and water than typical farms. Plus, it uses data systems to make growing more efficient.

The company plans to create 60 full-time jobs at the site. It’ll be hosting hiring events along with the Baltimore County Department of Economic and Workforce Development and the Center for Urban Families. The first is scheduled for March 11, where the company is also sponsoring a Maryland Food Bank “Pantry on the Go.”

Puri said the company aims to invite the community into space, as well.

“Our Baltimore greenhouse will serve as a resource to educate local residents and visitors on the benefits of sustainable, indoor farming by hosting free guided tours, as well as field trips for schools, universities and other local community organizations,” he said.

It’s the latest news from Baltimore County to herald a future of farming where produce is grown with tech-powered techniques, and closer to home. The arrival of the greenhouse comes a few months after New York-based startup Bowery Farming opened an indoor farm in White Marsh. That company uses a vertical farming model, which is distinct in approach from Gotham Greens.