Attorneys for EB-5 defendants may seek to delay October trial 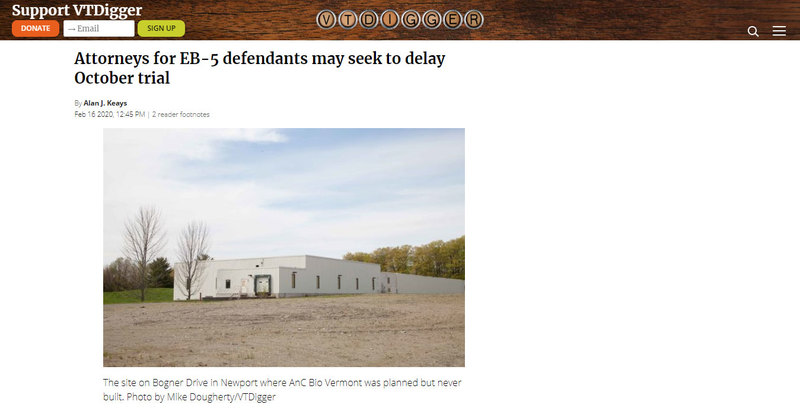 Attorneys for the developers accused of fraud in a failed biomedical research facility project in the Northeast Kingdom may soon file a formal request to postpone the trial currently scheduled for this fall.

Robert Goldstein, representing William Kelly, one of the criminal defendants in the federal case, said he and lawyers for the others charged in the same indictment are worried about having enough time to review documents.

“We want to continue to express some concern about the October trial date,” Goldstein told Judge Geoffrey Crawford during a hearing Friday in federal court in Burlington.

Goldstein stood at the same defense table in the courtroom as attorneys for two other defendants in the case, Ariel Quiros, Jay Peak’s former owner, and Bill Stenger, the resort’s former president, and CEO.

Goldstein said that given the massive amounts of discovery to review in the case, a “formal” filing seeking to move the trial back may becoming.

The attorneys say the prosecution has turned over more than 3 million pages of discovery material, or between 1 and 2 terabytes, and additional material is expected, they said.

“I’m glad to hear your motion,” Crawford told Goldstein, adding that the closer it gets to that trial date the “ever more concrete” it becomes.

Assistant U.S. Attorney Paul Van de Graaf, a prosecutor in the case, said after the hearing Friday that he is ready to proceed with the trial at the October date set by the judge.

Quiros, Stenger and Kelly, a key advisor to Quiros, were all indicted in May on charges stemming from a U.S. Attorneys office investigation that began in 2015.

They each face charges of wire fraud and making false statements to the federal government related to AnC Bio Vermont, a proposed $110 million biomedical research center in Newport that never got off the ground.

The AnC Bio Vermont project was “the crown jewel” of a massive Ponzi-like scheme at Jay Peak Resort involving eight projects and more than $400 million from more than 800 foreign investors. The Securities and Exchange Commission brought 52 counts of securities fraud against Quiros and Stenger in April 2016.

In exchange for permanent U.S. residency, each investor put up at least $500,000 for the Jay Peak projects through the EB-5 federal visa program run by the U.S. Citizenship and Immigration Service.

The two developers were accused of misusing $200 million raised through the federal EB-5 immigrant investor program to finance a series of projects in Vermont’s Northeast Kingdom, including large-scale upgrades at Jay Peak ski resort.

Both Quiros and Stenger have since reached monetary settlements in the civil cases against them, with Quiros agreeing to turn over to the federal government assets of more than $80 million, including Jay Peak ski resort.

At the hearing Friday in the criminal case, Quiros, who resides in Florida, was the only defendant who appeared in person. Both Stenger and Kelly had filed motions approved by the judge to waive their appearance at the hearing as they have done at earlier proceedings.

Hearings in the case have been held roughly every two months since the charges were filed in May.

Unlike past proceedings that have lasted at least a couple hours and as long as about four hours as lawyers debated issues ranging from discovery to whether the defendants can get a fair trial in Vermont, the hearing Friday was over in about 30 minutes.

The judge has said he scheduled the regular status conferences in the case, like the one Friday, to make sure it stays on track.

The defendants earlier this month were granted until April to file motions related to the trial, including whether they intend to seek to have one joint trial or will seek to each be tried separately.

A fourth defendant in the case, Alex Choi, a relative of Quiros, did not attend the hearing Friday.

Choi, who is from South Korea, has not attended any of the court proceedings since the indictments were returned in May, with prosecutors saying only that he remains at large.

The Newport project was pitched by the developers as a replica of a South Korean development. Choi was convicted in South Korea in 2016 of financial fraud associated with AnC Bio Korea.

Prosecutor Van de Graaf told the judge that it would be too difficult for the U.S. Attorney’s office to bring witnesses from South Korea for the trial.