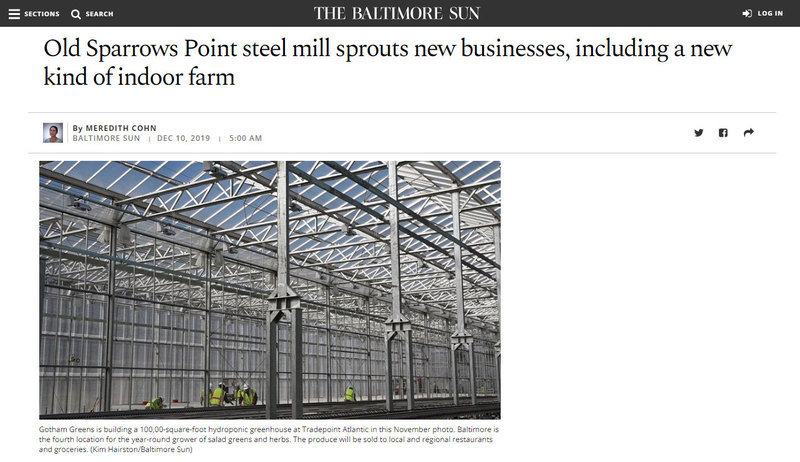 Gotham Greens is building a 100,00-square-foot hydroponic greenhouse at Tradepoint Atlantic in this November photo. Baltimore is the fourth location for the year-round grower of salad greens and herbs. The produce will be sold to local and regional restaurants and groceries. (Kim Hairston/Baltimore Sun)

The green shoots of a new business will sprout soon in a newly built steel-framed warehouse on the grounds of the shuttered steel mill in Sparrows Point.

This isn’t a metaphor. New York-based Gotham Greens is about to plant the first seeds in a 100,000-square-foot indoor hydroponic farm that expects to produce 6 million heads of butter lettuce, romaine, basil and other leafy crops a year.

The company’s lettuces and herbs are part of a growing global hydroponic market serving increasing demand for locally grown food with fewer environmental impacts. Owners of the industrial park and local officials also see the company and its produce as a symbol of the new economy at work on this property where tens of thousands were once employed in the dirty business of making steel.

“We’ll have the first harvest before the end of the year, with fresh produce available in local groceries and restaurants,” said Viraj Puri, co-founder and CEO of the company on a recent tour. “It won’t matter if there is snow outside. You’ll be able to get very fresh lettuce.”

Baltimore will be the private company’s fourth market, and a fifth is on the way. Puri said the greenhouses can produce 30 harvests annually, compared with the three or so from conventional, land-based farming.