Quiros, Stenger, Kelly weigh being tried together, or separately, in EB-5 fraud case 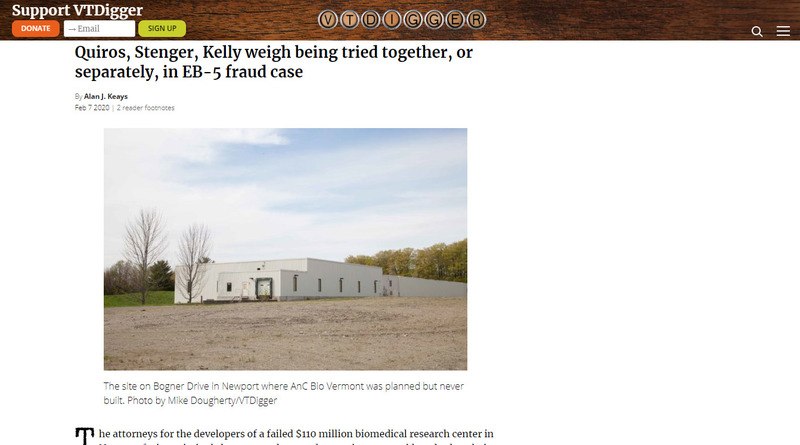 The attorneys for the developers of a failed $110 million biomedical research center in Newport facing criminal charges say they need more time to consider whether their clients should be tried together or separately.

The move comes as the lawyers for the developers were facing a Friday deadline to make that request. In response, Judge Geoffrey Crawford issued an order in federal court in Vermont extending the deadline to April 1.

The attorneys from Ariel Quiros, Jay Peak’s former owner, Bill Stenger, the resort’s past CEO and president, and William Kelly, a key adviser to Quiros, filed a joint motion this week in the criminal case saying they have more work to do before deciding how a trial or trials should proceed.

The attorneys wrote that before opting to seek to sever the trials — meaning having a separate trial for each defendant — they need time to review the massive amounts of discovery material in the case as well as conduct their own investigations into the allegations against their clients.

“As such, the defendants respectfully submit that, at this time, it is premature for the defendants to conclusively determine whether or not grounds for severance exist,” the filing stated.

“The defendants further submit,” the filing added, “that the additional time requested by the defendants will allow them to hone their defenses and to better assess whether or not there exist antagonistic defenses or other bases that would warrant severance in this matter.”

Currently, a joint trial for all three defendants is set for October 2020, and is expected to run several weeks.

It’s also possible that two defendants could agree to be tried together, but oppose being tried at the same time as the third.

U.S. Attorney for Vermont Christina Nolan and Assistant U.S. Attorney Paul Van de Graaf, the prosecutors, both declined comment Thursday on the matter, through a spokesperson.

McArthur did say that convincing a judge to sever a case and have separate trials is a challenging task since such motions are rarely granted.

Quiros, Stenger, Kelly, and Jong Weon (Alex) Choi were all indicted this spring on federal charges in Vermont.

The counts against them included wire fraud and making false statements regarding a proposed biomedical research center that never really got off the ground proposed for Newport, known as AnC Bio Vermont.

Quiros, Stenger, and Kelly have all pleaded not guilty to the charges against them. Choi, a business associate of Quiros and operator of AnC Bio Korea, which served as a model for the Newport proposal, has not yet been arraigned and his whereabouts remain unknown.

Robert Sand, a professor at Vermont Law School and a former Windsor County state’s attorney, speaking generally and not about this specific EB-5 case, said Thursday the issue of whether to have a separate or one joint trial is a complicated one for prosecutors and defense attorneys.

Prosecutors, he said, as a general rule tend to favor one joint trial, particularly in cases involving allegations of a scheme among defendants. “It’s a little bit of guilt by association,” Sand said of having multiple defendants stand trial in a case heard by one jury.

From a defense perspective, he said, defendants who consider themselves less culpable tend to prefer not to be tried along with ones considered to be more culpable.

In addition, Sand said, sequencing is an important factor as a defendant tried after another defendant’s trial may get a leg up. “You get the benefit of seeing all of the government’s evidence,” he added.

Another factor defense attorneys may consider in a case involving multiple defendants, Sand said, is the type of defense that each is raising.

For example, he said, there are cases with a joint defense where “all the interests are aligned,” as well as others with antagonistic defenses, such as one defendant pointing the finger of blame at another.

The indictment against the developers stated that they raised more than $80 million from 169 foreign investors through the federal EB-5 immigrant investor program for the AnC Bio Vermont project that didn’t get beyond some preliminary site work.

Prosecutors have accused the developers of misusing the funds raised for the project, and lying to the federal government about the status of the development.

The criminal case is scaled back from civil actions taken against Stenger and Quiros by both federal and state regulators. Those regulators accused the two men of misusing $200 million of the more than $350 million they raised for a series of EB-5 financed projects in the Northeast Kingdom, including massive upgrades at Jay Peak ski resort.

Both Stenger and Quiros reached monetary settlements in those civil cases, with both men neither admitting or denying the investor fraud allegations against them.