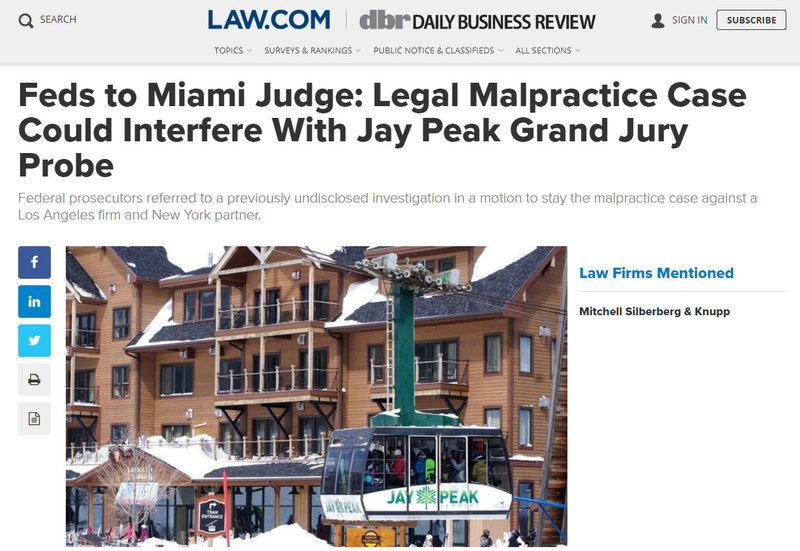 Federal prosecutors referred to a previously undisclosed investigation in a motion to stay the malpractice case against a Los Angeles firm and New York partner.

Federal prosecutors asked a Miami judge Thursday to halt proceedings in a $260 million legal malpractice lawsuit against a Los Angeles firm and a New York partner who worked on what turned out to be an EB-5 visa fraud because it could interfere with an active grand jury investigation.

The trio face fraud charges for allegedly operating a Ponzi scheme through their network of businesses, which included the Jay Peak ski resort in Vermont.

The malpractice case is against Mitchell Silberberg & Knupp and partner David Gordon, who worked on the Jay Peak project.

“The government’s pending criminal case and ongoing grand jury investigation will be detrimentally impacted” if the malpractice lawsuit against Mitchell Silberberg and Gordon is allowed to proceed, Zink wrote. The motion to intervene and stay the malpractice case was submitted by Zink and other federal prosecutors in Washington and Vermont.

The government indicated it has described the scope of the grand jury investigation to U.S. District Judge Marcia Cooke but not the other parties through a pending ex parte declaration.

Prosecutors accuse Quiros, Stenger and Kelly of ripping off foreign investors who thought they were pouring money into resort expansion and a biotechnology company that would be built in Newport, Vermont. The investors made their contributions through the EB-5 program to obtain U.S. lawful permanent residency in exchange for job-creating investments.

They are scheduled to go to trial in October, and the government said it expects the trial to last four to six weeks.

Mitchell Silberberg and Gordon are accused of plotting with Quiros and the others to mislead state and federal regulators probing their businesses, according to the malpractice lawsuit filed by Michael I. Goldberg of Fort Lauderdale, chairman of Akerman’s fraud and recovery practice and the receiver for Jay Peak and related businesses.

Asked about the government’s request for a stay and the existence of an ongoing grand jury investigation, Goldberg said in a statement, “We believe the government’s pleading speaks for itself, and we stand by the allegations we made in our complaint.”

The request for an 11-month stay is likely to be granted because both Goldberg and Mitchell Silberberg have consented to it, according to the filing.

Mitchell Silberberg and Gordon represented the businessmen as they were being investigated by the U.S. Securities and Exchange Commission and Vermont authorities. They have rejected Goldberg’s allegations that they conspired with Quiros and the others, saying all they did was provide legal advice “within the scope of representation.”

The SEC alleged Quiros and Stenger operated a “Ponzi-like” scheme in which more than $200 million of the $350 million they took from investors went to fund other projects, including $50 million on Quiros’ personal expenses. Their assets were frozen and placed into receivership.

Mitchell Silberberg and Gordon are being represented by a team of attorneys from Gunster led by Angel Cortinas and Jonathan Osborne. They filed a dismissal motion in the malpractice case Nov. 29 that accused Goldberg of “avarice” in his recovery tactics. They did not respond to requests for comment by deadline.