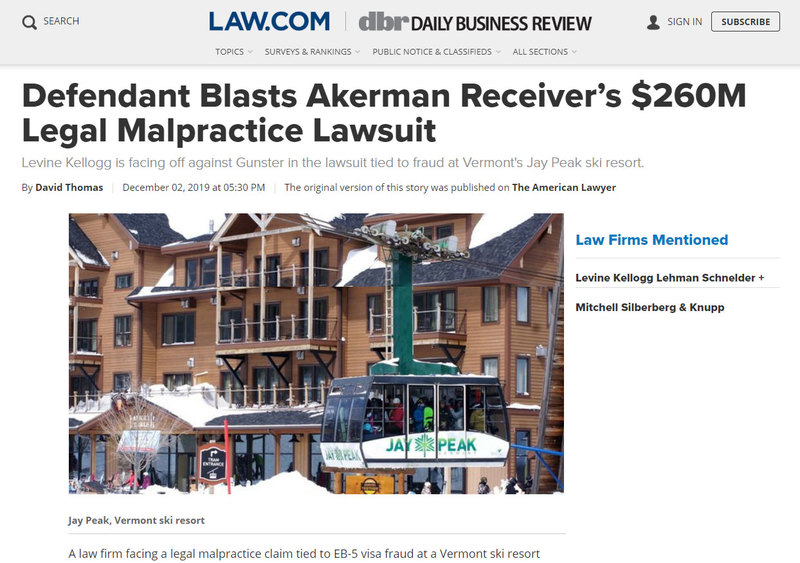 Levine Kellogg is facing off against Gunster in the lawsuit tied to fraud at Vermont's Jay Peak ski resort.

Goldberg, the chairman of Akerman’s fraud and recovery practice and the Jay Peak Inc. receiver,  claims the law firm and New York partner David Gordon conspired with the resort executives, who were investigated by the U.S. Securities and Exchange Commission and charged with criminal fraud.

Goldberg alleges, among other things, that the firm and Gordon misled state and federal regulators.

“In 75 paragraphs of new allegations, the receiver alleges that a lawyer and his law firm employer engaged to defend an SEC investigation somehow ‘conspired’ with clients subject to that investigation — based solely on legal advice provided within the scope of representation,” the Miami attorneys wrote in the law firm’s motion to dismiss. “To that end, the amended complaint laces benign allegations with words like ‘concoct,’ 'mislead,’ and ‘cover-up’ to ascribe nefarious intent where none exists.”

Mitchell Silberberg and Gordon represented Ariel Quiros, William Stenger and William Kelly as they were being investigated by the SEC in 2013 and later by the state of Vermont. In 2016, the SEC accused Quiros and Stenger of operating a “Ponzi-like” scheme, in which more than $200 million of the $350 million they took from investors went to fund other projects, including $50 million on Quiros’ personal expenses.

Much of the money came from foreign investors seeking EB-5 visas tied to job-creating investments in U.S. businesses.

The SEC actions led to the businessmen’s assets being frozen and placed in receivership. The U.S. attorney for Vermont followed up by filing criminal charges against Quiros, Stenger, Kelly and a South Korean national in May.

The indictment accused the four men of misleading and defrauding foreign investors who thought they were pouring money into a biotechnology company that would be built near the Newport, Vermont, resort.

Mitchell Silberberg said it worked with Quiros and the others on the SEC and other civil investigations and was paid $800,000 for the work. That’s way more than the $250 million Goldberg is alleging the firm and Gordon caused in damages, Mitchell Silberberg pointed out.

“The Amended Complaint is a rapacious attempt to transform a garden-variety legal malpractice lawsuit into an unsubstantiated criminal indictment of an attorney and law firm that acted at all times within the scope of representing clients,” the Gunster attorneys wrote. ”The receiver crosses the line of zealous advocacy and seeks to gain advantage in this civil case by trying to link a defense lawyer to his former clients’ alleged criminal conduct.”

Neither side responded to requests for comment by deadline.