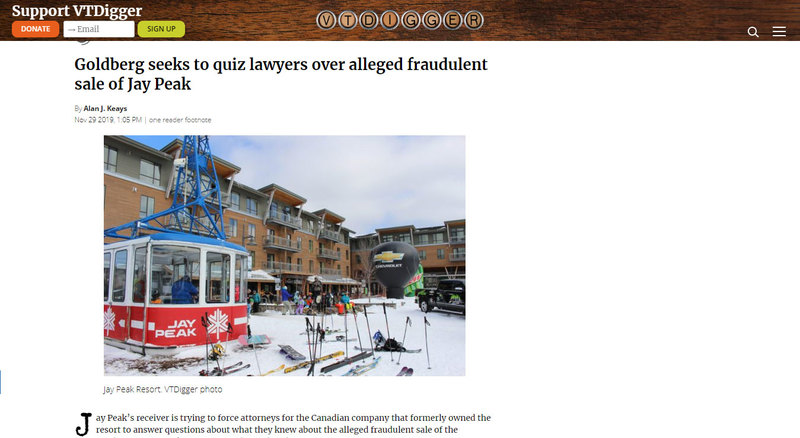 Jay Peak’s receiver is trying to force attorneys for the Canadian company that formerly owned the resort to answer questions about what they knew about the alleged fraudulent sale of the northern Vermont ski resort more than a decade ago.

Michael Goldberg, the receiver, is asking a federal court judge to allow him to move forward in deposing those attorneys as part of his lawsuit against the resort’s former owners seeking more than $80 million in damages.

Attorneys for Goldberg filed a recent motion in federal court in Vermont asking Judge Christina Reiss to issue a document called a “letter rogatory” to a Superior Court in Canada.

Goldberg is seeking to compel the deposition testimony of two attorneys who worked for Mont Saint-Sauveur International Inc., the company that owned Jay Peak in 2008 when it was sold to Ariel Quiros. Quiros allegedly orchestrated a massive fraud involving immigrant investor funds.

The receiver, in his lawsuit, claims the Canadian company, now known as Saint Sauveur Valley Resorts, fraudulently accepted $18 million in EB-5 immigrant investor funds from Quiros as part of his payment for the ski resort in 2008.

A letter rogatory is used to make a formal request of a court in another country to obtain information, evidence or testimony from a person residing in that country.

Goldberg is seeking to take the depositions of lawyers Alwynn Gillett and Janice Naymark, who are both in private practice in Montreal.

According to Goldberg’s filing, the two attorneys represented Saint Sauveur Valley Resorts at the time of the sale in 2008, and have refused to appear for depositions in Montreal without “formal service of process.”

The receiver’s filing added that documents produced as part of discovery in the case shows that the attorneys “gave counsel” to the Canadian company, “which directly resulted in the transfer of $18 million of investor funds, which Quiros ultimately used to acquire” Jay Peak.

“Goldberg alleges that SSVR aided and abetted the fraudulent scheme with knowledge of the improper and illegal nature of its actions, and thereby took receipt of funds in excess of $21.9 Million, ostensibly tendered by Quiros, as part of payment for the purchase of the assets of the Resort,” the filing stated. “Gillett and Naymark were the closing attorneys for the transaction.”

He contends in a filing that depositions of a party’s attorneys are “disfavored,” and rarely granted by judges due to attorney-client privilege.

In addition, according to Pocius, the information Goldberg is seeking may be obtained from other sources.

Pocius added that Goldberg has not moved to depose any other witnesses, or reviewed more than 900,000 documents “in his control” related to the case.

“It is therefore ludicrous for (Goldberg) to state that he has a ‘need’ for the depositions, he ‘exhausted’ all other avenues to obtain the information, or that the extent of discovery conducted to date weighs in favor of mandating these depositions,” Pocius wrote.

Goldberg, in a counter filing, contended that the testimony of the attorneys go to the heart of his case.

“An issue of central importance to Plaintiff’s claim concerns the circumstances which put investor monies in Ariel Quiros’ control prior to closing such that he could use them for purchase of the shares of Jay Peak, Inc. and thereby accomplish the very first step of the Ponzi scheme,” the filing stated.

The investors believed they were investing in the first construction projects at the resort, unaware their funds, $500,000 each, had been used by Quiros to help buy the resort.

Bill Stenger, the former CEO of Jay Peak, was in charge of the EB-5 program at Jay Peak for Saint Sauveur, at the time, and was instrumental in the sale with Quiros, according to court filings.

The money from foreign investors for the Tram Haus Lodge and Hotel Jay projects was expected to be legally bound in separate escrow accounts for each project.

But, when Saint Sauveur sold Jay Peak to Quiros, regulators and Goldberg alleged, he used the EB-5 money, which was to be kept in escrow for the two projects, to purchase the resort.

Over time, Quiros and Stenger solicited new investors to backfill funding for the two hotel projects, according to filings.

Before state and federal regulators took civil enforcement actions in April 2016 against Stenger and Quiros, the pair had raised more than $400 million in EB-5 investor funds for a series of projects at Jay Peak and the Northeast Kingdom.

Those projects included condo developments at Jay Peak as well as a hotel and conference center at Burke Mountain.

One of the last projects proposed by the two developers, a $110 million biomedical research center in Newport known as AnC Bio Vermont, has been termed by the U.S. Securities and Exchange Commission as “nearly a complete fraud.”

In May, federal prosecutors charged Quiros and Stenger, and two of their associates, with fraud and providing false statements to the government related to the biomedical research center project.

The developers have pleaded not guilty to those charges and are awaiting a trial currently set for October 2020.

Goldberg, as the receiver overseeing the properties at the center of the EB-5 scandal, including Jay Peak, is now the lead plaintiff in the lawsuit against Saint Sauveur.

He has argued in court filings that the actual damages against Saint Sauveur could surpass many times the resort’s sale price, reaching more than $80 million.

scheme that bilked EB-5 investors out of many more millions of dollars than just the sale price of the resort, according to filings submitted in the case on the receiver’s behalf.

Lawyers for Saint Sauveur aren’t buying Goldberg’s argument and have called his claim regarding damages “preposterous.”

They say that since the receiver now possesses the resort, as well as other completed projects funded by the EB-5 investments, the receiver shouldn’t be entitled to damages on top of the assets he already has in hand.

Attorneys for Saint Sauveur Valley Resorts also contend that the company at the time of the bank transfers had sent a letter to Raymond James and Associates, Quiros’ financial services firm.

In that letter, the Canadian company stated that money for those EB-5-funded projects “may not be used in any manner” to pay for Jay Peak, according to an SEC filing.

An attorney for the investors, Keith Miller, argued during a hearing in the case last year that the notice was nothing more than a “protect your ass” letter, and the company knew all along that Quiros would be using those funds to pay for the resort.

Neither Goldberg, nor Pocius, an attorney representing Saint Sauveur, could be reached for comment.