Court in securities-fraud case rules against former Palm Beach developer, with his consent 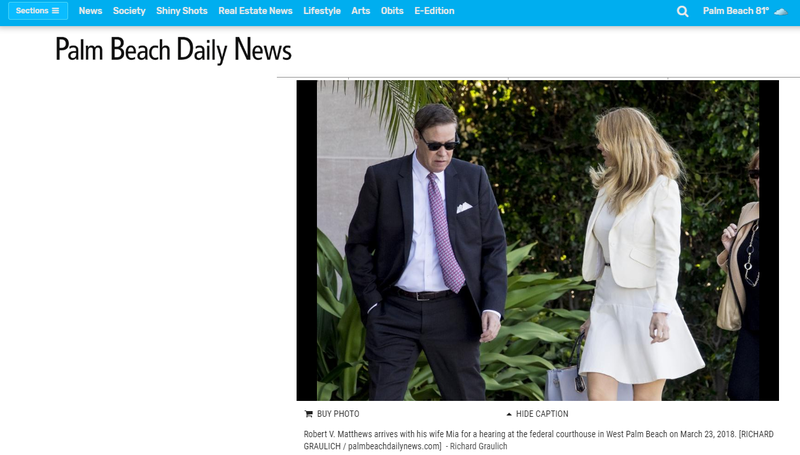 A federal court has ruled against former Palm Beach developer and convicted felon Robert V. Matthews in a civil case brought by the Securities and Exchange Commission, which claimed he had defrauded foreign investors who put money into his never-completed Palm House hotel-redevelopment project in Palm Beach.

U.S. District Judge Donald M. Middlebrooks on Wednesday issued the judgment in favor of the SEC with the consent of Matthews, according to court filings in the U.S. District Court for Florida’s Southern District. Matthews had initially denied the charges after the SEC filed its original complaint in August 2018.

Matthews’ consent document noted that he has pleaded guilty in a federal district court in Connecticut “to criminal conduct related to certain matters alleged in the [SEC’s] complaint” including conspiracy to commit wire and mail fraud.

The consent agreement in the SEC case says Matthews “admits and incorporates into this consent” the same statements “he submitted in connection with his plea agreement” in Connecticut.

Matthews guilty plea came in April and he is awaiting sentencing in the Connecticut case.

Among the penalties levied in the SEC case, Middlebrooks ordered that Matthews “is permanently restrained and enjoined from violating, directly or indirectly” U.S. securities exchange laws “by using any means or instrumentality of interstate commerce, or of the mails, or of any facility of any national securities exchange, in connection with the purchase or sale of any security.”

Middlebrooks also ordered: “Upon motion of the [SEC], the court shall determine whether it is appropriate to order disgorgement of ill-gotten gains and/or a civil penalty” and, if so, would set the amount that must be paid.

Matthews is no longer involved in the Palm House, which was sold, unfinished, in May for nearly $40 million after years of civil and criminal legal entanglements in federal and state courts. The sale to a hotel-and-resort investment company was authorized by a federal bankruptcy judge in West Palm Beach. That court is overseeing a corporate-bankruptcy case filed by the Palm House’s former court-appointed receiver on behalf of the Palm House’s former ownership company.

Prosecutors in Connecticut say Matthews and others took part in a criminal scheme to defraud foreigners who put money into the Palm House project under the federal EB-5 program, which offered investors the opportunity to get expedited immigration papers, commonly known as green cards. Most of the investors were Chinese and were told the Palm House would be developed and opened as an ultra-luxury hotel-condominium, according to court filings.

Matthews initially pleaded not guilty in the criminal case, which was filed in March 2018.

The SEC this year asked the court to enter a “default judgment” against Walsh after the agency said he lived at “an unknown address” in China and had “abandoned his defense” in the case by refusing to adequately respond to the allegations against him.

The SEC’s complaint claims Walsh helped defraud at least 88 foreign nationals out of as much as $43.9 million earmarked for the Palm House between November 2012 and March 2015.

Walsh, in a December court filing, denied the SEC allegations. The court has not yet issued a response to the SEC’s request for the default judgment, the court docket shows.

Matthews’ consent agreement in the SEC case was filed July 1. A jury trial in the case had been set for December.

In his consent — and echoing his plea agreement in the Connecticut case — Matthews acknowledged that beginning in or around 2011 and continuing through “in or around” January 2018, he “knowingly agreed with others to defraud and obtain money and property from [EB-5] investors ... by means of material misrepresentations in connection with the Palm House,” according to the agreement.

The consent document was drafted by Alejandro O. Soto, the attorney representing the SEC in Miami. Alejandro said the agency could not comment on Wednesday’s court actions because litigation remains ongoing.

Attorney Christopher W. Kammerer, Matthews’ attorney, could not be reached for comment.

“Specifically,” the agreement says, “Matthews and others falsely and fraudulently represented to EB-5 investors that investor proceeds would be used exclusively to acquire, develop and operate the hotel. Matthews made these material misrepresentations in connection with the offer and sale of securities.”

But instead, Matthews “misappropriated investor proceeds to purchase for Matthews’ benefit” a house at 115 Lower Churchill Road in Washington Depot, Connecticut, the consent document says. A wire transfer of $2.6 million, drawn from investor proceeds, was sent from a bank account in Palm Beach to a bank in Connecticut, and Matthews used a “shell company” to deceive the bank that then owned the house into selling it, according to the consent agreement.

The document also mentions Matthews’ wife, Mia Matthews: “In or around November 2014, Matthews caused his wife to execute documents to obtain a loan secured by the Lower Church Hill residence.” The proceeds of the loan went into an account controlled by the couple, and Robert Matthews then used that money to pay personal expenses, the consent agreement says.

Mia Matthews pleaded guilty to a single count of tax evasion in the Connecticut case, as did her husband. She also is awaiting sentencing.

In addition to Robert and Mia Matthews, two other men have accepted plea agreements in the Connecticut case — construction executive Nicholas Laudano and Gerry Matthews, Robert Matthews’ brother. They also have not yet been sentenced.

Palm Beach attorney Leslie R. Evans, meanwhile, is awaiting trial in Connecticut in December on felony charges related to the Palm House that include wire fraud; bank fraud; conspiracy to commit bank fraud and wire fraud; and illegal monetary transactions. Evans has pleaded not guilty to the charges. He was not named as a co-defendant in the SEC complaint, nor were Laudano or Gerry Matthews.