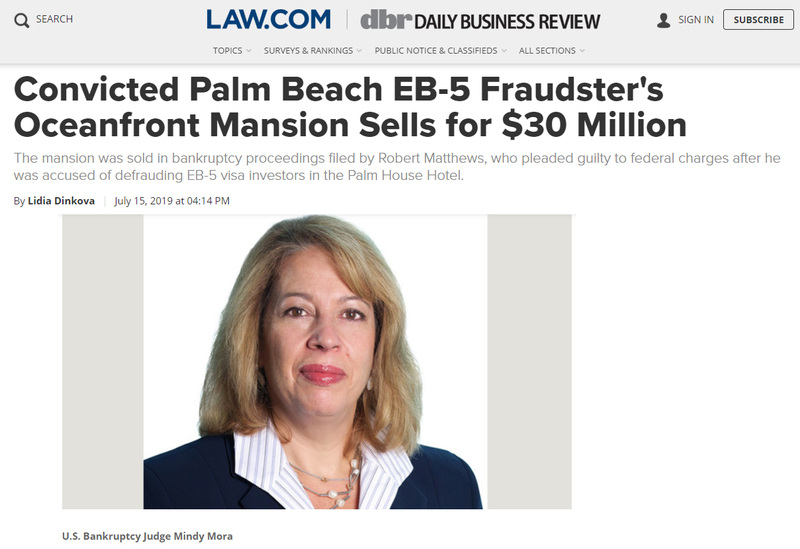 The mansion was sold in bankruptcy proceedings filed by Robert Matthews, who pleaded guilty to federal charges after he was accused of defrauding EB-5 visa investors in the Palm House Hotel.

An oceanfront Palm Beach mansion that belonged to an embattled developer and admitted EB-5 fraudster Robert Matthews sold for over $30 million.

The 15,849-square-foot mansion constructed in 2006 on nearly an acre at 101 Casa Bendita was sold as part of Matthews’ two-year bankruptcy proceeding. U.S. Bankruptcy Judge Mindy Mora In West Palm Beach approved the sale April 8, and the deed was signed July 9.

The Chapter 11 filing is one of several legal proceedings involving Matthews, who pleaded guilty in Connecticut federal court to charges related to an EB-5 visa fraud targeting investors in the Palm House Hotel.

DB Private Wealth Mortgage Ltd., the first mortgagee on the mansion and an affiliate of Deutsche Bank, won the foreclosure lawsuit on the property for over $26 million.

Mora approved Matthews’ reorganization plan last December, including the sale of the Palm Beach mansion at auction for the benefit of DB Wealth and to pay off its claim, which by then had increased with interest. The minimum bid amount was set at $31 million.

No one bid on the property and the mansion then was transferred to DB Wealth’s affiliate, Singer Island Tower Suite LLC, under the approved plan. Matthews was ordered to vacate the mansion purchased in 2006 for $14.95 million.

Singer Island sold it to the Gureghians for $30.275 million free and clear of liens and encumbrances.

Vahan Gureghian, whose business ventures extend to the media and telecommunications industries, is the founder of Chester, Pennsylvania-based charter school management company CSMI LLC. It runs administrative aspects of schools such as the facilities, human resources, accounting, technology, vendors, grants and front offices, according to its website.

Gureghian was a partner at Stradley Ronon Stevens & Young and Obermayer Rebmann Maxwell & Hippel as well as managing partner at Clark & Ladner.

He and his wife run the philanthropic Gureghian Family Foundation.

Other assets Matthews lost during his bankruptcy are a 1999 Jaguar XJ8 and a 2011 Maserati.

Matthews was a former owner and developer of the Palm House Hotel. The salmon-colored Palm Beach building was envisioned as a 79-unit hotel-condominium with help from EB-5 investors. But federal authorities charged at least some of the $44 million of visa funding was siphoned off for personal debts, a yacht, and other fraudulent uses.

Matthews in April admitted in Connecticut federal court that he defrauded the foreign investors by telling them their money would go toward the development. He also admitted inducing foreigners to invest by paying celebrities and politicians would be involved and “will be part of the club.” A civil suit filed by the investors alleged Matthews listed Celine Dion, Bill Clinton, and Bill Koch as Palm House board members.

Mathews was accused of using some of the funds to buy two high-end homes in Connecticut’s Washington Depot. Matthews and his wife, actress Maria “Mia” Matthews, were indicted by a Connecticut grand jury last August.

The tax evasion counts charged the power couple tried to avoid paying federal income taxes from 2005 to 2007 by using limited liability companies and their attorney’s trust account to pay for personal expenses.

The Palm House Hotel is poised for a new chapter after its purchase by London-based hotel company, London + Regional Properties, for $39.6 million.

As for the proceeds from the mansion sale, mortgagee affiliate Singer Island Tower Suite will reimburse $30,000 for the broker’s marketing campaign, $15,000 for attorney fees and closing agent expenses, and $100,000 for the unpaid administrative fees and costs to the liquidating agent.