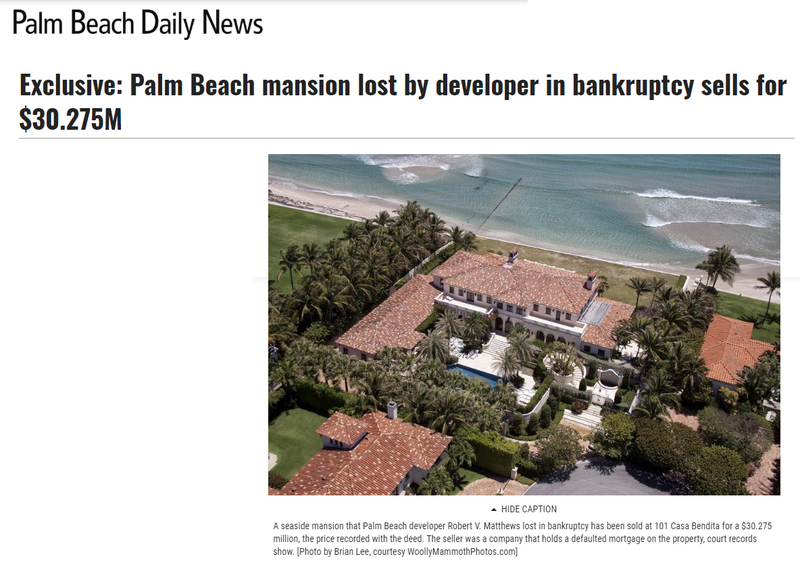 Mortgage-holder sells the former home of Robert V. Matthews to the couple who just sold a Palm Beach mansion for more than $40 million.

As developer Robert V. Matthews awaits sentencing on felony conspiracy and money-laundering charges in Connecticut, the Palm Beach seaside mansion he completed in 2006 has changed hands for a recorded $30.275 million.

The deed recorded today shows the house at 101 Casa Bendita was sold by Singer Island Tower Suite LLC, which took the title in April via a bankruptcy judge’s order in Matthews’ Chapter 11 case. The seller is identified in court documents as an “assignee” of a Deutsche Bank affiliate owed $31 million from a mortgage it held on the property.

Matthews moved out of the mansion with his wife, Mia, shortly after the bankruptcy court’s March 31 order. Matthews developed the long-troubled, never-finished — and since-sold — Palm House hotel-condominium at 160 Royal Palm Way, which is a focus of his federal criminal case in Connecticut.

The six-bedroom, two-story residence on Casa Bendita has 15,849 square feet of living space, inside and out, on nearly an acre. With about 188 feet of beachfront, the property lies about three-quarters of a mile north of Royal Palm Way.

As previously reported by the Daily News, the buyers in this week’s sale are Philadelphia attorney and businessman Vahan Gureghian and his attorney wife, Danielle. Two weeks ago, they sold their never-lived-in oceanfront mansion on 2 acres at 1071 N. Ocean Blvd. for more than $40 million. That 35,992-square-foot mansion had been on the market for about four years.

Douglas Elliman Real Estate agents Gary Pohrer and Vince Spadea tried to negotiate a last-minute deal for the Gureghians to buy the former Matthews house minutes before the March 31 bankruptcy-court hearing was scheduled to start. Pohrer negotiated with representatives of the mortgage holder in a hallway outside the courtroom.

But the mortgage holder didn’t agree to the terms of the Gureghians’ offer, which Pohrer wouldn’t disclose to the Daily News. Vahan Gureghian confirmed he had been on the phone with Pohrer during those courthouse negotiations and said talks continued for several weeks until “we were finally able to come to an agreement with Deutsche Bank.”

Vahan Gureghian is involved in a number of businesses, he said, including management and consulting in the charter-school industry through a company he founded, CSMI Education Management. His wife provides legal counsel for his business ventures, he said.

He also is a trustee of the University of Pennsylvania and the Villanova University Business School. He serves on the board of directors for the Philadelphia Regional Port Authority. The Gureghians, who have been leasing a penthouse on Breakers Row, also run a charitable foundation.

Robert Matthews completed the Mediterranean-style mansion in 2006 as a custom home for his family and had it homesteaded in the Palm Beach County tax rolls. At the end of a cul-de-sac, the two-story, L-shaped house has a pool-courtyard design. It features an extensive seaside loggia, balconies, a cabana, a media room and a library-and-den, according to previous sales listings.

Delaware-registered Singer Island Tower Suite LLC, the seller in this week’s deal, is listed in property records with an address on the 14th floor of 345 Park Ave. in New York City. In June 2018, the company took over the loan note and mortgage from the original mortgage holder, DB Private Wealth Mortgage Ltd., court documents show.

Gureghian told the Daily News this month that he and his wife are planning cosmetic and mechanical improvements to the house this summer to get it ready to use next season.

Douglas Elliman agent Ashley McIntosh led a team comprising Pohrer and Spadea in representing the Gureghians in the July 1 sale of their beachfront mansion. The same agents handled the buyer’s end of the former Matthews house, which wasn’t advertised in the local multiple listing service when it sold. Vahan Gureghian said he has for seven years played tennis with Spadea, a former professional player, and was introduced to Douglas Elliman through that relationship.

In the sale of the Gureghians’ mansion on North Ocean Boulevard, broker Lawrence Moens of Lawrence A. Moens Associates represented the buyer, a Florida-registered limited liability company named Reiwa LLC. The real estate agents involved in both sales declined to comment.

Gureghian and his wife admired the Casa Bendita house’s custom finishes and fine materials when they were house-hunting a few years ago, Gureghian said.

“We fell in love with the property and thought it was perfect for us. The design of the Casa Bendita house is great for the lot — it’s very private,” he said.

Michael Gureghian, one of the couple’s two sons, still lives at home but will be going to college in three years, Gureghian said. Once that happens, he and his wife plan to spend about half the year in Palm Beach, he said.

Last year, fashion designer Tommy Hilfiger and his wife, Dee Ocleppo, sold their beachfront house next door to 101 Casa Bendita for a recorded $35 million. That house at 100 Casa Bendita is smaller than the Gureghians’ new home but has more beachfront —203 feet.

The house the Gureghians just bought had been scheduled for a number of court-authorized auctions over the past several years but never sold. Auctions initially were scheduled to satisfy a $26.25 civil foreclosure judgment issued in 2016 in favor of DB Private Wealth Mortgage Ltd., a Deutsche Bank affiliate. The foreclosure involved an unpaid 2008 mortgage-related note for $24 million.

But attorneys for Robert Matthews got every auction postponed. In late 2017, Matthews declared voluntary bankruptcy in federal court, a move that called a halt to the civil case.

The house then proceeded toward a court-sanctioned bankruptcy auction scheduled earlier this year. But when that March 28 auction failed to attract any “qualified” bidders, bankruptcy Judge Mindy Mora instead awarded the property’s title to the mortgage holder.

Plea deals in the criminal case

Robert Matthews has pleaded guilty to felony charges of conspiracy, money laundering and tax evasion related to the Palm House. His wife has entered a similar plea deal by pleading guilty to a sole count of tax evasion. They and two others who have accepted plea deals in the case await sentencing in a Connecticut federal district court. One other defendant has pleaded not guilty to charges in the case and is awaiting trial.

The so-called “non-secured” claims in Robert Matthews’ personal bankruptcy case include those made by dozens of foreign investors who put money into the failed Palm House renovation project under the federal EB-5 program. According to various court documents, those investors put millions of dollars into the Palm House with expectations of having the federal government expedite so-called immigration “green cards” for them and their families.

In addition to the criminal case in Connecticut, the Palm House and the EB-5 investors are at the center of a civil case filed by the Securities and Exchange Commission that alleges securities fraud.

In a court-approved sale earlier this year, a North American affiliate of London + Regional Properties bought the Palm House property for $39.6 million.