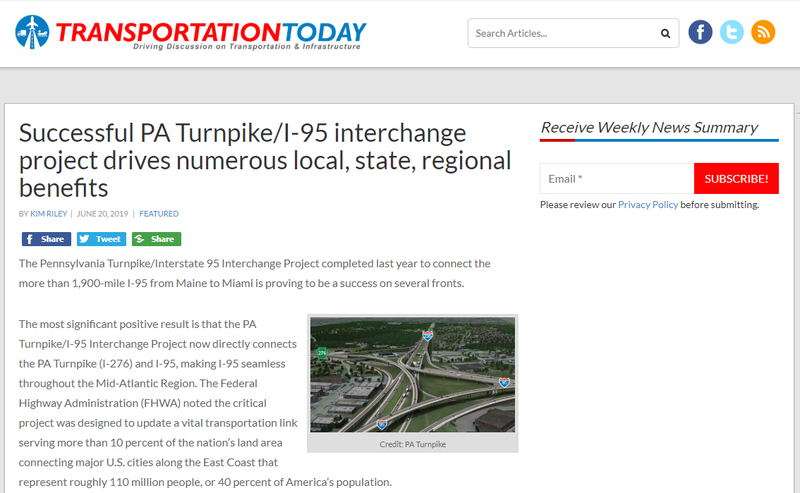 The Pennsylvania Turnpike/Interstate 95 Interchange Project completed last year to connect the more than 1,900-mile I-95 from Maine to Miami is proving to be a success on several fronts.

The most significant positive result is that the PA Turnpike/I-95 Interchange Project now directly connects the PA Turnpike (I-276) and I-95, making I-95 seamless throughout the Mid-Atlantic Region. The Federal Highway Administration (FHWA) noted the critical project was designed to update a vital transportation link serving more than 10 percent of the nation’s land area connecting major U.S. cities along the East Coast that represent roughly 110 million people, or 40 percent of America’s population.

The new interchange — along with the re-designation of parts of the New Jersey and Pennsylvania turnpikes — finally completes I-95’s missing link, making the interstate continuous and marking the completion of the original Interstate system decades after the law that created the network of highways was signed in 1956, according to the Pennsylvania Turnpike Commission (PTC), which helped fund the project.

Officials from the PTC, FHWA, the Pennsylvania Department of Transportation (PennDOT), and representatives from ground-transportation agencies in neighboring states last fall joined to commemorate the completed, major Stage 1 components of the PA Turnpike/I-95 Interchange Project, officially opening it up for motorists and truckers on Sept. 24, 2018.

“As the Stage 1 movements have been opened and are now becoming more steadily utilized, project representatives and local officials have received positive feedback from motorists and Pennsylvania Turnpike customers,” Carl DeFebo, director of public relations and marketing at the PTC, told Transportation Today.

Congress created the EB-5 Program in 1990 to stimulate the U.S. economy through job creation and capital investment by foreign investors. In 1992, Congress also created the Immigrant Investor Program, a.k.a. the Regional Center Program, to set aside EB-5 visas for participants who invest in commercial enterprises associated with regional centers approved by U.S. Citizenship and Immigration Services (USCIS).

The USCIS, which administers the EB-5 Program based on proposals for promoting economic growth, estimates that there has been $20 billion in EB-5 capital investment from fiscal year 2008 through FY 2017.

“The EB-5 program provides a source of low-cost financing as compared to traditional bond financing,” DeFebo explained. “The PTC borrowed $200 million in EB-5 funds for Phase One of the I-95 Link — which carries a price tag of $420 million.”

He said the PTC estimates that the EB-5 program saved the commission about $35 million compared to traditional financing.

The EB-5 program is essentially a jobs-creation program because prospective projects must create jobs to qualify.

“In order to qualify for the EB-5 program, the I-95 project needed to create a minimum of 4,000 jobs,” DeFebo said. “An economic impact study actually showed that the project created 5,000 jobs.”

DeFebo also noted that the PTC’s agent for the program was the Delaware Valley Regional Center(DVRC), which is actively marketing the investment opportunity to foreign investors.

The DVRC was designated as a “Regional Center” under the EB-5 Immigration Investor Pilot Program for the specific purpose of investing foreign funds into new regionally significant infrastructure projects in the Delaware Valley and was approved by USCIS in May 2014, he said.
The process could become a model for how other states and localities fund transportation projects around the country.

In fact, a recent study on the economic impact of the EB-5 Regional Center Program released by the EB-5 Investment Coalition in cooperation with Invest in the USA, found a total of $10.98 billion of capital investment in EB-5 projects throughout the United States supported more 355,000 U.S. jobs, roughly 6 percent of all job gains over a two-year period.

“Long-term financing makes sense for such a massive infrastructure project because it helps to spread the cost of the project out over the life of the asset being funded (an interchange, in this case),” explained DeFebo.

The generations of travelers who will help to fund the debt-service payments via toll dollars also are winners, he said, because they’ll reap long-term benefits in the form of saved travel-time and fuel savings, as well as added safety and the convenience that the I-95 link provides.

DeFebo also described other favorable outcomes of the project.

“Signing improvements along the interstates and implementation of Intelligent Transportation Systems infrastructure to alert motorists of incidents or anticipated work in the area” are also considered beneficial, he said.

Subsequently, the project also has provided “a renewed sense of optimism from the local communities regarding enhanced connections, safer and more efficient travel, and economic development opportunities to allow the area to compete regionally and along the Atlantic Coast,” he said recently.

Another major benefit is the increased capacity both for the interstates and for connections to the PA Turnpike (I-276) and I-95.

“Mobility drives economies, and better access to transportation for goods and employees attracts industry,” DeFebo said. “From a market attractiveness standpoint, we’re looking at employment growth of thousands of regional jobs along with hundreds of millions of dollars in new business sales.”

For instance, the opening of the Stage 1 flyovers has allowed interstate travelers to maintain highway speeds of 55 mph in the connection from the City of Philadelphia along the Pennsylvania and New Jersey turnpikes and into New York City seamlessly, said DeFebo.

“In addition to satisfying the original goals of the interchange project, several other positive impacts to the community have resulted from the opening of the first two interchange movements,” said DeFebo, who cited the project’s environmental benefits.

In fact, DeFebo said that the construction of wetland and stream mitigation sites account for impacts of the project and updated environmental regulations.