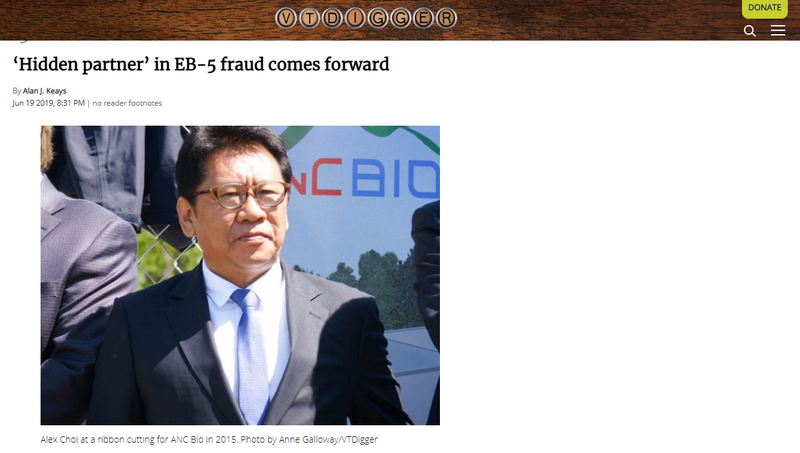 Alex Choi at a ribbon cutting for ANC Bio in 2015.

It appears the “hidden partner” in the Northeast Kingdom EB-5 scandal has been found, or at least he’s in contact with the Vermont court where he has been charged in the largest fraud case in the state’s history.

All three were arraigned in federal court in Burlington on criminal charges, ranging from wire fraud to providing false statements to the federal government regarding AnC Bio Vermont, a proposed biomedical center for Newport that never got off the ground.

A fourth man named in that indictment, Jong Weon (Alex) Choi, the operator of AnC Bio Korea and described in the charging documents as AnC Bio Vermont’s “hidden partner,” did not appear for an arraignment.

U.S. Attorney Christina Nolan said at that time that he was “at large.”

Kraig LaPorte, a spokesperson for the U.S. Attorney’s Office in Vermont, said Wednesday he could not comment on the matter.

Jerome O’Neill, a Burlington attorney and former federal prosecutor in Vermont not connected to the EB-5 case, said Wednesday that the filings appear to show that Choi likely won’t be “at large” much longer.

“I think it is clear from those documents that he either has been found or has indicated that he will turn himself in for purposes of prosecution,” O’Neill said. “For that reason the court has found that he qualifies for the appointment of counsel and has appointed counsel for him.”

The money was raised over an eight-year span to fund massive redevelopment projects, including hotels and waterparks, at Jay Peak, as well as the Northeast Kingdom towns of Burke and Newport where the biomedical research facility had been planned.

Choi’s AnC Bio Korea was also the focus of an investor fraud scheme in South Korea. The Vermont project was pitched by the developers as a replica of that South Korean development.

Choi was convicted in South Korea in 2016 of financial fraud associated with AnC Bio Korea, according to the indictment filed in Vermont. It’s unclear where he was living at the time of the indictment.

More than $90 million was raised for the Vermont AnC Bio project from over 160 immigrant investors through the federal EB-5 visa program. But nothing was ever built.

Quiros, Stenger and Kelly have pleaded not guilty to the federal charges brought against them last month. They have each been released after signing for $100,000 appearance bonds.