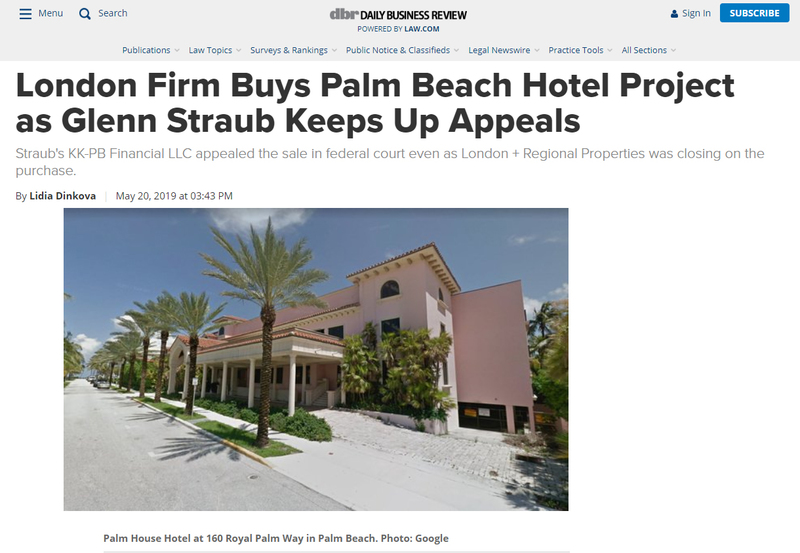 Straub's KK-PB Financial LLC appealed the sale in federal court even as London + Regional Properties was closing on the purchase.

An unfinished hotel-condominium in Palm Beach at the center of an alleged massive EB-5 visa fraud has been sold to a London hotel company.

An affiliate of London + Regional Properties bought the Palm House Hotel for $39.6 million on May 14, Palm Beach County property records show. The sale went through even though Wellington developer Glenn Straub is waging a legal battle to a share of the sale price.

The Palm House was envisioned as a 79-unit hotel condominium financed by foreigners who invested in the EB-5 program, which grants green cards in exchange for $500,000 placed in a U.S. commercial venture that creates at least 10 jobs.

Instead, a developer and associates allegedly schemed to siphon some of the funds for personal use, while the salmon-colored property remained unfinished on one of the affluent enclave’s few retail strips at 160 Royal Palm Way.

In April, the previous Palm House developer, Robert Matthews, pleaded guilty to charges connected to the EB-5 fraud scheme and faces up to 45 years in prison. His wife, actress Maria “Mia” Matthews, pleaded guilty to tax evasion and faces up to five years imprisonment. A Connecticut grand jury had charged the two last August in a superseding indictment.

Straub, through his KK-PB Financial LLC, has been fighting 160 Royal Palm at nearly every step, first asking to credit bid and then appealing.

KK-PB Financial has claimed a $39 million secured interest in the Palm House based on a $27.5 million mortgage it issued for the property six years ago. Kimball rejected the claim and KK-PB’s credit bid plan.

Kimball on March 14 denied KK-PB’s emergency motion to stay his previous orders, including the approval of the sale to London + Regional.

If the stay were granted, London + Regional might withdraw its offer, potentially costing the property and investors “the benefit of the highly beneficial contract approved in the sale order.”

U.S. District Judge Robin Rosenberg on April 10 affirmed all of Kimball’s orders appealed by KK-PB, which took its case to the U.S. Court of Appeals for the Eleventh Circuit.

“This expedited 10-day private sale process by the debtor has been about one thing — racing to consummate the private sale between the debtor and LR to prevent KK-PB Financial’s principal, Mr. Glenn Straub, from purchasing the hotel,” wrote KK-PB attorney Jim Robinson, a White & Case partner in Miami. He didn’t return a request for comment by deadline.

Related Cos. was approved as the stalking-horse bidder when the property was heading to auction.

In court papers, some of the EB-5 investors said they are owed $22.5 million and others were owed an additional $27.8 million.

“The town will get a legitimate hotel operator and developer into ownership of this high profile property with the will and wherewithal to complete the Palm House Hotel and likely make it a gem, even if not the tiara that its previous developers falsely promised it would be,” the investors wrote in their filing.

London + Regional’s attorney, Akerman partner Eyal Berger in Fort Lauderdale, declined to say what the hotel company will do with the property or a redevelopment timeline.