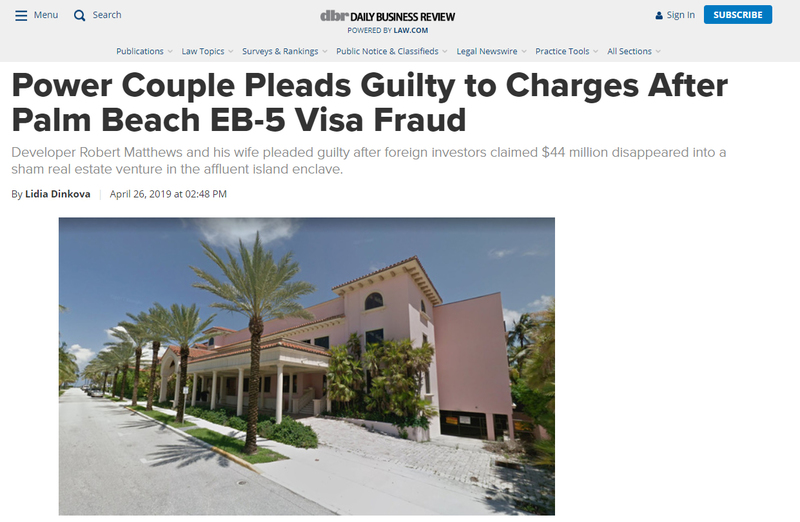 A power couple pleaded guilty to federal charges after they were accused of supporting a lavish lifestyle with money invested in a splashy Palm Beach real estate venture by foreigners seeking EB-5 visas.

The criminal case followed an accumulation of civil cases tied to the unfinished Palm House Hotel at 160 Royal Palm Way on the posh island retreat. The Securities and Exchange Commission charged 88 investors put nearly $44 million into the venture from 2012 to 2015.

The project was envisioned as a 79-unit hotel condominium financed through the EB-5 visa program giving green cards to foreigners and their families in return for investing at least $500,000 in a U.S. commercial venture that creates at least 10 jobs.

As a former developer, Robert Matthews packaged a slew of misrepresentations with his offering. In reality, a Connecticut grand jury charged investors’ money was used to pay for their two houses in Connecticut’s Washington Depot, a 151-foot yacht and credit card bills.

Matthews admitted telling investors that celebrities, politicians and well-known businesspeople “will be part of the club” and some of them would sit on the Palm House Hotel advisory board, prosecutors said.

Robert Matthews admitted scheming to defraud J.P. Morgan Chase Bank N.A. by misappropriating insurance proceeds intended for one of his homes from December 2010 to January 2013.

The other home at 115 Lower Church Hill Road belonged to Matthews, but he lost it to JPMorgan in foreclosure and bought it back at a deeply discounted price using a limited liability company as a straw buyer,

Robert Matthews also was accused of selling a Mercedes-Benz for $82,000, paying off a lien and wiring the sale proceeds to a trust account that belonged to an attorney also charged in the scheme.

The indictment talks about the South Atlantic Regional Center LLC, a U.S. Citizenship and Immigration Service-authorized EB-5 conduit in the EB-5 program. Palm House investors’ money was put into its accounts and transferred into Robert Matthews’ accounts.

The Palm House Hotel is poised for a new chapter after London-based hotel company London + Regional Properties bought the property for $40.6 million during bankruptcy proceedings.