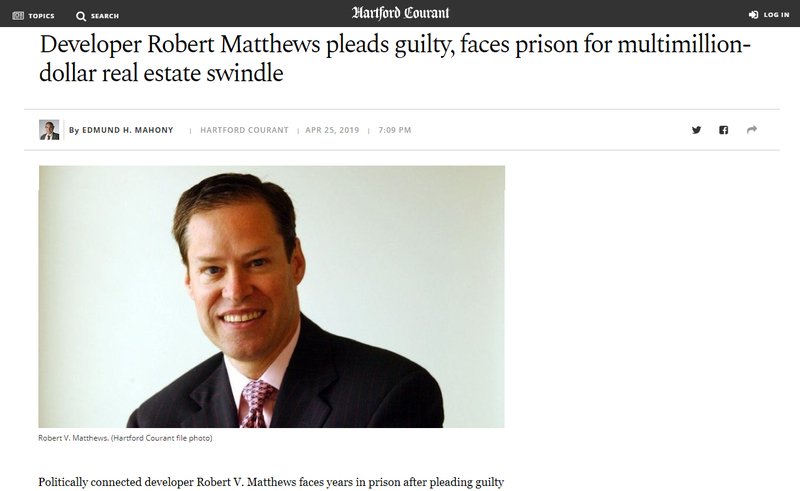 The bilked investors claimed in a related lawsuit that Matthews, 61, of Palm Beach, used their money for, among other things, a down payment on a 151-foot yacht.

In the scheme targeted by the indictment, Matthews and the others proposed developing a property known as The Palm House Hotel, a property of which Matthews has been the on-again, off-again owner for years.

The indictment charged that Matthews and the others used a federal visa program known as the EB-5 program to lure foreign investment to The Palm House. Under the program, foreign nationals can obtain U.S. residency visas by making substantial investments in qualified U.S. development projects that create jobs. About 60 investors from China and Iran made threshold investments of $500,000.

Matthews’ real estate career — in Connecticut, Florida and on Nantucket — has danced around the edges of law enforcement for years, but Matthews always wriggled away. He first caught the attention of federal authorities in the late 1980s, through the corruption cases that imprisoned former Waterbury Mayor Joseph Santopietro and a half dozen political allies. Years later, when former Gov. John G. Rowland was trying to sell a Washington, D.C., condominium, Matthews arranged its purchase at a substantial markup. When Rowland was governor, he was accused of intervening with state development officials on Matthews’ behalf.

Matthews bought the Palm Beach property in 2006, lost it to foreclosure three years later and — according to the indictment — reacquired it in 2013 through a limited liability corporation. His brother is listed as a 99 percent owner of the corporation. In reality, according to the indictment, Matthews controlled the property, which is in foreclosure again.

Matthews and the others made a variety of wildly attractive, but ultimately empty promises to recruit investors, according to the indictment and the investor lawsuit that tracks the criminal case. The suit alleges that Matthews described himself as one of the country’s top real estate developers and that “Donald Trump and Bill Clinton would serve on the Palm House Hotel advisory board and play a key role in recruiting celebrities and dignitaries such as Tony Bennett, Celine Dion, Bill Koch and Eric Schmidt to the club."

The suit says Matthews and others took Chinese investors’ representatives to a charity event at President Donald Trump’s Mar-a-Lago resort in Palm Beach — before the President was elected — and “arranged for them to take pictures with Trump in an effort to further create the facade that Robert Matthews was an important, wealthy, and trustworthy member of American society and on par with Donald Trump.”

The investors claim in their suit that they lost their money, never received visas, that no work was done on the hotel, there were no celebrities associated with the project and that Matthews and the others spent millions on themselves.

Federal authorities said Matthews is being prosecuted in Connecticut for a Florida swindle because he and others moved investor funds through Connecticut bank accounts and used the money to pay his and his wife’s credit card bills and purchase two properties located in Washington Depot — one of which Matthews had previously lost to foreclosure. Matthews and Laudano are accused of conspiring the conceal the relationship between the parties to the Washington Depot purchase, as well as the source of he funds.

The U.S. Attorney’s office said Matthews and his wife evaded payment of income taxes for the 2005 and 2007 calendar years by using limited liability companies, a company bank account and their attorney’s trust account to pay for personal expenses.

Federal authorities also accused Matthews of conspiracy in a scheme to defraud TD Bank in connection with the development of the Point Breeze Hotel in Nantucket.