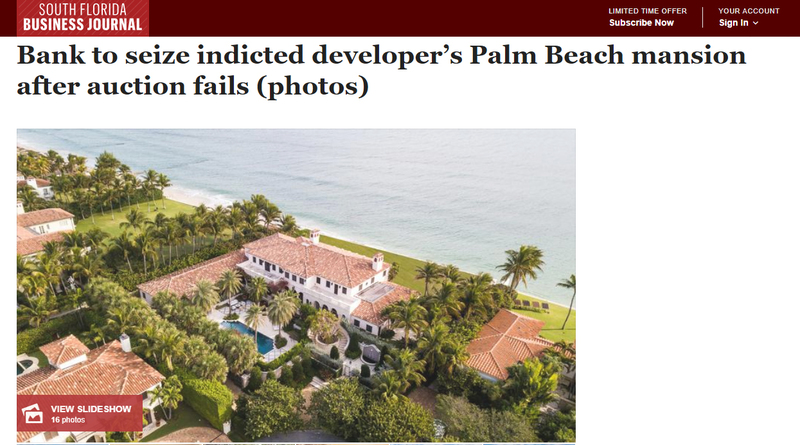 The oceanfront mansion of developer Robert V. Matthews, who was indicted by a federal grand jury in 2018, will be taken by a mortgage lender after a bankruptcy auction came up empty.

The nearly 16,000-square-foot home, at 101 Casa Bendita in Palm Beach, was scheduled for auction March 28 under order of U.S. Bankruptcy Court in Matthews’ personal Chapter 11 filing. The minimum bid was $31 million.

In an April 8 order, U.S. Bankruptcy Judge Mindy A. Mora said no qualified bids were received for the home by the deadline. She approved issuing the deed for the home to DB Private Wealth Mortgage, which holds a $27.4 million loan on it.

The lender agreed to reimburse $30,000 toward the broker’s marketing campaign expenses, $15,000 toward attorneys fees and closing agents expenses, and $100,000 for administrative fees.

Matthews was ordered to vacate the home within 15 days.

In 2018, Matthews was indicted for fraud in federal court in Connecticut for allegedly defrauding EB-5 investors in the Palm House hotel project by siphoning their funds for his personal use, instead of for the hotel development in Palm Beach. Tax evasion charges were later added to the indictment. Matthews has pleaded not guilty, and the case remains pending.

The Palm House hotel project will be sold out of bankruptcy for $39.6 million.