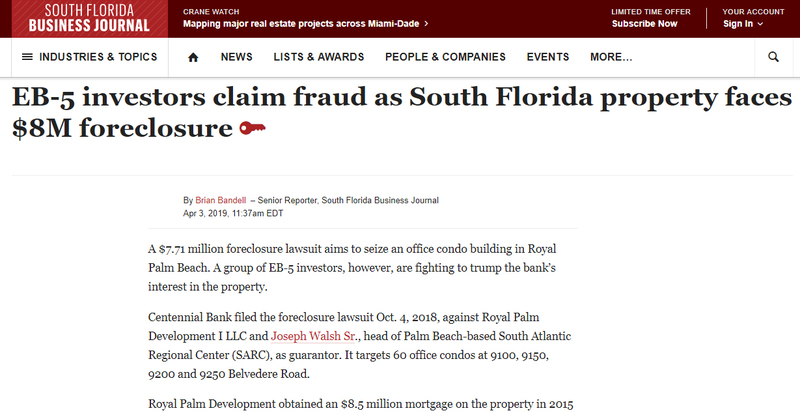 A $7.71 million foreclosure lawsuit aims to seize an office condo building in Royal Palm Beach. A group of EB-5 investors, however, are fighting to trump the bank’s interest in the property.

Royal Palm Development obtained an $8.5 million mortgage on the property in 2015 from Stonegate Bank, which was later acquired by Centennial Bank. The lawsuit says the borrower missed payments starting in March 2018, and owes $7.71 million in principal, plus interest.

Walsh has raised EB-5 funds for numerous projects. He and SARC are currently among the defendants in a civil fraud lawsuit by the Securities and Exchange Commission over the Palm House Hotel, an EB-5 project in Palm Beach that stalled amid allegations that investor funds were misused.

Fort Lauderdale attorney Galen J. Criscione previously represented Walsh in both the SEC case and the Royal Palm Beach litigation. Criscione withdrew from both cases in January. Walsh, who filed a motion in December denying the SEC's allegations, has not retained another attorney. An attempt to reach Criscione for comment was not returned.

On March 14, a motion to intervene in the foreclosure lawsuit was filed by Miami attorney Kenneth Dante Murena on behalf of the property's 12 EB-5 investors. They invested through a partnership called Royal Palm Town Center IV, and are seeking permission to obtain an equitable lien on the property – jumping ahead of the bank in priority to be repaid – and to file a complaint against Royal Palm Development.

The motion to intervene says Walsh "defrauded" the EB-5 investors by failing to grant them a first priority lien on the property and by “misappropriating” millions of dollars of their funds that should have been spent on the project.

The EB-5 program takes investors of $500,000 each to create at least 10 jobs in the U.S. in exchange for a green card. However, if those jobs don’t come to fruition, the government can deny the residency petition. If the investors who used the EB-5 program to fund this project can't prevent seizure of the property by the bank, they could be deported.

The government determined that the jobs in Royal Palm Beach were not created and denied their green card petitions, which could force the investors to leave the country, the motion says.

“It would be inherently unfair and inequitable for the defrauded investor plaintiffs to lose their funds and all interest in the property … and face deportation, rather than the partnership receiving a first-priority lien on the property,” the EB-5 investor motion to intervene stated.

Murena said Walsh and SARC raised $25 million from 50 EB-5 investors for the Royal Palm Beach project, although most of them are not part of his lawsuit. Murena said the funds were supposed to be used to acquire and renovate the office condos so they could be leased out.

According to Murena's motion, Walsh directed $9 million of EB-5 investor money to Connect Insurance Group to renovate its space before moving into the building. That company, which was controlled by Walsh's wife, later vacated the building before completing renovations.

Murena said he’s not sure what happened to the balance of the EB-5 investors’ money. The office condos are about one-third occupied, he said.

In September 2018, Murena’s 12 EB-5 clients filed a fraud and breach of fiduciary duty lawsuit in federal court in Miami against Walsh, SARC and Royal Palm Development. The lawsuit claims the investors were misled about the Royal Palm Beach project, and their funds were misappropriated.

Walsh has yet to respond to the fraud lawsuit from the EB-5 investors, who recently filed a motion to hold the defendants in default.