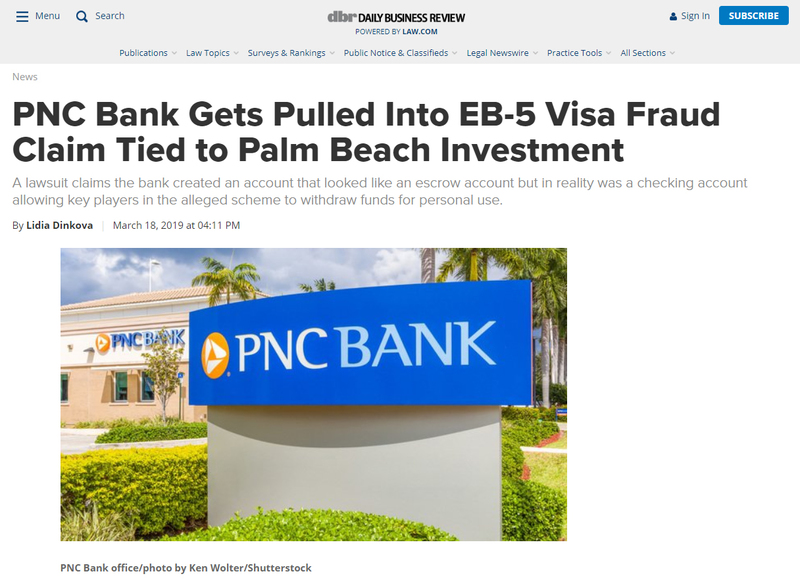 A lawsuit claims the bank created an account that looked like an escrow account but in reality was a checking account allowing key players in the alleged scheme to withdraw funds for personal use.

PNC Bank and a Boynton Beach vice president are the latest to be pulled into litigation alleging EB-5 investment fraud on an unfinished Palm Beach project.

The Pittsburgh-based bank eased withdrawals for the developer that solicited the investments for the Palm House Hotel at 160 Royal Palm Way, a Palm Beach Circuit Court lawsuit claims. The project was envisioned as a 79-unit hotel-condominium financed with help from EB-5 visa investors.

The building was sold March 8 in bankruptcy proceedings for $40.6 million, but an appeal is planned by an affiliate of Wellington developer Glenn Straub, a previous owner.

A lawsuit filed March 1 claims a PNC account received deposits from the foreign investors, but what was billed as an escrow account actually was a checking account allowing developer Robert Matthews and Joseph Walsh Sr., founder of the South Atlantic Regional Center LLC, to ”cut through the obstacles and red tape” and makes withdrawals.

All of the investors’ money was taken, and they didn’t receive conditional residency under the EB-5 program, said George, managing shareholder at George Gesten McDonald in Lake Worth.

Attempts to reach Ramirez at the PNC branch and other numbers were unsuccessful by deadline.

Money initially went into a SunTrust Bank escrow account. The complaint said a South Atlantic Regional Center executive and Ramirez already had a banking relationship. Ramirez and another PNC representative initially said the bank’s escrow account would run just like SunTrust’s, which would make withdrawals difficult.

“Walsh was extremely disappointed and unhappy at this news because such requirements would limit his ability to gain unrestricted access to the EB-5 investors’ investment monies,” the complaint said.

PNC knew what it was doing because it had experience with other EB-5 projects, according to the complaint. The Palm House Hotel investors weren’t warned, and the withdrawals were processed.

Before the 2016 presidential election, investors were told Donald Trump and Bill Clinton would serve on the Palm House Hotel advisory board, and the likes of Celine Dion, Tony Bennett and Bill Koch were hotel club members.

Emails to Walsh and SARC weren’t returned by deadline. Wiggin and Dana partner David Ring in Washington, Matthews’ attorney in a separate but related case, declined to comment.