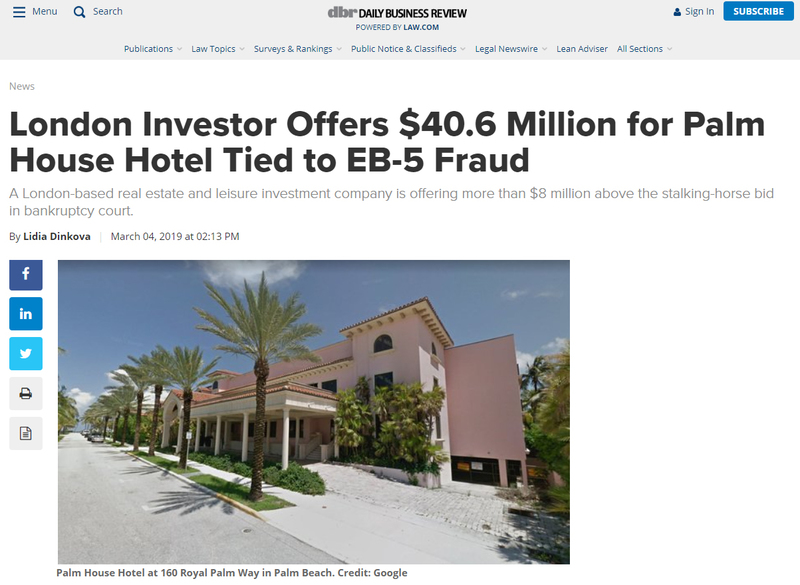 A London-based real estate and leisure investment company is offering more than $8 million above the stalking-horse bid in bankruptcy court.

An unfinished Palm Beach hotel-condominium, which is tied to EB-5 investment visa fraud allegations, might get a new owner by week’s end after a London investor’s $40.6 million purchase proposal gained ground in bankruptcy court.

The Palm House Hotel, once envisioned as a 79-unit resort but now seen as a blight in the mansion-studded resort town, had been slated for an auction.

The sale isn’t final because a competing buyer, New York-based developer and fund manager Related Cos. LP. through affiliate RREF II Palm House LLC, was the $32 million stalking-horse bidder and still has a chance to beat the offer. Objections also could be filed.

Kimball will hold a hearing at 10 a.m. Friday to decide whether Related or London + Regional won the bidding and consider any objections before choosing the buyer.

The Palm House Hotel is at the center of allegations that it was used in an EB-5 investment visa fraud scheme. The federal program paves a path for foreigners to obtain green cards in exchange for putting at least $500,000 into a U.S. commercial enterprise that creates at least 10 jobs.

A grand jury indictment, a Securities and Exchange Commission complaint and a civil suit alleged foreigners were induced into putting their funds into the development of the 82,648-square-foot property at 160 Royal Palm Way when some of the money was diverted for personal uses.

A bankruptcy auction originally set for Nov. 16 has been repeatedly delayed.

A creditor, KK-PB Financial LLC, has argued it has a $39 million secured interest in the property. KK-PB Financial, managed by Wellington developer Glenn Straub, cites a $27.5 million mortgage issued in 2013.

Straub bought the property at auction for $10 million in 2009, then sold his membership interest in the controlling LLC in 2013.

KK-PB Financial argued 160 Royal Palm defaulted on the mortgage and wanted to credit bid in the auction, but Kimball rejected that idea.

“It’s one round of a 12-round match. I am not going to tell you my attorney-client privileged information on what we are going to do,” Straub told the Daily Business Review on Sunday.

KK-PB Financial attorney Luis Salazar of Salazar Law in Coral Gables filed a motion Thursday to withdraw as its attorney, and Kimball approved it Friday.

An apportionment of sale proceeds to EB-5 investors and other creditors won’t be determined until after the sale closes, said Philip Landau, a Boca Raton attorney who represents 160 Royal Palm and filed the bankruptcy petition.

The proposed sale to London + Regional is good news for the EB-5 investors and the town of Palm Beach, said Landau, a founding partner of Shraiberg, Landau & Page.

The affluent community “can look forward to seeing what was an eyesore finally in the near future being completed,” he said. “We are also ecstatic for the EB-5 investors, who will see a significant recovery on the amounts of their claims.”

Palm Beach asserted a $4 million claim for code enforcement fines. The town settled for $250,000, agreeing to the much lower payout to keep the property from languishing, Landau said. London + Regional agreed to reimburse the estate if its purchase closes.

The London investor’s offer breaks down to $39.6 million in cash, up to $450,000 in real estate brokerage commissions, $250,000 for the town settlement and a $350,000 breakup fee to stalking-horse bidder Related Cos., and any unpaid property taxes for this year and last, according to Landau’s motion seeking approval of the private sale.

Exactly how London + Regional, which also has offices in Ireland and Panama, would develop the Palm House Hotel remains unknown. Its attorney, Akerman partner Eyal Berger in Fort Lauderdale, declined to comment.

Its properties include the London Hilton on Park Lane, the Fairmont Monte Carlo in Monaco, and resorts Club Med Turkoise in the Turks and Caicos Islands and the Fairmont Royal Pavilion in Barbados, according to its website.