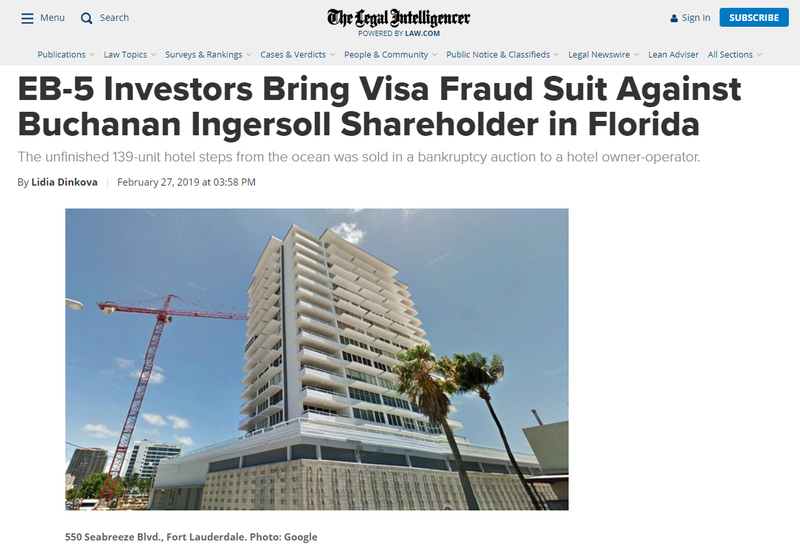 The unfinished 139-unit hotel steps from the ocean was sold in a bankruptcy auction to a hotel owner-operator.

Foreign investors who claim they were duped into putting $12 million into a Fort Lauderdale hotel project in exchange for green cards again are suing to reclaim their funds, this time in state court with a Buchanan, Ingersoll & Rooney shareholder as a defendant.

The EB-5 investment visa fraud case centers on the Las Olas Ocean Resort, which was planned as a 139-unit resort steps from the ocean at 550 Seabreeze Blvd. It wasn’t finished on time and has been mired in litigation, including an alleged loan default, bankruptcy proceedings and the visa fraud accusation.

The property is poised for a fresh start with Magna Hospitality Group. The Warwick, Rhode Island-based owner and operator of 20 hotels bought the property for $39.1 million in a stalking-horse bankruptcy auction last August.

The investors have been fighting in bankruptcy court for some of the sale proceeds, but things don’t look bright for them there, their attorney said.

“It doesn’t appear that there’s going to be a big distribution to unsecured creditors, but we are taking a wait-and-see attitude,” said Thomas Lehman, a founding partner at Levine Kellogg Lehman Schneider + Grossman in Miami. He noted other unsecured creditors have pending claims.

“It looks like one slice of bread to be divided among many hungry people,” Lehman said.

One Russian and 23 Chinese investors on Feb. 7 sued in Miami-Dade Circuit Court alleging the limited liability company that collected $500,000 from each of them was part of a scheme with the construction lender and several people.

Marketing materials and two letters from the Delaware-based construction lender, The Bancorp Bank, promised an incurable financial default would generate one unit in the hotel for each investor.

In its letters, Bancorp said it would release its hold on 60 rooms, one for each investor who put in a combined $30 million, according to the complaint. Alternatively, the lenders were promised a full refund.

But the 24 investors who filed suit say these promises weren’t in the loan agreement, which set nine conditions for getting the rooms in case of a default. The lawsuit said one condition was completion of the project.

The project developer is 550 Seabreeze Development LLC, which isn’t named in the lawsuit.

Defendants in the state case include Jack Kessler, Eugene Kessler and Ken Bernstein, alleged principals in the development company. They allegedly created companies that aided the EB-5 scheme.

Berger Singerman partner Paul Steven Singerman in Miami, who represents the Kesslers and Bernstein in the bankruptcy case, didn’t return a request for comment by deadline.

The original lawsuit filed by 21 investors in the federal bankruptcy case was dismissed Dec. 27 by U.S. Bankruptcy Judge Raymond Ray in Fort Lauderdale.

Three other investors joined the state case, which mirrors the dismissed federal one, as plaintiffs, bringing the amount they collectively invested from $10.5 million to $12 million.