Staybridge Suites hotel in Lafayette to be auctioned by court order 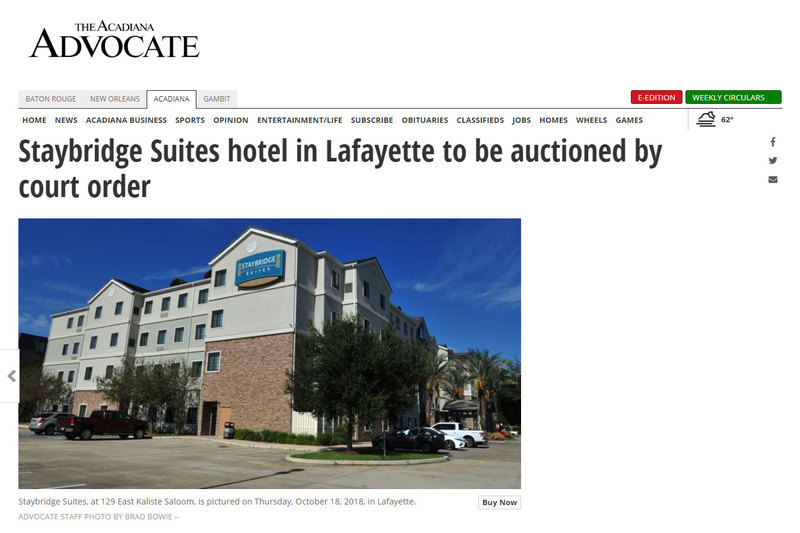 Staybridge Suites, at 129 East Kaliste Saloom, is pictured on Thursday, October 18, 2018, in Lafayette.

The Staybridge Suites hotel on Kaliste Saloom Road is going up for auction by court order after the owners failed to make payments on a multimillion-dollar mortgage.

The owners, Lafayette attorneys Rickey Miniex and Clyde Simien, started construction on a 220-unit multifamily housing complex as the hotel mortgage went into default, according to public records.

Miniex and Simien owe $15 million to a mortgage securities corporation through their business entity, The O’Brien Group SPE LLC, according to a petition filed by U.S. Bank on behalf of the note holder. About 95 percent of the $13,900,000 principal amount remains outstanding, and the total amount due includes interest, late fees and a pre-payment premium.

Miniex and Simien did not respond to requests for comment left with a secretary on Thursday afternoon.

The hotel loan originated in October 2014, about one year before Miniex and Simien inked a $27 million construction contract for 250,000-square-foot apartment complex in south Lafayette. The partners secured another mortgage with BancorpSouth at the same time they signed the construction contract. The BancorpSouth mortgage document limits indebtedness to $50 million without specifying a principal amount.

The apartment complex, called La Veranda at Polly Lane, was completed last year, and its website is marketing one-, two- and three-bedroom apartments. The contractor, ICI Construction Inc., filed a $1.3 million lien on the property in April. An ICI Construction executive did not return a call for comment.

The U.S. Bank petition on the hotel loan does not specify the terms of repayment or the interest rate. A writ of seizure and sale was filed in 15th Judicial District Court on Oct. 5.

Miniex and Simien initially financed construction of the Staybridge Suites in 2008 with a $9.3 million G.E. Capital Financing loan, which the partners paid off around the same time they closed on the loan now in default.

The three-acre plot on which the hotel rests — acquired by Miniex and Simien in 2007 for $1 million — is near the busy intersection of Kaliste Saloom Road and Pinhook Road, where there are at least half a dozen major-flag hotels close to Lafayette Regional Airport.