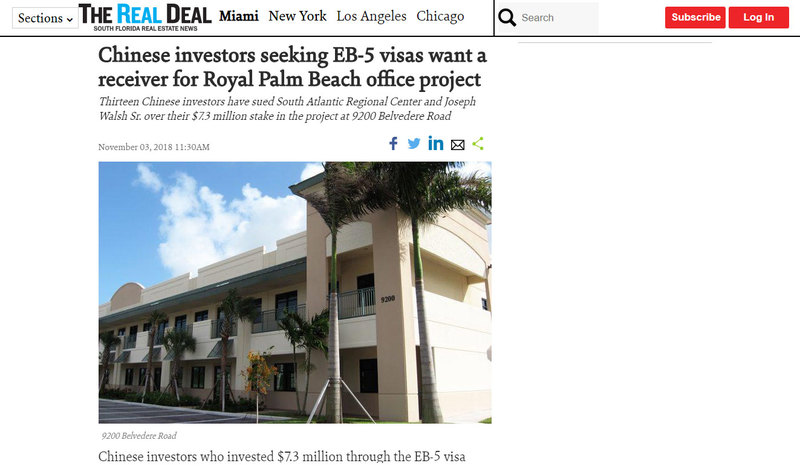 Thirteen Chinese investors have sued South Atlantic Regional Center and Joseph Walsh Sr. over their $7.3 million stake in the project at 9200 Belvedere Road.

Chinese investors who invested $7.3 million through the EB-5 visa program in an office development in Royal Palm Beach want a court-appointed receiver to complete the development.

The 13 investors claim the Royal Palm Beach project was a fraudulent scheme to raise capital through the EB-5 program, which grants permanent residency in the United States to investors who put $500,000 or more into a U.S. commercial venture that creates at least 10 jobs.

They thought they were financing the acquisition and development of Royal Palm Business Plaza, an office property at 9200 Belvedere Road in Royal Palm Beach.

But the investors have filed a lawsuit against South Atlantic Regional Center LLC, a federally authorized entity in Royal Palm Beach that links foreign nationals with EB-5 investment opportunities in the United States.

The federal lawsuit alleges that the founder of South Atlantic Regional Center, Joseph Walsh Sr., promised the investors that their investments would be treated as loans secured by a mortgage on the office property.

In a motion for the appointment of a receiver to take over the office project, the Chinese investors claimed that Walsh failed to secure a mortgage on Royal Palm Business Plaza on behalf of the Chinese investors and instead obtained bank loans secured by the property and its rental income.

According to the motion, a defendant called Royal Palm Development I LLC defaulted on an $8.8 million bank loan secured by  the office property. Property records show that the limited liability company is the owner of the office property, and state records list Walsh as the company’s managing member.

The default triggered efforts by the bank to seize the Royal Palm Beach property, according to the motion.

Neither Walsh nor South Atlantic Regional Center returned a phone call and email from the Daily Business Review.

The attorney for the plaintiffs, Kenneth Murena, told the Daily Business Review in an email that “the only way to complete it [the office project] so that the investors may obtain permanent residency is for a receiver to take over, collect rent from existing tenants, complete the build-out and lease out the empty units.”

Unless a court-appointed receiver takes over the office project, Murena wrote in the email, “the investors will likely lose not only their investments but also their U.S. residency, and they may be required to leave the country.”

Walsh and South Atlantic Regional Center also are defendants along with Palm Beach developer Robert Matthews in a lawsuit filed by the U.S. Securities and Exchange Commission alleging they defrauded EB-5 investors in a failed condo-hotel development in Palm Beach called Palm House.