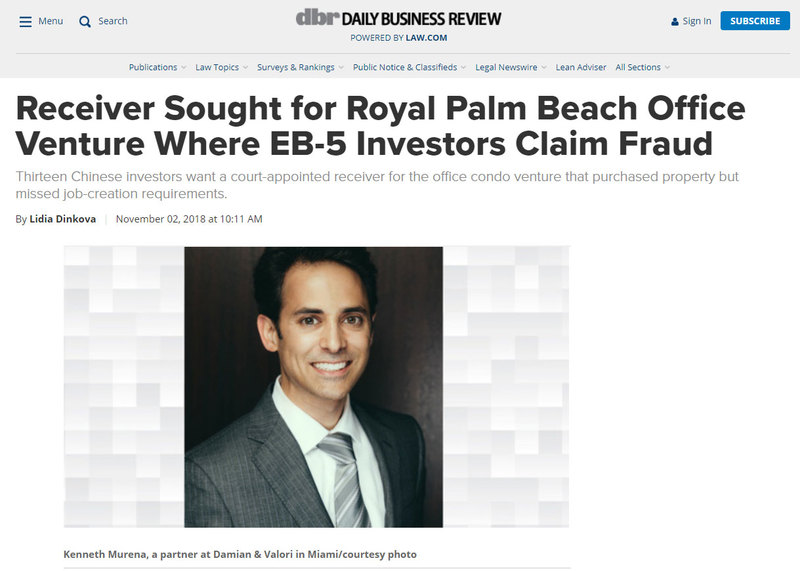 Kenneth Murena, a partner at Damian & Valori in Miami

Chinese investors who say they were defrauded out of $7.3 million in EB-5 visa money injected into a Royal Palm Beach office venture now fear losing their U.S. residency as a result.

The 13 investors, who put in funds under the federal immigration program that grants green cards in exchange for a financial boost of at least $500,000 to a U.S. commercial venture, are asking for a court-appointed receiver to complete the project in line with EB-5 guidelines.

The investors say they were induced to put in the minimum amount plus a $60,000 administrative fee for the purchase and development of 60 commercial units at Royal Palm Business Plaza at 9200 Belvedere Road.

They said they were promised a tenant had been lined up and agreed to a 10-year lease, creating at least the minimum 10 jobs required under the EB-5 program for visas.

The investors on Sept. 20 sued Royal Palm Beach-based South Atlantic Regional Center LLC, a federally authorized center that connects EB-5 investors with opportunities in the U.S., and its founder, Joseph Walsh Sr., who is accused of orchestrating the scheme.

Not only did Walsh promise Connect Insurance Group Inc. would occupy the office and create jobs, he also said investors’ loans would be secured by a mortgage on the property in their favor, according to the federal complaint.

The motion for a receiver filed Oct. 26 said Walsh didn’t secure the mortgage for them and instead took out bank loans using the office property and rent as collateral. One of the defendants, Royal Palm Development I LLC, defaulted on a $8.8 million loan, according to the motion. Royal Palm Development I LLC is listed as the office units’ owner in Palm Beach County property records and lists Walsh as its managing member in state corporate records.

The default prompted the bank to try to collect rent from tenants and threaten to seize the property, according to the motion.

This means the office condominiums bought with investors’ money are in “immediate danger of significant loss, not only to Mr. Walsh and his fraudulent scheme,” but also to the bank, plaintiffs attorney Kenneth Murena argued in the emergency motion for a receiver. Murena is a partner at a Damian & Valori in Miami.

The motion for a receiver seeks a preliminary injunction to prohibit Walsh, South Atlantic, Royal Palm Development and affiliates from taking any further action on behalf of the partnership, Royal Palm Town Center IV LLLP, which accepted investor funds in exchange for an interest in the limited partnership and the office property.

Investors claim Walsh misrepresented the project to the investors to give it an air of credibility. It’s also alleged Connect Insurance temporarily rented space at Royal Palm Business Plaza but left before its lease expired and took some of the investors’ money with it.

The motion said Murena has drawn a connection between Connect Insurance and Walsh, saying the corporation was acquired by a woman who is either Walsh’s current or ex-wife.

Under the EB-5 visa investment program, investors go through two rounds of approval to obtain green cards. In this case, the investors passed the first round to get conditional green cards, but the government denied their round-two petitions for not meeting the job creation threshold, according to the complaint.

“Given the total lack of progress and misappropriation of investor funds at the project, the only way to complete it so that the investors may obtain permanent residency is for a receiver to take over, collect rent from existing tenants, complete the build-out and lease out the empty units,” Murena said by email. “Otherwise, the investors will likely lose not only their investments but also, their U.S. residency, and they may be required to leave the country.”

Two more investors, one from China and one from Vietnam, have retained Murena in the case and will be added to the complaint, increasing the total amount of money put up by litigating investors to $8.4 million.