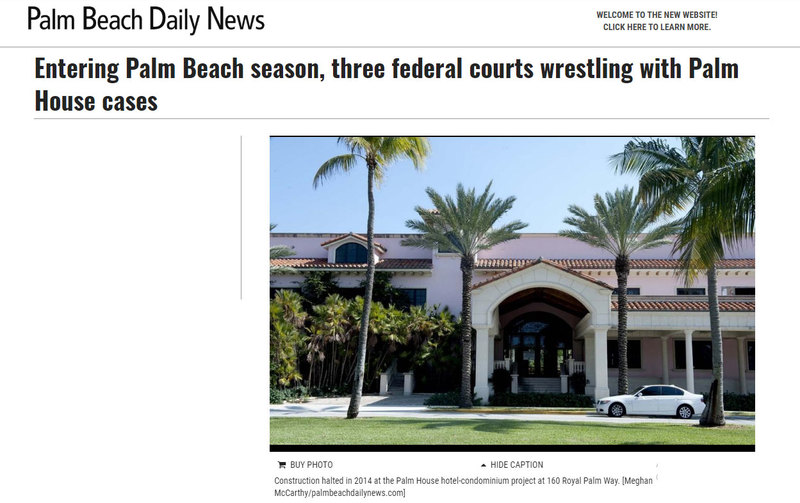 The Palm House hotel-condominium project has for four years stood unfinished and padlocked in the ocean block of Royal Poinciana Way in Palm Beach. But behind the scenes, three federal courts lately have been overseeing proceedings related to the project.

Those include a pending criminal trial of its developer, Palm Beacher Robert V. Matthews, along with his wife and a Palm Beach real estate attorney.

In one of the cases, a separate securities-fraud investigation led the Securities and Exchange Commission to bring civil charges against the Matthews, a Royal Palm Beach businessman and two of the latter’s companies.

Here’s a recap of what to expect this season regarding the Palm House and its players.

* Already postponed twice, jury selection is scheduled to begin Nov. 5 in U.S. district court in Bridgeport, Conn., for the criminal trial of Matthews; his wife, Mia Matthews; and attorney Leslie R. Evans. But in an Oct. 4 filing, Evans asked the court to delay the trial to June.

Arrested at their Palm Beach homes in March, Robert Matthews and Evans are facing multiple charges of felony bank and wire fraud and money laundering. U.S. prosecutors in Connecticut say the two men participated in a scheme to bilk foreign investors out of money — related to the federal EB-5 program — intended to fund the construction of the Palm House project.

In addition, Robert and Mia Matthews were charged in September with one felony count each of tax evasion in the same case.

The Matthewses and Evans have pleaded not guilty to all charges, and all three are free on bond. Two other men have accepted plea agreements in the criminal case and are scheduled to be sentenced in September 2019.They are Matthews’ brother, Gerry Matthews, a Connecticut real estate broker; and Boynton Beach construction executive Nicholas Laudano, who also has ties to Connecticut.

As of Friday, U.S. Judge Victor A. Bolden had not ruled on Evans’ request to adopt a new trial schedule. Under the schedule submitted by Evans’ Connecticut attorneys, Daniel E. Wenner and Stanley A. Twardy Jr., pretrial motions would begin Nov. 30 with the case culminating in jury section on June 17 and a trial beginning June 10.

Twardy said Friday his team had been in discussion with prosecutors to come up with a “realistic schedule” for the complex case to accommodate the needs of all parties involved.

* A U.S. bankruptcy court in West Palm Beach has set Nov. 16 as the date for an auction of the Palm House property, 160 Royal Palm Way, so that it can be sold without liens or other legal encumbrances.

An entity controlled by The Related Companies has signed a so-called “stalking-horse” contract to buy the property for a guaranteed minimum of $32 million. Bidding will begin at $32.5 million, and Nov. 9 is the deadline for qualified bidders to register for the auction.

Proceeds will be used to help pay creditors involved in the Palm House. Court filings in the Chapter 11 corporate bankruptcy case show the Palm House’s ownership company owes about $115 million to creditors.

In July, a Palm Beach County circuit court judge expanded the role of former Palm House receiver Cary Glickstein, a former Delray Beach mayor. As the sole manager of the Palm House’s ownership company, Glickstein ushered the project into bankruptcy court with the intent on selling the property at auction.

This month, the Palm Beach Town Council paved the way for the sale by agreeing to a $200,000 settlement to end a lawsuit over construction delays with the Palm House’s ownership company. The lawsuit settlement wiped out more than $2 million in fines that had accrued between February 2013 and December 2016. The Code Enforcement Board accepted a $50,000 settlement offer over code violations on Thursday.

*As in the criminal case, the SEC charges hinge on the way millions of dollars in EB-5 money earmarked for the Palm House project was collected and spent. In an Oct. 4 filing, Robert Matthews, representing himself, denied the charges in U.S. District Court for the Southern District of Florida.

His co-defendants in the SEC case are Royal Palm Beach resident Joseph J. Walsh Sr. and two of Walsh’s firms, which were involved with the investors’ EB-5 money. The program expedites so-called “green cards” for foreigners who qualify and invest in construction projects that create U.S. jobs.