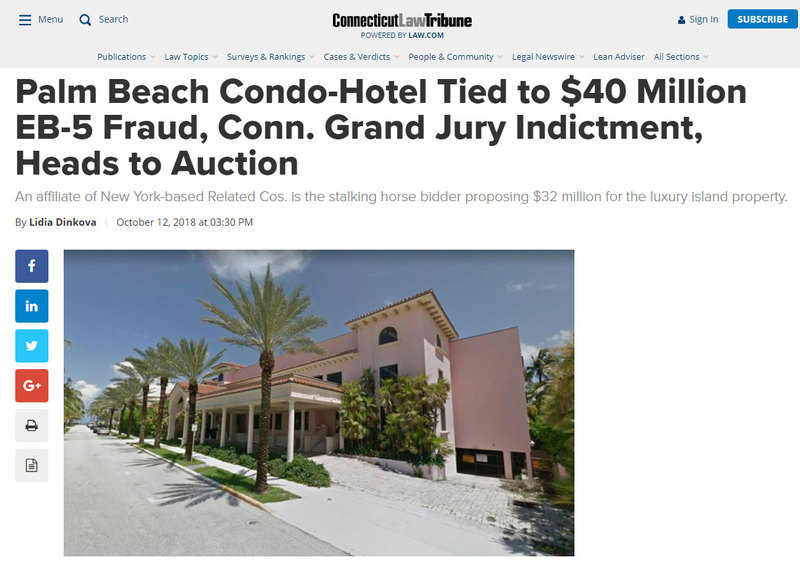 The unfinished Palm House Hotel in Palm Beach, Florida, which backers say is the main attraction in a $40 million EB-5 visa fraud and is tied to a Connecticut grand jury indictment,, is set for auction Nov. 16.

The deadline to submit bids for the condo-hotel at 160 Royal Palm Way is 5 p.m. Nov. 9. The property on one of the main retail strips on the tony island is a five-minute ride from President Donald Trump’s Mar-a-Lago club.

The 54,038-square-foot salmon-colored building constructed in 1961 on 1.4 acres is named in an Aug. 3 Securities and Exchange Commission complaint, an Aug. 29 indictment by a Connecticut grand jury and a lawsuit by Chinese, Iranian and Turkish investors alleging fraud under the EB-5 program that provides a path to legal U.S. residency in exchange for a job-creating investment.

In the realm of whoppers, a key figure took future investors to the property, which was staged as a construction site with actors pretending to be crews; introduced them to Trump at a Mar-a-Lago charity event; and told them Bill Clinton, Celine Dion and Bill Koch would sit on the project advisory board, according to an amended complaint by investors. None of them have gotten green cards.

Investors say their money was siphoned off for personal use, including real estate purchases and a 151-foot yacht.

At least $22.6 million was diverted, including $8 million by Walsh to cover personal expenses, $5.5 to save Matthews’ Palm Beach mansion from foreclosure, $3.4 million for his yacht and $4.5 million to get his Connecticut home out of foreclosure, according to the complaint.

Matthews denied the allegations in an Oct. 3 filing.

Walsh and the South Atlantic center didn’t return requests for comment by deadline. An Aug. 28 filing requested a 60-day extension, saying he was attending to family matters abroad.

The South Atlantic center isn’t a defendant. Instead, it’s said to have been, along with the investors, on the receiving end of misrepresentations, including a report that notable entertainers and politicians would be on the Palm House Hotel advisory board, the indictment said. The South Atlantic center put investment funds into the accounts of Matthews and Evans.

The Matthewses and Evans have pleaded not guilty and are free on bond.

Evans’ attorney in the criminal case, Daniel Wenner, also denied the allegations. Evans “disputes the allegations and looks forward to being vindicated at trial,” Wenner, a partner at Day Pitney in Hartford, Connecticut, said in an email.

Separately, 63 investors sued, saying their money was used for cars, vacations, a pizza parlor and “accoutrements of a life of luxury.” They originally filed Nov. 24, 2016, amended their complaint Aug. 30, 2017, and recently sought permission to file a 29-count amended complaint.

“Will try the case and defend it, and we believe its a defensible case,” Elder of the Law Offices of Gregory R. Elder in Fort Lauderdale said Friday.

The Matthewses have denied the claims against them and in court filings pushed any blame on the South Atlantic center and Walsh. The center also has denied the allegations, pointing to other representatives used by investors for their EB-5 investments, according to court filings.

The property has changed hands several times. In October 2009, developer Glenn Straub bought it for $10 million from Matthews and sold it back to him by selling his ownership interest to Matthews’ Palm House LLC.

Straub’s KK-PB Financial LLC asserts it’s a priority lienholder with a $27 million mortgage and objected to bid procedures proposed by Landau. The founding partner of Shraiberg, Landau & Page has asked Kimball to bar a credit bid by KK-PB using its mortgage claim.

The property owner, 160 Royal Palm, was named as a defendant in the investors’ lawsuit and a relief defendant in the SEC complaint. Both are subject to an automatic bankruptcy litigation stay.