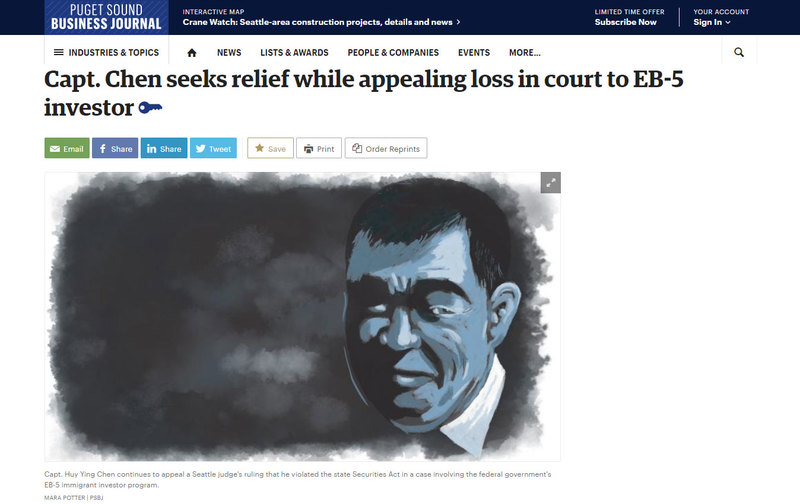 Chen's case was one of two EB-5 cases that drew scrutiny in Seattle last year. The other involved Lobsang Dargey, who was sentenced to four years in prison.

More than a year after a King County judge ruled that Huy Ying Chen violated the Washington state Securities Act, he continues fighting an order to pay an investor more than $225,600 in interest and legal costs.

Last spring, the Puget Sound Business Journal published the results of a months-long investigation into Chen, who proposed a $202 million international shipping terminal at the Port of Longview. He planned an even bigger project in Oregon at the Port of Astoria.

Neither project has been built.

The developments were to be funded, in part, through the United States' EB-5 immigrant investor program that lets foreign investors buy their way into permanent residency by investing at least $1 million in economic development projects, or $500,000 if invested in high-unemployment areas.

One woman, Zhongyuan "Bonnie" Pan, invested $500,000 in the Longview project. She said she realized the proposal was nothing but talk and sued, winning a court order from a King County Superior Court judge in a civil lawsuit for Chen's Great Ocean Capital Holding to return her money.

Chen, who said he was a cargo ship captain, has not been convicted of a crime, and the company refunded her investment, but court records show that Chen has asked the Washington state Court of Appeals to overturn the ruling.

Last week, Chen did not respond to email and telephone inquiries. His attorney, Tuella Sykes of Seattle, on Tuesday said Chen's appeal is pending but declined to discuss the case.

In a motion filed on Dec. 26, Sykes asked the Superior Court to dismiss its order that Chen pay Pan's legal fees or stay it until Chen's appeal is settled. On Tuesday, the court denied the motion.

Chen can still solicit funds from foreign nationals willing to invest in his projects so they can gain permanent residency in the U.S. The Great Ocean website still promotes projects in Astoria and the "Port of Columbia River" — no location by that name exists — and the U.S. Citizenship and Immigration Services, which operates the EB-5 immigrant investor program, still lists Great Ocean as an active EB-5 regional center.

USCIS spokeswoman Patricia Ryan on Tuesday said if there is evidence that a regional center fails to submit required information or no longer promotes economic growth, the agency will issue "a notice of intent to terminate" a center's participation in the immigrant investor program.

USCIS will not provide "pre-decisional information" on whether a regional center is being considered for termination, Ryan added.

In a Seattle-area EB-5 case in criminal court, real estate developer Lobsang Dargey in August was sentenced to four years in federal prison for conspiring to commit wire fraud and concealing information from federal authorities.

The cases shine a light on the EB-5 program, which some domestic entrepreneurs turn to for money when they can't get financing from traditional lenders.

Nationwide, the program created more than 174,000 jobs, with $16.4 billion of total investments in 562 projects in 2012-13, according to the U.S. Department of Commerce. During the same period, 122 EB-5 investors put $61 million in three Washington state projects.

While most EB-5 projects are run in accordance with the rules, scandals have prompted lawmakers to review the program, which the federal government continues to extend but only for short periods.

As of Dec. 5, there were 876 approved regional centers nationally and 60 in Washington state, according to USCIS.