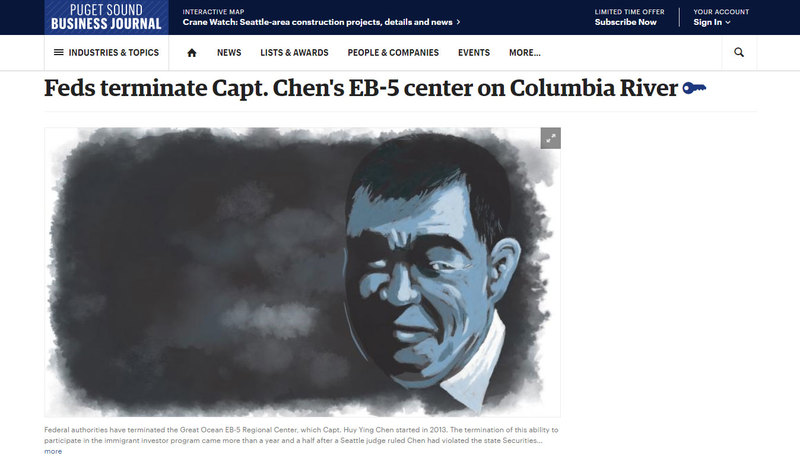 Federal authorities have terminated the Great Ocean EB-5 Regional Center, which Capt. Huy Ying Chen started in 2013. The termination of this ability to participate in the immigrant investor program came more than a year and a half after a Seattle judge ruled Chen had violated the state Securities Act by falsely telling an investor he had secured a long-term lease for the business with the Port of Longview.

For nearly two years after he was judged to have violated Washington state's Securities Act, federal authorities allowed Sammamish resident HY Chen to continue soliciting money from foreign nationals for what appear to have been phantom multi-million projects in Washington and Oregon.

Even though a Seattle judge ruled in the fall of 2016 that Chen had violated the state Securities Act, the Sammamish resident was allowed to continue soliciting large investments from foreign nationals hoping to gain permanent U.S. residency through the EB-5 Immigrant Investor Program.

But then, federal officials on July 30 terminated Chen's Great Ocean EB-5 Regional Center, a move that will prevent him from raising funds through the program.

The decision came four months after he started another company, Great Pacific Regional Center LLC, in Kenai, Alaska. The company's plan was to bottle glacial runoff for export to Asia, but the U.S. Citizenship and Immigration Services (USCIS) denied his application to form the regional center, Chen said.

He is appealing the decision.

The Puget Sound Business Journal last year published the results of a months-long investigation of Great Ocean, which had proposed a $202 million marine shipping terminal in Longview and a similar project with a major tourism component in Astoria, Oregon. While neither project has moved ahead, the Astoria project website still exists.

Chen allegedly convinced a Chinese national, Zhongyuan "Bonnie" Pan, to invest $500,000 in the project by telling her he had secured a long-term lease with the Longview port when he had not, according to documents Pan filed in a civil suit in King County Superior Court several years ago.

King County Superior Court Judge Suzanne Parisien ruled that Chen violated the Securities Act and ordered Great Ocean to repay Pan's investment, plus interest and administrative and legal fees. Pan received $519,500 but has not yet received the interest and legal fees that totaled $225,600 near the end of 2016.

Pan may not be the only person who invested in Great Ocean.

Ware said he has heard from two out-of-state attorneys who claimed to represent other Great Ocean investors. He declined to name them.

Citing the privacy of his business, Chen declined to say how many other people invested in Great Ocean.

USCIS spokesman Michael Bars on Wednesday issued a general statement about the termination, acknowledging the EB-5 program "has too often been prone to instances of fraud and abuse."

"As such, if a regional center fails to live up to the tenets of the program, or if cases of fraudulent activity are detected, USCIS will take the appropriate measures and may terminate a regional center designation if necessary."

The 66-year-old Chen, who said he was a captain for two Taiwan-based shipping companies, is appealing the termination.

Representing himself, he also is appealing the Superior Court ruling that he violated the Securities Act, arguing it's an immigration case and should be the purview of federal courts. A state Court of Appeals clerk said a three-judge panel examined the claim Sept. 28 but has not yet ruled.

Chen said if he loses he will appeal to the state and U.S. supreme courts.