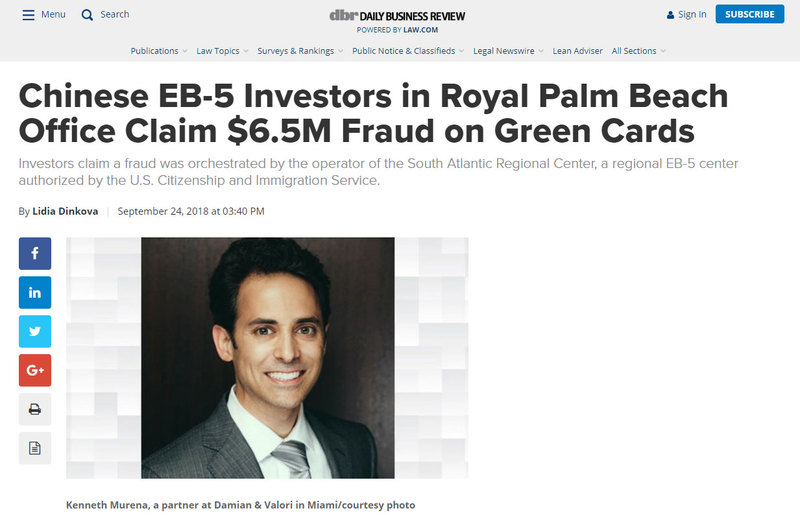 Chinese investors claim they were duped into sinking more than $6.5 million into a Royal Palm Beach office venture in exchange for EB-5 visas and have been denied permanent U.S. residency.

This is at least the third EB-5 fraud allegation since July involving South Florida real estate. The program gives foreigners green cards if they commit at least $500,000 to job-creating projects.

Instead, Walsh and numerous affiliated companies, including Connect Insurance, schemed to fleece the EB-5 investors, the complaint said. Connect rented space but left before the lease expired, never created the promised number of jobs and took $9 million, at least some of it believed to be investors’ money.

“Essentially, we are arguing that all of this together was one big fraudulent scheme orchestrated by Mr. Walsh,” said Kenneth Murena, a Damian & Valori partner in Miami who filed the lawsuit.

Walsh and South Atlantic didn’t return requests for comment. South Atlantic is a regional EB-5 center authorized by the U.S. Citizenship and Immigration Service, which administers the EB-5 program.

Connect Insurance is registered with the state Division of Corporations, but emails and calls to contacts listed in records weren’t answered.

This was a multitiered operation in which investors became limited partners of Royal Palm Town Center IV LLLP, and the company transferred funds to Royal Palm Development I LLC to buy the commercial space and lease it to Connect Insurance, according to the complaint.

Royal Palm Development bought numerous commercial lots in 2012 on the north end of the business plaza along Belvedere Road, according to the Palm Beach County property appraiser’s office.

The offices were built but needed some work to become tenant-ready, and the understanding was Connect Insurance would do the build-out in exchange for six rent-free months. Then, it would pay Royal Palm Development more than $1 million a year and had the option to buy the property after five years.

Instead, Royal Palm Development transferred more than $9 million to Connect Insurance, which didn’t complete the build-out or pay rent from June 2012 to August 2013, according to the complaint.

“The money is going in the wrong direction. CIG is leasing the units from RPD, and yet it received $9 million from RPD,” Murena said.

Investors, who said they also paid $60,000 each for administrative and legal fees, claimed other  misrepresentations: The Delray Beach-based Pugliese Co. developed Royal Palm Town Center, which was meant to “lend an air of legitimacy to the project”; Pugliese put $8 million into the project; the real estate was finished and free from debt; the investors’ funds were secured by first mortgages totaling $36.2 million; the space already was leased for 10 years; and the jobs were guaranteed; and it’s next to new USCIS offices — all of which turned out to be false.

Murena said there are no mortgages and investors’ remedies are limited.

“They can’t bring a foreclosure action to enforce the mortgage,” he said.

Walsh also used the property as collateral for $12.5 million in mortgages, according to the complaint.

U.S. Regional Economic Authority’s name was used in marketing materials, falsely indicating a link to the U.S. government, according to the complaint.

USREDA Holdings is based in Palm Beach and JJW Consultancy is a Hong Kong-based group that provided administrative and legal services to investors and passed along Walsh’s misrepresentations, according to the complaint.

“We have lots of money going into entities he controlled, including Royal Palm Development, which he controlled through USREDA. He is basically the sole individual behind all of these entities. He is the only one who could benefit from all the money that came from our client,” Murena said.

In state corporate records, Walsh is listed as the general partner in Royal Palm Town Center and the managing member of USREDA Holdings. The contact person for Connect Insurance and Royal Palm Development is manager Christina Hernandez, who also is USREDA’s controller.

Hernandez didn’t respond to a request for comment sent to an email address listed for her in state records.

The 13 Chinese plaintiffs were granted conditional permanent residency some time ago and already have moved to the U.S. Most are living in California, and the rest are in five other states. But the government this year denied them the second round of approval, the I-829 petitions that require proof of job creation. They have appealed the denial, Murena said.

“The investors did not know any of this was happening all these years. It wasn’t until their I-829 petitions were denied this year that they learned it,” he said. “Now someone needs to come in there and finish renovating these units so they can be leasable, marketable to potential tenants, and the investors can preserve their EB-5 status as a conditional permanent residence and eventually become permanent residents.”

Walsh also is a defendant in a U.S. Securities and Exchange Commission civil securities fraud complaint tied to South Atlantic Regional Center’s and USREDA’s work on the Palm House Hotel’s EB-5 venture. Almost $44 million was raised for the purchase and development of the Palm Beach hotel, the SEC complaint filed in August charged.