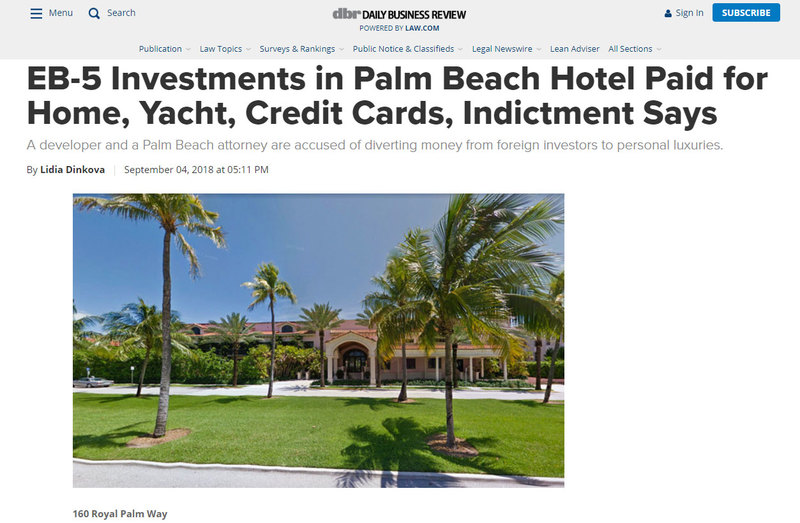 A developer and a Palm Beach attorney are accused of diverting money from foreign investors to personal luxuries.

What could sound more inviting? Invest in an unfinished Palm Beach condo-hotel steps from the Atlantic Ocean and a five-minute ride to President Donald Trump’s Mar-a-Lago club in exchange for U.S. visas.

Federal prosecutors say foreign investors flocked to the offering. But a Palm Beach developer and an attorney face charges that investment funds went instead to purchase two Connecticut properties and a 151-foot yacht, as well as credit card payments.

A federal grand jury in Connecticut issued the indictment, which focuses on Matthews’ plans for The Palm House Hotel at 160 Royal Palm Way and the EB-5 investment program, which offers foreign investors a path to a green card by putting at least $500,000 into a U.S. project that generates at least 10 new jobs.

In this case, prosecutors charge Robert Matthews and Evans schemed from 2012 to January to defraud investors, as well as the South Atlantic Regional Center LLC, a Palm Beach County organization that connects foreigners to investment opportunities in the U.S.

Investors were told their money would be used for The Palm House Hotel, well-known people would sit on the project’s advisory board and famous people from celebrities to politicians “will be part of the club,” the indictment said. Instead, Matthews and Evans wired investors’ money through various accounts for personal use.

Evans and Mathews pleaded not guilty to the original indictment and were free on bond.

“Mr. Evans denies all charges levied against him and looks forward to being vindicated at trial,” said Daniel Wenner, a partner at Day Pitney in Hartford, Connecticut.

Wenner noted no new charges were filed against Evans.

The superseding charges the couple, who have homes in Florida and Connecticut, tried to evade federal income taxes for 2005 and 2007. When the IRS sent them a notice setting a Sept. 2, 2016, deadline to pay their taxes to avoid an asset seizure, Robert Matthews sold a Mercedes-Benz for $82,000, paid off a lien and wired the sale proceeds to a trust account that belonged to Evans, according to the indictment.

Robert Matthews’ attorney, David Ring, declined comment. He is a partner at Wiggin and Dana in New Haven, New York and Washington.

Maria Matthews, 48, couldn’t be reached for comment. Ring said she is represented by Spears Manning partner Brian Spears in Connecticut, who didn’t return a request for comment by deadline.

The indictment offered a snapshot of a real estate transaction Matthews allegedly benefited from. He bought 115 Lower Church Hill Road in Washington Depot, Connecticut, in 2001, lost the five-bedroom, nine-bathroom house in foreclosure, and is accused of repurchasing it through a shell company with EB-5 funds.

Nicholas Laudano of Boynton Beach was the buyer. He also was the construction contractor for The Palm House Hotel and a restaurateur in Florida and Connecticut. He controlled several companies used in the alleged scheme and was charged separately.

Matthews also was accused of using EB-5 money to buy a neighboring property at 105 Lower Church Hill Road and for a down payment on the yacht.

The Matthewses appeared in court Tuesday in New Haven before U.S. Magistrate Judge Robert Spector to face the new charges. If convicted on the tax fraud count, the Matthewses face up to five years in prison.