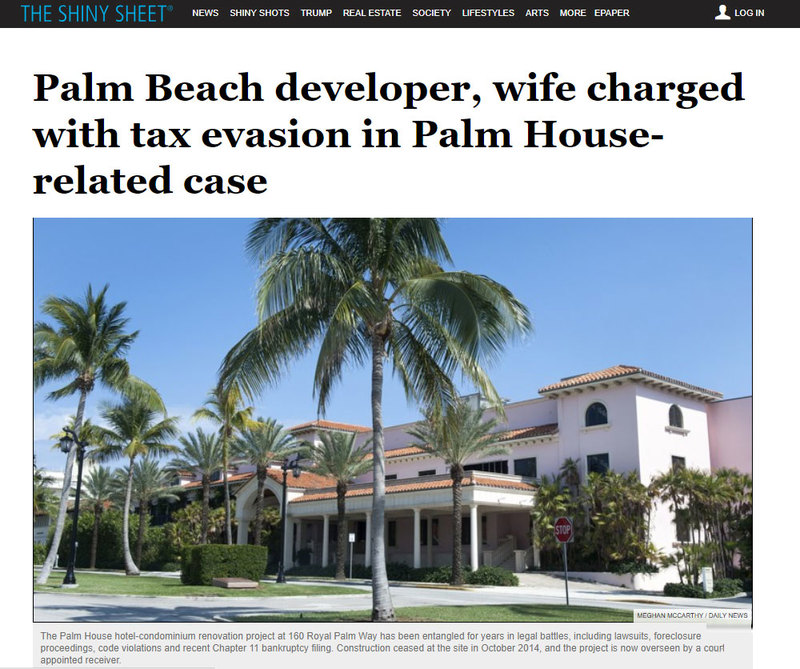 The Palm House hotel-condominium renovation project at 160 Royal Palm Way has been entangled for years in legal battles, including lawsuits, foreclosure proceedings, code violations and recent Chapter 11 bankruptcy filing. Construction ceased at the site in October 2014, and the project is now overseen by a court-appointed receiver.

A federal grand jury in Connecticut has indicted Palm Beach developer Robert V. Matthews and wife Maria “Mia” Matthews on a charge of felony tax evasion related to the Palm House case — the 21st charge in the case against Robert Matthews but the first against his wife.

For Robert Matthews, 60, the tax-evasion charge is in addition to the 20 counts he faces for allegedly scheming to defraud foreign investors in the long-dormant Palm House hotel condominium project on Palm Beach’s Royal Palm Way, according to federal investigators.

The tax-evasion allegation is the first and only charge brought against Mia Matthews, 48, in the case. The charge carries a maximum prison term of five years. The U.S. Attorney’s office in New Haven filed the indictment Friday.

Mia Matthews and her husband are scheduled to be arraigned Tuesday by U.S. Magistrate Judge Robert M. Spector in New Haven. Mia Matthews was not arrested but is expected to “self surrender” that day, said spokesman Tom Carson of the U.S. Attorney’s office in Connecticut.

The couple “maintained residences in both Florida and Connecticut,” according to a statement released Friday by the office of John H. Durham, U.S. attorney for the District of Connecticut. 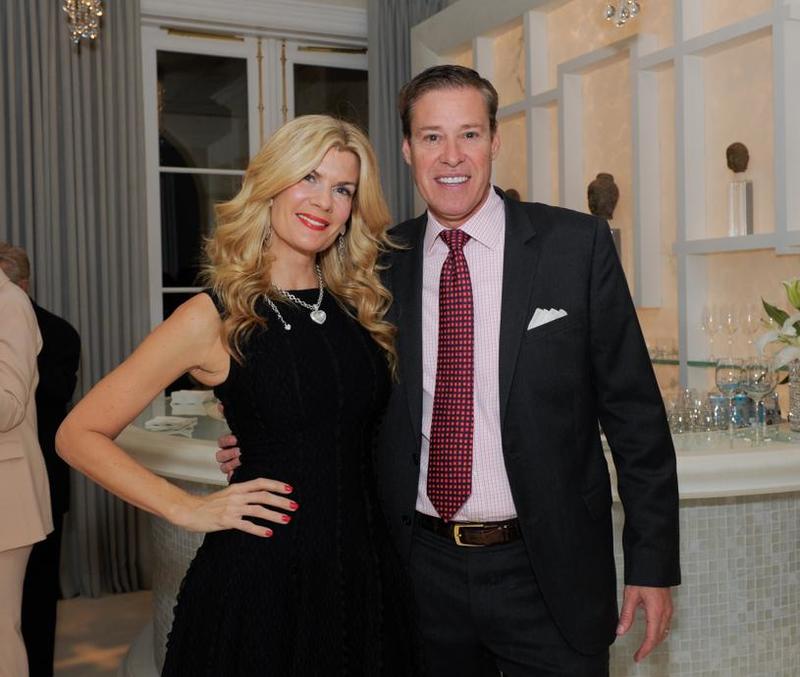 Mia and Robert Matthews were photographed at a reception for the Children’s Home Society of Florida at a private home in 2014.

Attorney David A. Ring, who is representing Robert Matthews, said he couldn’t comment on the case.

Mia Matthews is a singer and actress who won a regional Carbonell Award as best actress in a play for her 2016 performance in After at Zoetic Stage in Miami.

The tax-evasion charge against the Matthewses is part of a 21-count “superseding indictment” returned by the grand jury. The original grand jury indictment was returned in March and led to the arrest of Robert Matthews and Palm Beach real estate attorney Leslie R. Evans, 71, at their Palm Beach homes on fraud and money-laundering charges related to the Palm House.

Robert Matthews and Evans pleaded not guilty to all the charges in the original indictment. Both men are free on bond. 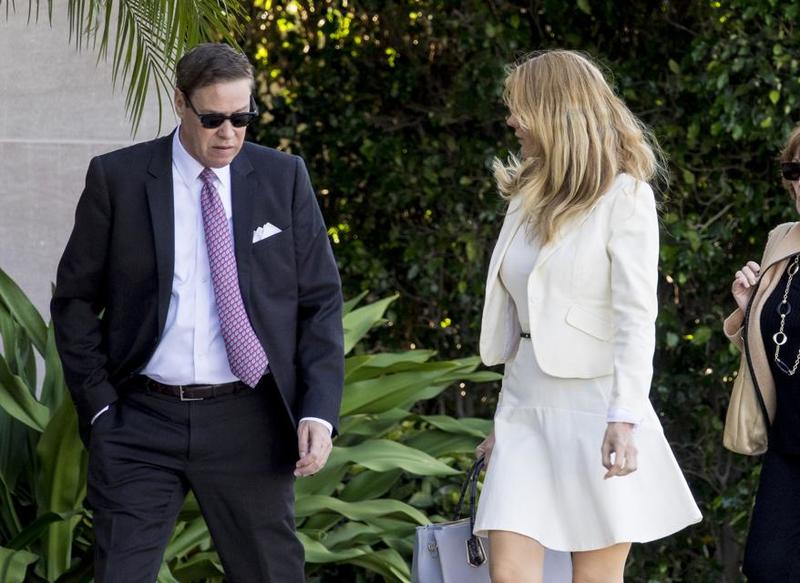 Robert V. Matthews, who is facing 21 felony criminal counts related to the Palm House hotel-condominium project, arrives with his wife

The new tax-evasion charge against the Matthewses involves, in part, money transfers into an “interest on trust account” (IOTA) administered by Evans, according to the superseding indictment.

According to Friday’s statement, the superseding indictment alleges that between about 2009 and March 2017, Robert and Maria Matthews “willfully attempted to evade paying federal income tax they owed for the 2005 and 2007 calendar years in multiple ways, including by using limited liability companies, a company bank account, and the Evans IOTA account to pay for personal expenses. In addition, after Robert and Maria Matthews received notice from the IRS that a failure to pay their delinquent income tax liabilities by September 2, 2016, would result in the seizure of all of their assets, Robert Matthews sold, on September 2, 2016, a Mercedes for $82,000 and, after paying off a lien, caused the proceeds of the sale to be wired into the Evans IOTA account.”

The Palm House renovation project at 160 Royal Palm Way has been entangled for years in legal battles, including lawsuits, foreclosure proceedings, code violations and recent Chapter 11 bankruptcy filing. Construction ceased at the site in October 2014, and the project is now overseen by a court-appointed receiver.

Foreign investors put money into the Palm House project through the federal EB-5 program, which offers foreign nationals and their families expedited permanent immigration visas — commonly known as green cards — into the United States in exchange for investing in U.S. construction projects under specific rules, the indictment said. The money was transferred between accounts in Florida and Connecticut, according to the indictment.

The indictment “alleges that Robert Matthews, Evans and others used EB-5 funding for purposes not related to the (Palm House) project, including for Robert and Maria Matthews’ personal gain,” according to Friday’s statement.

Walsh and his companies have not been charged in the Connecticut case. Court filings show EB-5 investors lived in China, Iran and Turkey.

Two other men in cases related to the Connecticut charges have been scheduled for sentencing hearings in June 2019. Gerry Matthews, who is Robert Matthews’ brother, and Boynton Beach construction executive Nick Laudano in March entered plea agreements in their cases. Gerry Matthews, a commercial real estate broker in Connecticut, pleaded guilty to one felony count of conspiring to commit wire fraud and could face a 20-year prison sentence. Laudano faces a maximum sentence of 40 years after pleading guilty to two felony counts — conspiracy to commit bank fraud and taking part in an illegal monetary transaction.

“As part of this alleged scheme, Robert Matthews, Evans and others moved investor funds through various bank accounts located in Connecticut and Florida,” Friday’s statement said. “The funds were used to pay Robert and Maria Matthews’ credit card debts, to purchase two properties located in Washington Depot (in) Connecticut and to assist in Robert Matthews’ purchase of a 151-foot yacht. One of the Washington Depot properties was a property that Robert Matthews had previously lost in foreclosure. Robert Matthews, Evans, Nicholas Laudano and others conspired to purchase the property out of foreclosure by concealing both the relationship between the co-conspirators, and the source of the funds used to purchase the property.”

The Connecticut allegations were investigated by the FBI and the IRS’s Criminal Investigation Division, the statement said.

Jury selection in Matthews and Evans’ singled fraud trial was originally scheduled for early June but a judge delayed that date until at least Sept. 4. Attorneys for both sides said they needed more time to review the government’s evidence and to prepare for trial.