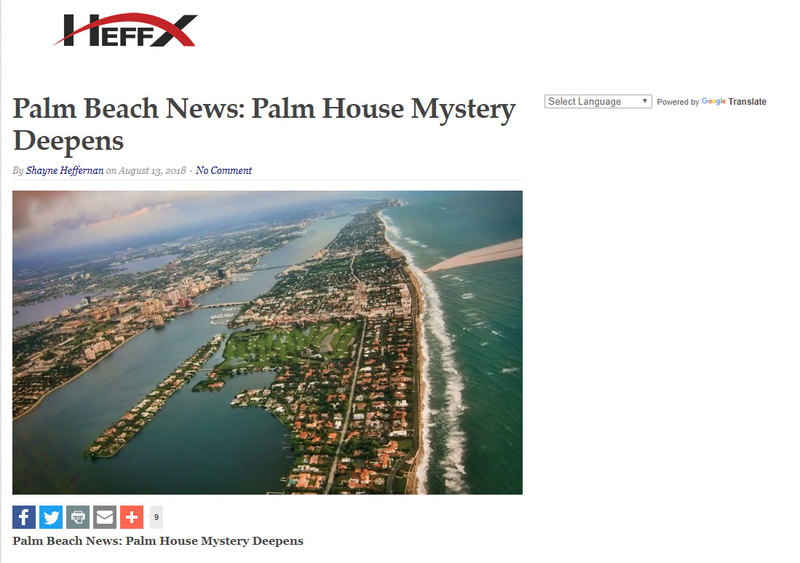 Those following the Palm Beach drama of Palm House Hotel would now be in a state of total confusion.

After the FBI made a very public arrest of Robert Matthews, he was slapped with charges that he masterminded a scheme to defraud EB5 investors of $50m.

At the time Joe Walsh boasted in a press release

These events represent a significant outcome for the EB5 investors, and Palm House Hotel, LLLP. The General Partner, Mr. Joseph Walsh, Sr. has consistently stated that he and his companies have been defrauded by the Matthews family and other co-conspirators; Robert Matthews, Gerry Matthews, Nick Laudano and Les Evans and others, as outlined in a civil RICO suit, filed by General Partner, SARC and Palm House Hotel, LLLP. The RICO suit outlines how fraudulent documents were prepared by several attorneys, purchases of luxury yachts, lavish homes, luxury cars, jewelry, vacations and the like.

These indictments, and the guilty pleas to date, show conclusively that these charges were founded on facts. It has taken many months to gather and assemble the forensic accounting evidence of the multiple companies, off-shore accounts and entities, properties that were purchased in the general contractor’s name, family trusts and other means specifically designed to hide millions of dollars of transactions using several accounts, over several years.

According to the SEC’s complaint, over a period of more than two years, Joseph J. Walsh and Robert V. Matthews defrauded dozens of foreign investors participating in the EB-5 program administered by the United States Citizenship and Immigration Services, which provides foreign nationals with an opportunity to qualify for permanent U.S. residency by investing in domestic, job-creating projects. According to the SEC’s complaint, Walsh raised close to $44 million from foreign investors which, through a loan, was to be used to acquire, develop, and operate a Palm Beach hotel controlled by Matthews. The complaint alleges that Walsh misappropriated more than $13 million of the investor funds and that Matthews misappropriated approximately $8 million, some of which he used to acquire a 151-foot yacht and to purchase his former Connecticut home out of foreclosure. According to the SEC’s complaint, Walsh and two companies he controlled – Palm House Hotel LLLP (PHH) and South Atlantic Regional Center, LLC (SARC) – also misled investors about the use of an escrow account that purportedly held investor funds prior to disbursement to the hotel, and about Walsh’s and Matthews’ backgrounds.

Another oddity in the case is the Palm House Chapter 11 filing, Former Delray Beach Mayor Cary Glickstein is the court-appointed receiver for the beleaguered Palm House put a valuation the property of a meager $16.45 million and there is $27.47 million first-mortgage lien, to a company controlled by Wellington businessman Glenn Straub, who had filed a foreclosure action against the Palm House’s ownership and adds a colourful sideshow to proceedings as he is in the process of suing 3 ex-girlfriends, the source of much amusement to the Palm Beach locals. Regardless of how he treats his lovers is Glenn Straub so inept at real estate valuations that he took a $27m bet on a $16m property, I am sure no one believes that.

It may well be years before we know what actually happened and a decade before the first guest checks in to the Palm House Hotel.