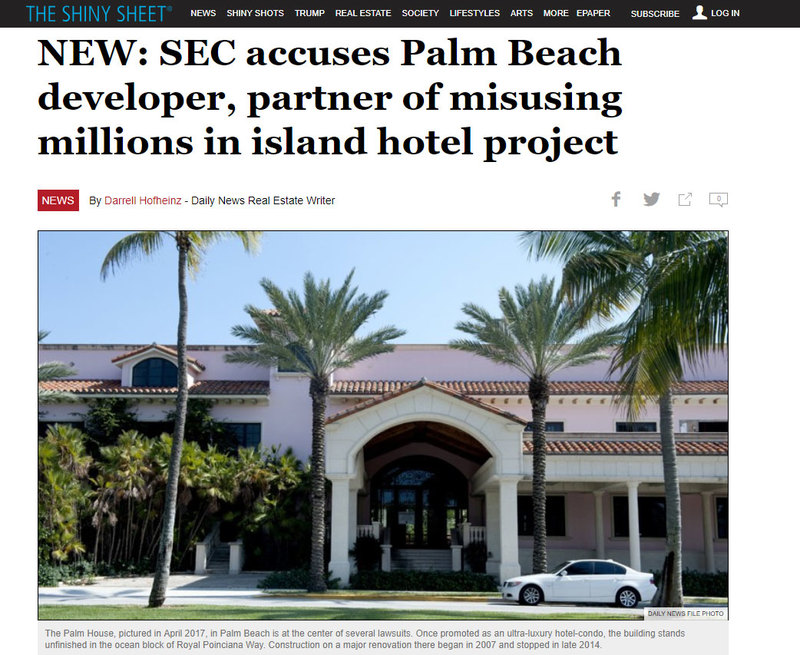 The Palm House, pictured in April 2017, in Palm Beach is at the center of several lawsuits. Once promoted as an ultra-luxury hotel-condo, the building stands unfinished in the ocean block of Royal Poinciana Way. Construction on a major renovation there began in 2007 and stopped in late 2014.

The Securities and Exchange Commission has accused a Palm Beach developer and another businessman of securities fraud for misusing millions of dollars solicited from foreign investors for the long-troubled Palm House hotel-condominium project in Palm Beach.

According to the complaint, Palm House promotional materials provided to investors said a Walsh-controlled company would lend money from investors to the hotel’s ownership company “to acquire, develop, and operate the Palm House Hotel.” 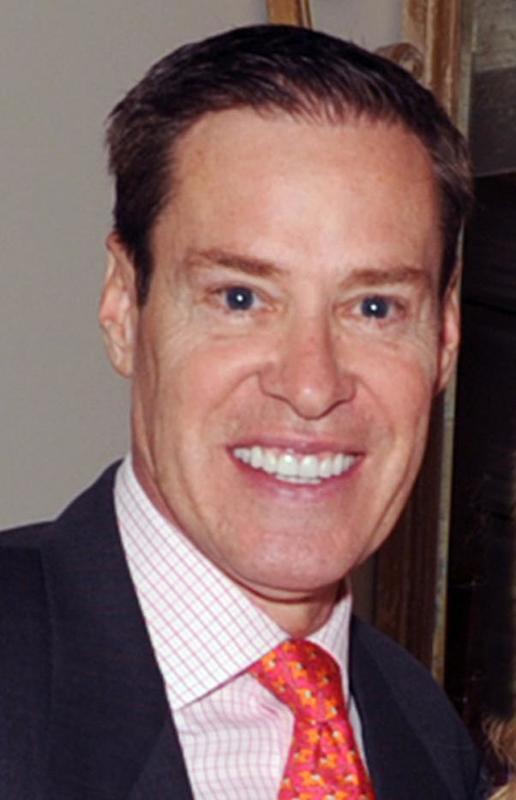 But Walsh, his companies and Matthews instead stole “a significant portion of the investor funds,” the complaint says. Walsh and his companies, for example, misappropriated about $13.58 million, the complaint alleges. Of that amount, Walsh kept at least $8.08 million and, in December 2013, made a loan of at least $5.5 million to Matthews to prevent the foreclosure of Matthews’ oceanfront mansion at 101 Casa Bendita, according to the complaint.

The action is the first complaint filed by federal authorities against Walsh and his companies over the renovation of the Palm House, which ceased construction in 2014. Once promoted as an ultra-luxury hotel-condo, the building stands unfinished in the ocean block of Royal Palm Way.

The SEC action is separate from the criminal fraud charges — also related to alleged financial improprieties at the Palm House — that Matthews faces in a U.S. district court in Connecticut. Matthews has pleaded not guilty to those charges.

The SEC complaint says Walsh’s Palm House Hotel LLLP “offered and sold” at least $43.99 million in securities to at least 88 foreign investors between November 2012 and March 2015. Those investors were solicited as part of the federal EB-5 program that provides so-called green cards to eligible foreign nationals who put at least $500,000 into U.S. construction projects that create a specified number of jobs. Under the terms of the program, those investors can be fast-tracked for permanent residency if they meet all of the program’s qualifications.

In 2014, Matthews violated securities laws by taking $3.4 million to buy a 151-foot yacht and a piece of property adjacent to the Palm House, the complaint says. That same year, Matthews also directed the transfer of about $4.5 million to buy his former house in Connecticut out of foreclosure and for other “related expenses,” according to the complaint.

“Matthews then extracted $1.2 million from the Connecticut home through a business purpose loan secured by the property, from which he and his family received $825,000,” the complaint says.

The four defendants lied to the EB-5 investors regarding the use of the investment money and the backgrounds of Walsh and Matthews, among other misrepresentations, according to the complaint. Walsh and his companies are specifically accused of misleading investors about an escrow account used to hold the funds before they were disbursed.

Also named in the complaint as “relief defendants” are the Palm House’s ownership company, 160 Royal Palm LLC, and another of Walsh’s companies, the U.S. Regional Economic Development Authority LLC d/b/a EB5 Petition. The complaint does not accuse them of wrongdoing but says they benefited from the alleged fraud. They are named in the complaint solely for the purpose of recovering investors’ funds, according to a statement about the case released by the SEC.

Tom Carson, a spokesman for the U.S. Attorney’s office for the District of Connecticut, reiterated this week that he had no comment about Walsh or his companies.

Shortly after Matthews and Evans were arrested in March in the Connecticut case, an attorney for Walsh and his South Atlantic Regional Center issued a statement about that case. Walsh and the company “have been absolved from blame or fault or wrongdoing in these indictments (brought in Connecticut) and SARC was identified as a victim in this fraudulent scheme perpetrated by several individuals,” the statement said.

In the March statement, Walsh said the indictments came as “both a relief and a breath of fresh air to see justice win out.”

Walsh also added: “There is much work to be done in trying to repair the damage to investors, reputations, business losses and ownership rights. However, these recent legal outcomes will open the pathway to accomplish these tasks.”

Last week, a court-appointed receiver filed for Chapter 11 bankruptcy protection on behalf of the Palm House ownership company, 160 Royal Palm LLC. Receiver Cary Glickstein, a former Delray Beach mayor, told the Palm Beach Town Council last month that a bankruptcy judge could clear the way for the property to be sold without liens or other legal encumbrances.

Over the past several years, the Palm House has been embroiled in a number of civil suits amid ownership disputes and a foreclosure action.

In November 2016, 63 Palm House investors filed a civil suit against Walsh, Matthews and other defendants in the same U.S. District Court where the SEC filed last week’s complaint. That ongoing suit contained allegations — many similar to the ones detailed in the SEC complaint — made by Palm House investors from China, Iran and Turkey, who alleged they were defrauded out of $50 million after investing through the EB-5 program.

Walsh and his companies, in turn, counter-sued, denying wrongdoing and making their own allegations. In July 2017, a federal judge dismissed some of the investors’ claims in the civil suit.

Attorney David J. George, representing the investors in the 2016 suit, said Tuesday that he and his clients welcomed the SEC’s complaint.

“We are pleased that the SEC has come to its own conclusions regarding the circumstances of our clients being defrauded and the parties responsible for that fraud. Our clients look forward to justice being done and hope to recover the moneys they have lost,” George said.

Alejandro O. Soto, the attorney representing the SEC in Miami, couldn’t be reached.