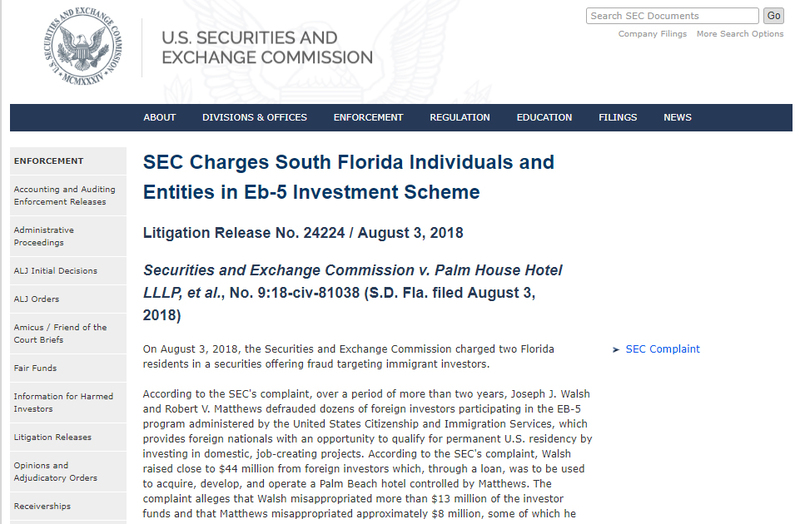 According to the SEC's complaint, over a period of more than two years, Joseph J. Walsh and Robert V. Matthews defrauded dozens of foreign investors participating in the EB-5 program administered by the United States Citizenship and Immigration Services, which provides foreign nationals with an opportunity to qualify for permanent U.S. residency by investing in domestic, job-creating projects. According to the SEC's complaint, Walsh raised close to $44 million from foreign investors which, through a loan, was to be used to acquire, develop, and operate a Palm Beach hotel controlled by Matthews. The complaint alleges that Walsh misappropriated more than $13 million of the investor funds and that Matthews misappropriated approximately $8 million, some of which he used to acquire a 151-foot yacht and to purchase his former Connecticut home out of foreclosure. According to the SEC's complaint, Walsh and two companies he controlled - Palm House Hotel LLLP (PHH) and South Atlantic Regional Center, LLC (SARC) - also misled investors about the use of an escrow account that purportedly held investor funds prior to disbursement to the hotel, and about Walsh's and Matthews' backgrounds.

The SEC's investigation was conducted by Shelly-Ann A. Springer-Charles, Timothy J. Galdencio, and Crystal C. Ivory and was supervised by Eric R. Busto. The SEC's litigation will be led by Alejandro Soto. The SEC appreciates the assistance of the United States Citizenship and Immigration Services.