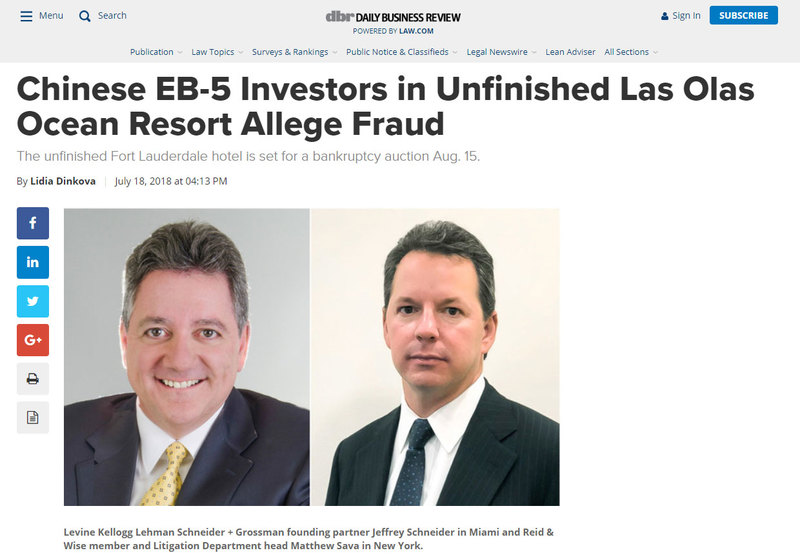 The unfinished Fort Lauderdale hotel is set for a bankruptcy auction Aug. 15.

Chinese investors who put $10.5 million into the unfinished Las Olas Ocean Resort in exchange for EB-5 visas were tricked into contributing with loan term misrepresentations, according to a federal lawsuit.
The complaint filed Monday is the latest issue to plague the beachfront venture, which filed for  bankruptcy protection. The plan was for a 12-story hotel with 136 rooms at 550 Seabreeze Blvd.

Developer 550 Seabreeze Development LLC sought protection Feb. 26, a month after its construction lender alleged the developer was in default and owed more than $37 million in principal and fees, according to court records.

During a hearing Wednesday before U.S. Bankruptcy Judge Raymond Ray, a stalking horse bid of $39.1 million, which sets the floor for a bankruptcy auction, was approved, said the developer’s attorney Glenn Moses, a shareholder with Genovese Joblove & Battista in Miami.

MHF Properties VI LLC, an affiliate of Warwick, Rhode Island-based Magna Hospitality Group, submitted an initial stalking horse bid of $38.6 million but upped the ante, Moses said. Any other bidders would have to offer at least $39.6 million by Aug. 10, and an auction would be held Aug. 15.

Issues started playing out in federal court in January when Bancorp Bank, a state-chartered bank in Delaware that issued the construction loan, sued the developer, seeking to foreclose based on the alleged default.

Bancorp, which was substituted as plaintiff by Ocean Hotel Lender LLC, asked the court to appoint a receiver to manage and oversee the property, Before a decision was made, the developer filed for bankruptcy protection.

In the latest litigation filed Monday by investors, 21 creditors are suing Bancorp and Ocean Hotel. Each put in at least $500,000 under the EB-5 program granting green cards to foreigners whose U.SA. investments create at least 10 permanent jobs.

Investors say they were told in Bancorp letters that in case of a default, each would be given ownership of a hotel room, according to the complaint.

“The documents as finally written which were not shown to them or told to them in advance changed that and added additional conditions to that right,” said Jeffrey Schneider, a founding partner at Levine Kellogg Lehman Schneider + Grossman in Miami, who filed the investors’ complaint along with Reid & Wise member and litigation department head Matthew Sava in New York.

The complaint lists fraud in the inducement, civil conspiracy, aiding and abetting fraud, equitable subordination and objection to claims counts.

Jack Kessler is a shareholder with Buchanan Ingersoll & Rooney in Fort Lauderdale. He didn’t respond to a request for comment.

Bancorp issued an initial $21.5 million project loan. When Las Olas Mezzanine Borrower sought another loan from the bank, that $50 million loan was contingent on investment from 60 EB-5 investors, according to the complaint.

“The ultimate goal is to seek damages or the unit to which they (investors) are entitled or to equitably subordinate the bank’s claim because of its inequitable conduct toward another creditor. In other words, the bank knew about the promises that were made to the EB-5 investors in order to induce them to invest,” Schneider said.

The equitable subordination claim seeks to reshuffle the priorities among project lenders once the bankruptcy auction is done.

“We are saying because the bank had engaged in this wrongful conduct, that as a matter of fairness their claim should be pushed down. They should not have the first claim. Our client’s claim should come ahead of the bank,” Sava said.

Ultimately, the Chinese investors also are seeking a green card. To that end, Sava and Schneider are asking that the resort buyer be required to complete the project in compliance with EB-5 requirements.

Moses, the developer’s attorney, said compliance with EB-5 regulations will be considered when picking the buyer but won’t be imposed as a condition.

Overall, 60 EB-5 investors put a combined $60 million into the project, according to the complaint.

Although 21 Chinese investors sued, other investors from other countries are expected to join the lawsuit once word gets out, Schneider added.

Construction on Las Olas Ocean Resort, which is 70 percent complete, has halted, but 550 Seabreeze is maintaining and preserving the property, said Moses.