A Significant Outcome has Been Achieved for Investors in the Palm House Hotel by USREDA, SARC and its Companies 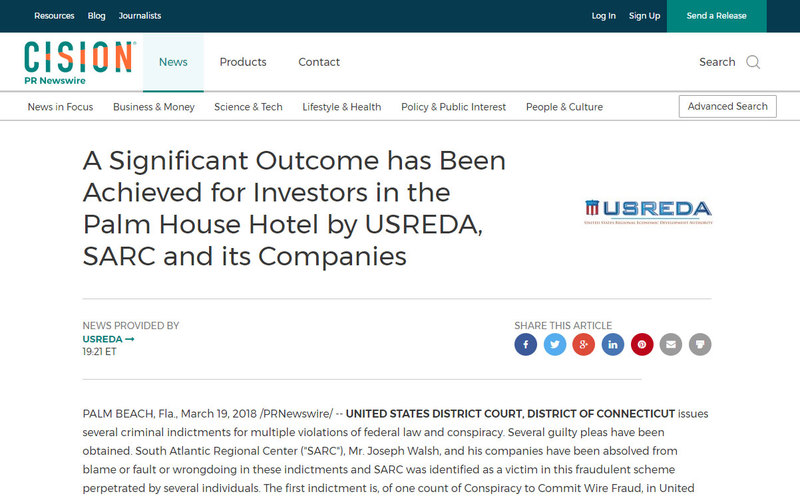 UNITED STATES DISTRICT COURT, DISTRICT OF CONNECTICUT issues several criminal indictments for multiple violations of federal law and conspiracy. Several guilty pleas have been obtained. South Atlantic Regional Center ("SARC"), Mr. Joseph Walsh, and his companies have been absolved from blame or fault or wrongdoing in these indictments and SARC was identified as a victim in this fraudulent scheme perpetrated by several individuals. The first indictment is, of one count of Conspiracy to Commit Wire Fraud, in United States of America v. Gerry Matthews of Connecticut. He pled guilty to the charges, and his brother Mr. Robert Matthews yesterday was arrested at his home in Palm Beach. Mr. Robert Matthews was indicted on 20 counts of fraud and conspiracy. He is incarcerated and will be arraigned on Monday, March 19th, 2018. Mr. Nick Laudano was also indicted on several counts of conspiracy to commit fraud. Mr. Laudano also plead guilty to the charges. Mr. Les Evans, of Palm Beach, an attorney, was subsequently charged with 11 counts of conspiracy and fraud, and was released on bail.

These events represent a significant outcome for the EB5 investors, and Palm House Hotel, LLLP.  The General Partner, Mr. Joseph Walsh, Sr. has consistently stated that he and his companies have been defrauded by the Matthews family and other co-conspirators; Robert Matthews, Gerry Matthews, Nick Laudano and Les Evans and others, as outlined in a civil RICO suit, filed by General Partner, SARC and Palm House Hotel, LLLP. The RICO suit outlines how fraudulent documents were prepared by several attorneys, purchases of luxury yachts, lavish homes, luxury cars, jewelry, vacations and the like.

These indictments, and the guilty pleas to date, show conclusively that these charges were founded on facts. It has taken many months to gather and assemble the forensic accounting evidence of the multiple companies, off-shore accounts and entities, properties that were purchased in the general contractor's name, family trusts and other means specifically designed to hide millions of dollars of transactions using several accounts, over several years.

Mr. Walsh, further commented that it has taken years to get to this point. Whereby, several individuals, who were systemically using and abusing the legal system to wear down their opponents, at a personal and business of cost millions of dollars.  Mr. Walsh went on to say, "It saddens me to see the waste of time, money and talent, and the human and financial capital that these conspirators perpetrated in multiple courts and plain good old fashion lies to continue their charade for years. It is both a relief and a breath of fresh air to see justice win out. This should bring a sense of hope to all involved and furthers the concept of the "rule of law" that still pervades our country."

Mr. Walsh also noted: "There is much work to be done in trying to repair the damage to investors, reputations, business losses and ownership rights. However, these recent legal outcomes will open the pathway to accomplish these tasks." To date, the countersuit against the EB5 Investors, filed by Mr. Walsh and Companies in the federal lawsuit remains pending. This countersuit primarily seeks to bring to light fraud on part of the Plaintiffs which was discovered after the federal suit was filed against Mr. Walsh. These counter allegations include Plaintiffs recommending the bribing of US Officials for immigration processing benefits, as well as back door deals with the Palm House Developer, Mr. Robert Matthews just indicted, to see capital funds removed from the project prior to the eligibility dates afforded by laws governing the EB5 Program. On July 22nd, 2017, the United States District Court Southern District of Florida issued a dismissal of a certain allegations against Mr. Walsh, Mr. Walsh Jr, and associated companies levied in a suit filed by the Gunster Law Firm, including their RICO claim. These recent indictments further prove the allegations being brought by individuals, agents and others who themselves participated in the conspiracy and have used this cover of false allegations to protect themselves.

Mr. Walsh and his companies continue to strive for resolution in the matters of fraud perpetrated on the LLLP, himself, and his Companies by the true "Bad Actors", some of whom have now been clearly identified in these indictments and the subsequent guilty pleas to date. It has been a costly fight, but hope remains for a positive outcome for those LPs who are found to be innocent of wrongdoing.

"Palm House Hotel, LLLP, will fully cooperate with any purchaser of financial means that has the ability to preserve and advance the immigration status of our clients," said Mr. Joseph Walsh, General Partner of SARC who is the General Partner of the Palm House Hotel, LLLP. "We welcome input from the Limited Partners in the case going forward to finalize a solution that is most beneficial to all parties concerned. Our many months of diligent and costly litigation has led to this significant outcome for the benefit of the investors, and their immigration needs," said Mr. Walsh.

South Atlantic Regional Center, (SARC), and its affiliates, have fully funded this investigation.  The indictments reflect a consistent and determined approach to complete the project, and provide a path to each Limited Partner in their effort to receive immigration status in the US. "We are delighted with the results because this represents the first steps to restarting the project, creating the Job Creating Entity, as required by the USCIS in the EB5 program, and creating a clear path to retrieve the funds fraudulently used by the Matthews family and others. Our hope has always been for our partners and their success in achieving their ultimate goal of immigration status in the United States. It has taken many thousands of hours of discovery, and millions of dollars of expense to achieve this opportunity to unravel this fraudulent scheme perpetrated by the Matthews family and others on innocent investors. Often the justice system in the USA is slow and methodical but justice does have her way. Our many attorneys and counselors have forged a path to a good outcome that will benefit the investors, the immigration, the Town of Palm Beach and the project," stated Mr. Walsh.