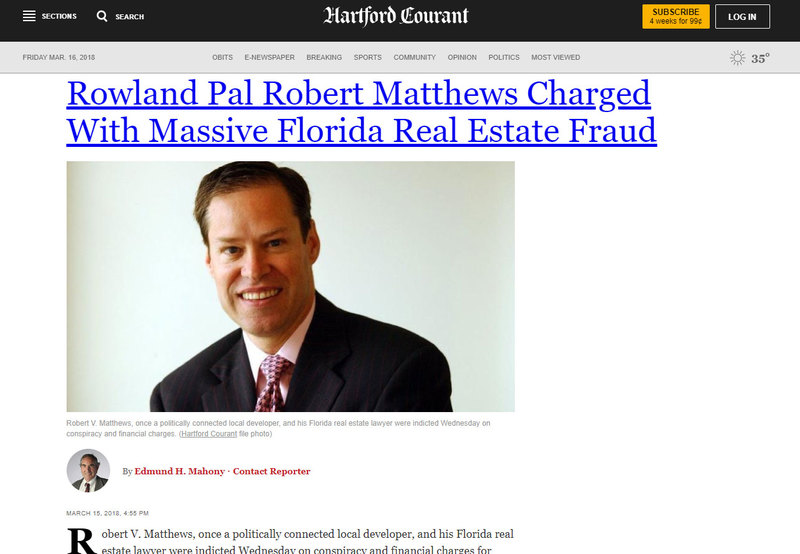 Robert V. Matthews, once a politically connected local developer, and his Florida real estate lawyer were indicted Wednesday on conspiracy and financial charges.

Robert V. Matthews, once a politically connected local developer, and his Florida real estate lawyer were indicted Wednesday on conspiracy and financial charges for swindling dozens of foreign investors who they persuaded to sink millions of dollars into a proposed Matthews hotel-condominium project in Palm Beach.

Matthews, 60, and attorney Leslie R. Evans, 70, face potential sentences of decades in prison. Both were picked up by federal authorities at their Palm Beach homes Thursday morning. Matthews was jailed and held for a bail hearing next week. Evans was released after posting a $250,000 bond.

The two are charged in a 20-count indictment with a variety of conspiracy, fraud and money laundering offenses. Two others also have been charged and pleaded guilty in recent days: Matthews’ brother Gerry and Nicholas Laudano, a Palm Beach building contractor who owns pizza parlors in Florida and the New Haven area.

Matthews was involved early in his development career with projects in Waterbury and was once closely associated with former Gov. John G. Rowland. At one point, when Rowland was trying to sell a Washington, D.C., condominium, Matthews arranged its purchase at a substantial markup in price. Years later, when Rowland was governor, he was accused of intervening with state development officials on Matthews’ behalf.

Matthews and his development projects have been subjects of federal law enforcement attention for years. But until Wednesday, he had not been charged. The indictment was returned by a federal grand jury in New Haven and unsealed Thursday afternoon. Matthews and the others are being prosecuted in Connecticut.

In the scheme targeted by the indictment, Matthews and the others proposed developing a property known as The Palm House Hotel, a property of which Matthews has been the on-again, off-again owner for years.

The indictment asserts that Matthews and the others used a federal visa program known as the EB-5 program to lure foreign investment to The Palm House Hotel. Under the program, foreign nationals can obtain U.S. residency visas by making substantial investments in qualified U.S. development projects that create jobs. About 60 investors from China and Iran made threshold investments of $500,000.

Matthews and the others made a variety of wildly attractive, but ultimately empty promises to recruit investors, according to the indictment and an investor lawsuit that tracks the criminal case. The suit alleges that Matthews was described as one of the country’s top real estate developers and that "Donald Trump and Bill Clinton would serve on the Palm House Hotel advisory board and ... play a key role in recruiting celebrities and dignitaries to the club" such as Tony Bennett, Celine Dion, Bill Koch and Eric Schmidt.

The suit says Matthews and others took Chinese investors' representatives to a charity event at Trump’s Mar-a-Lago resort in Palm Beach — before the would-be president was elected — and "arranged for them to take pictures with Donald Trump in an effort to further create the facade that Robert Matthews was an important, wealthy, and trustworthy member of American society and on par with Donald Trump."

The investors claim in their suit that they lost their money, never received visas, that no work was done on the hotel, there were no celebrities associated with the project and that Matthews and the others spent millions on themselves. Among other things, Matthews is accused of using investor money for the down payment on a 151-foot yacht.

A lawyer for the jailed Matthews could not be reached. Evans’ lawyer, Ross Garber of Hartford, said Evans “is disappointed that he was also named as a defendant in this case by the government against a former client. But the allegations closely track those that have been made before in civil cases, and which Mr. Evans has been fighting vigorously.”

Laudano’s lawyer, Robert Casale of Guilford, did not return a call. A lawyer for Gerry Matthews could not be reached.

The indictment also accuses Matthews and the others of using investor money to reacquire property in rural Washington Depot, Conn., that Matthews had lost previously to foreclosure.

Laudano is originally from New Haven and opened a chain of pizza restaurants in Florida which advertised New Haven-style pizza. Two years ago, he opened the Ah-Beetz pizza parlor on Temple Street between Chapel and Crown in New Haven.