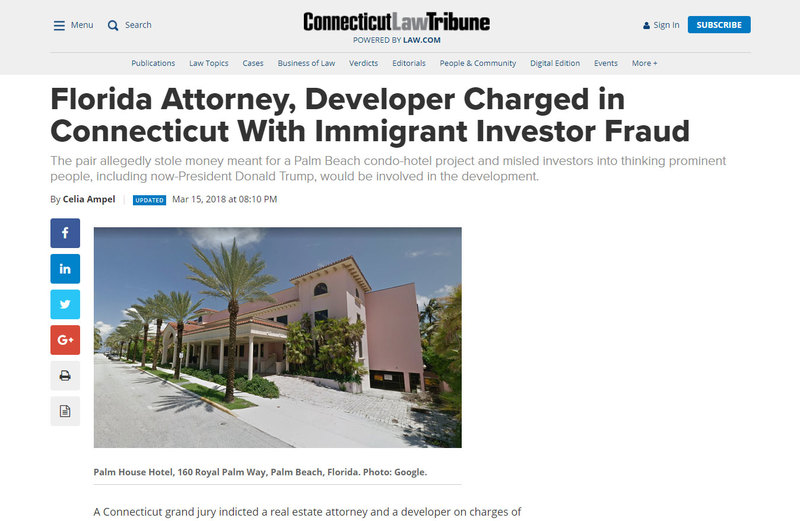 The pair allegedly stole money meant for a Palm Beach condo-hotel project and misled investors into thinking prominent people, including now-President Donald Trump, would be involved in the development.

A Connecticut grand jury indicted a real estate attorney and a developer on charges of defrauding visa seekers who invested in a South Florida condo-hotel project.

Federal officials allege the pair took investor money meant to fund the Palm House Hotel project, and used it for personal gain. They also allegedly misled investors to believe well-known entertainers, politicians and businesspeople, including now-President Donald Trump, would be involved in the project.

The project was part of the EB-5 visa program, which allows foreign investors to secure green cards by funding job-creating projects in the U.S. EB-5 fraud often puts investors’ immigration status at risk, as seen in Vermont’s Jay Peak ski resort scheme, which also had ties to South Florida.

The alleged scheme has been the subject of litigation since at least 2016, when more than 50 investors in the Palm House project alleged they were defrauded of $50 million. The plaintiff investors were Chinese and Iranian.

The investor funds flowed through the EB-5 intermediary South Atlantic Regional Center LLC in Palm Beach, which was not involved in the scheme, according to the indictment. Matthews, Evans and other co-conspirators then allegedly moved the funds through bank accounts in Connecticut and Florida. Some of the investor money came through Evans’ client trust account.

“The funds were used to pay Robert Matthews’ credit card debts, to assist in Matthews’ purchase of a 151-foot yacht, and to purchase two properties located in Washington Depot, Connecticut,” the U.S. Attorney’s Office for the District of Connecticut said in a statement. “One of the Washington Depot properties was a property that Robert Matthews had previously lost in foreclosure.”

Evans, 70, was admitted to the Florida Bar in 1984 and has no disciplinary history in the past decade. He leads the six-attorney real estate law firm Leslie Robert Evans & Associates in Palm Beach. Evans was released from custody Thursday on a $250,000 bond.

Matthews, 60, had homes in both Connecticut and Florida. He bought the Palm House Hotel property in 2006 but lost it in foreclosure a few years later. In 2013, he bought the property again through a limited liability company that listed his brother, Gerry Matthews, as a 99 percent owner. Another financier owned the remaining 1 percent. In reality, according to the indictment, Robert Matthews controlled the company.

Matthews was detained ahead of a hearing next week.

According to the 2016 lawsuit, the investors’ immigration agents were taken to Mar-A-Lago to take photos with Trump, whom they were told would be on the Palm House Hotel Advisory Board. “There is no such board,” the lawsuit claimed.

The investors were told the advisory board would also include former President Bill Clinton, Celine Dion, Bill Koch and Eric Schmidt, the lawsuit alleged.