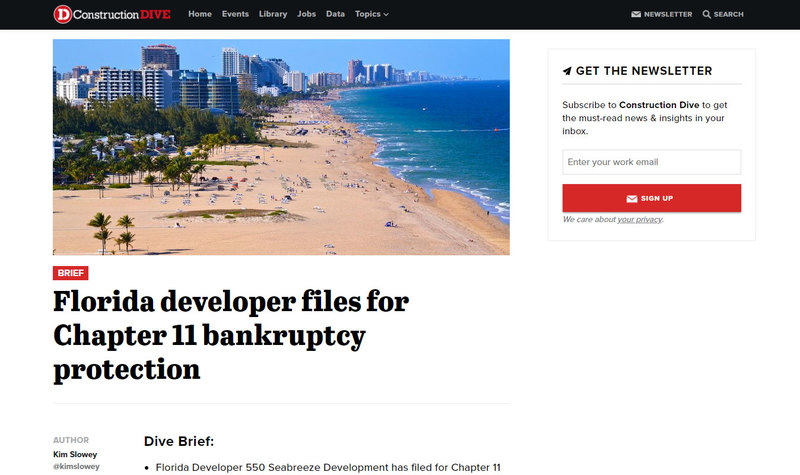 Dive Insight:
The Seabreeze bankruptcy highlights the sometimes-fragile nature of foreign investment in U.S. construction and real estate projects. The EB-5 program allows individuals from other countries to put a minimum of $500,000 into a qualified development in exchange for fast-tracking of their green card applications, but the process relies on the stability and truthfulness of those in charge of the project.

Many projects, like Hudson Yards in Manhattan, have used EB-5 funds successfully. Murmurings have alluded to other New York City projects like the $3 billion One Vanderbilt office tower and the $2.5 billion Brooklyn Navy Yard expansion also using the program.

However, some developers have either intentionally misled EB-5 investors or encountered financial difficulties in their projects' executions — and both of those scenarios spell trouble for the green card application process.

Work on the $2 billion Wade Park, one of the developments along the "$5 Billion Mile" in Frisco, Texas and a recipient of EB-5 investor money, has stopped after developers reportedly stopped making payments to contractors. Lenders have taken legal action to force a sale of the property in order to recover about $130 million in loans, but developers are negotiating a deal that could see the project move forward. If that effort is not successful, the EB-5 investors could see their eligibility for permanent residency revoked.

Seattle developer Lobsang Dargey reportedly took advantage of EB-5 investors intentionally by transferring their funds to projects that the U.S. Citizenship and Immigration Services had not approved, guaranteeing approval of those investors' green card applications and overinflating his finances in his investor presentations. Dargey pleaded guilty in January 2017 to spending money earmarked for EB-5 investment funds on luxury gifts for his family and friends and was sentenced to four years in prison. He also paid $24 million in restitution.