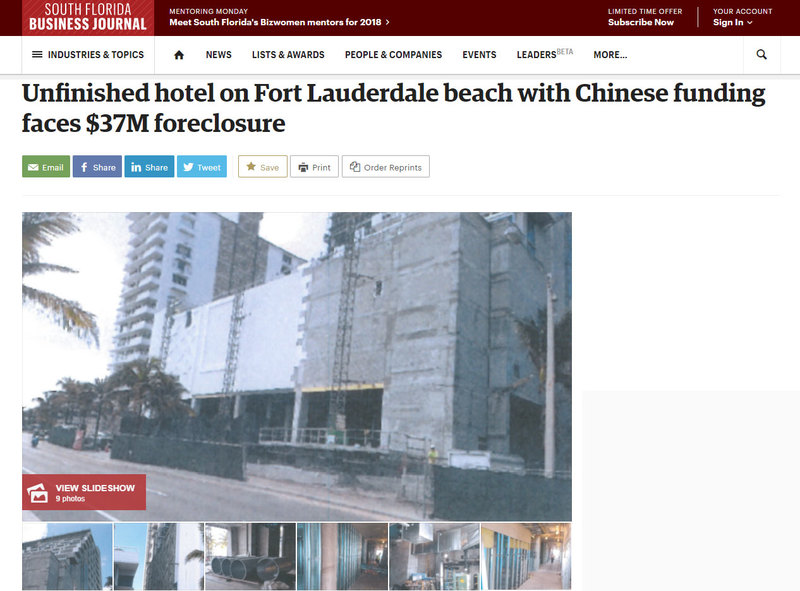 The unfinished Las Olas Ocean Resort, a hotel project on Fort Lauderdale beach that attracted funds from hopeful Chinese immigrants through the EB-5 visa program, has been targeted for foreclosure.

The Bancorp Bank (NYSE: TBBK) filed a foreclosure lawsuit on Jan. 25 in U.S. District Court in Fort Lauderdale against 550 Seabreeze Development LLC and JAWOF 515 Seabreeze LLC over a mortgage with $36.94 million in principal due. It concerns the partially-completed hotel that was slated for 136 rooms in 12 stories, a four-story parking garage with 268 spaces, and a 12,000-square-foot restaurant.

The hotel has been under construction on the 34,299-square-foot lot at 550 Seabreeze Blvd./525 South Florida Lauderdale Beach Blvd. The developer also owns the 18,372-square-foot parking lot across the street at 515 Seabreeze Blvd.

In addition to seeking to foreclose the project, Bancorp Bank filed an emergency motion to appoint a receiver for the property due to the borrower’s alleged “mismanagement and incompetence” and an alleged warning from general contractor Straticon in early January that it would “walk off” the job unless it is paid.

Attorney Rebecca S. Trinkler, who represents 550 Seabreeze Development, couldn’t immediately be reached for comment. The plaintiff’s letters to the developers identified Raymond Parello, Ken Bernstein, Eugene Kessler, and Jack Kessler as principals of the hotel developer. None of them were named in the lawsuit.

A website promoting the Las Olas Ocean Resort as an EB-5 visa investment mentions all four of those individuals as partners. Investors were asked to invest at least $500,000 in exchange for qualifying for a visa to immigrate to the U.S.

Bancorp Bank’s motion for receivership says 550 Seabreeze Development raised $30 million from Chinese investors through the EB5 program, and those funds were considered debt secured by an equity interest in the parent company.

The bank originally granted a mortgage of up to $50 million to 550 Seabreeze Development in 2013. Construction started in 2015 and the loan required it to be completed by the end of March 2017, a date the developer missed, according to the complaint.

Bancorp Bank hired Michael McGrenra of Dayhill Group to oversee the project during construction. In a signed affidavit, he said the developer failed to adequately protect the property in advance of Hurricane Irma and that the delay from the hurricane should have been no longer than four weeks.

The delays at the project were “primarily the result of poor management and lack of funding,” McGrenra stated.

The complaint alleged that 550 Seabreeze Development defaulted by failing to make a payment in December 2017, by terminating its lease with restaurant Senor Frog, and by losing a property management agreement with Aston Hotels and Resorts Florida.