Work to begin on connecting Pa. Turnpike and I-95 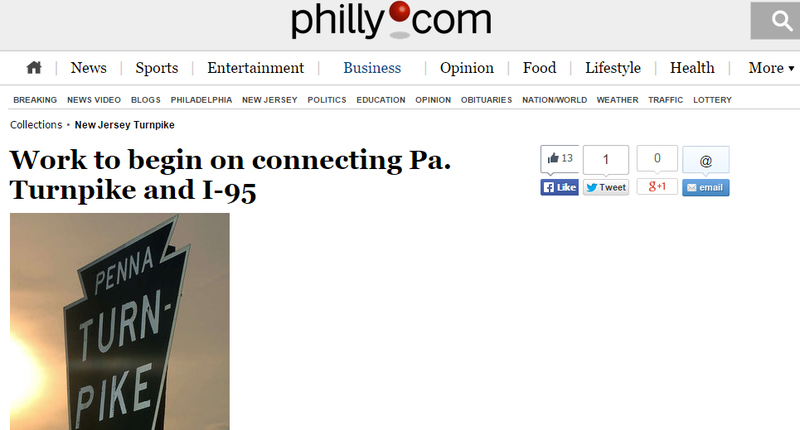 Construction is to start late next month or in early October on the long-awaited direct connection between Interstate 95 and the Pennsylvania Turnpike, after the award of a $142.9 million contract to a Bucks County firm.

PKF-Mark III Inc., of Newtown, won the contract from the Pennsylvania Turnpike Commission to build the first section of the $420 million Stage 1 of the new interchange that will finally provide an unbroken I-95 between Maine and Florida.

For decades, I-95 has been incomplete in New Jersey near Trenton.

The $142.9 million will pay for widening and reconstructing about four miles of the turnpike in Bristol Township, where the connection with I-95 will be built. It will also pay for building three new turnpike bridges and installing the piers for the flyover ramps for the connection.

Since I-95 was built through Bucks County in 1969, crossing the turnpike, truckers and other motorists have complained about the lack of a direct link between the two superhighways. Drivers must exit to local roads and then enter the adjoining highway.

That was a result of a federal prohibition at the time on using federal highway funds for toll roads, such as the turnpike.

All of the other direction connections will have to wait for the still-unfunded Stage 2, which is expected to cost about $600 million and begin construction in 2020.

The first stage will include the two high-speed "flyover" connections, a new mainline turnpike toll plaza, and a new all-electronic toll facility to collect tolls from westbound-only traffic just west of the Delaware River.

The new all-electronic toll gantry will mean an additional toll for westbound drivers on the turnpike, starting in November or December 2015. 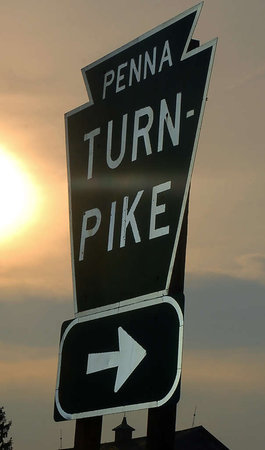 Both eastbound and westbound drivers also will be charged tolls at a relocated toll plaza eight miles away, just east of the Bensalem interchange.

The new westbound-only toll will be similar to the Gateway toll facility for eastbound-only drivers at the other end of the turnpike, just east of the Ohio border.

Unlike the Gateway facility, though, the new Bucks County toll gantry will be all electronic, with drivers paying by E-ZPass or by mail after their license plates are photographed.

Drivers without E-ZPass will have to pay a premium for paying by mail, turnpike spokesman William Capone said. He said the amount of the extra charge has not been determined.

Also, turnpike officials are seeking a change in state law to allow them to suspend the vehicle registrations of motorists who don't pay the toll when billed by mail. Such a law would also allow Pennsylvania authorities to make agreements with other states to enforce toll-payment by out-of-state drivers.

About 80 percent of turnpike users entering or leaving Pennsylvania at the Delaware River now use E-ZPass, Capone said.

Eventually, in 2025 or later, Stage 3 construction will begin on a second Delaware River bridge just south of the current span.

The cost of the entire direct-connection construction, including the new bridge, is estimated to be about $1.4 billion.

The heavily indebted Turnpike Commission is providing $42.9 million of the $142.9 million project; the other $100 million is federal funding.

A second phase of Stage 1, with about $87 million in federal funding, is expected to start construction in July 2015, to complete the first flyover connections. That is due to be finished by 2018.

"We're doing it in stages because we didn't have enough money to do it all at one time," Davis said.

To cover about $200 million in construction costs, the Turnpike Commission has come up with an exotic financing plan that involves borrowing from wealthy foreign investors in exchange for green cards for the investors and their families to live in the United States.

Last year, the Turnpike Commission signed a $200 million loan agreement with a newly created firm, DVRC Pennsylvania Turnpike L.P., which plans to collect at least $500,000 each from foreign investors, expected to be mainly from China.

The firm will then lend the money to the turnpike for construction of the I-95 connection.

The investors and their families will get a quick path to legal residence in the United States, under the federal Immigrant Investor Program that grants "EB-5" immigration visas to foreigners who provide money to U.S. projects that will create at least 10 American jobs.

The Turnpike Commission expects to collect the first $50 million from its foreign investors in December.