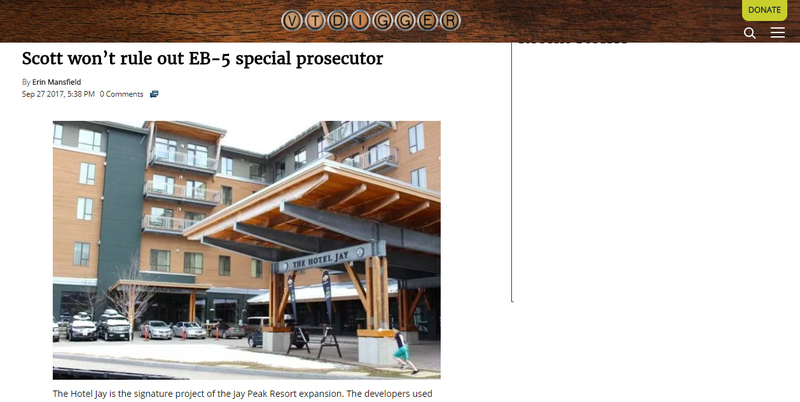 Gov. Phil Scott says he has not ruled out whether there should be a special prosecutor to look into alleged EB-5 fraud in the Northeast Kingdom involving Jay Peak and related companies.

Scott’s comments come in response to questions raised by Tom Evslin, a businessman and former official for Gov. Jim Douglas. Evslin asked in an opinion piece in VTDigger whether the state needs a special prosecutor to “investigate and prosecute” state officials involved in the alleged fraud.

Scott also raised concerns on Wednesday about the argument the attorney general’s office made in court on Monday saying that the state is immune from being sued by investors over the EB-5 program. Investors have filed a class-action suit alleging that state officials were complicit in the EB-5 fraud.

“Tom Evslin may not be incorrect,” Scott said. “I’m just not sure how to do that, how that would happen, but it’s something to be thinking about.” He said Evslin’s suggestion marked “the first I’d really contemplated something of that magnitude, but it could be something that could be beneficial. We’ll talk about it.”

The U.S. Securities and Exchange Commission has alleged since 2016 that fraud in the EB-5 program dates back nearly a decade — a time period that encompasses the administrations of both former Govs. Peter Shumlin, a Democrat, and Douglas, a Republican.

Under the auspices of the Vermont Agency of Commerce and Community Development, the state had been running the Vermont EB-5 Regional Center to promote EB-5 projects such as the ones at Jay Peak. The Legislature defunded the regional center earlier this year, and the feds have announced its intent to close it.

“We want to be as transparent as possible,” Scott said of the EB-5 program. “We’ll see what happens in the near future, but I want to make sure that we release all the information we can so that … people have some trust with the government.”

He said arguing the state is immune from lawsuits doesn’t inspire faith or trust in government.

“When I read the media reports, when I hear immunity, and that’s the basis for an argument that we won’t know what’s happening — that the state is immune from litigation — that doesn’t give me a good feeling in my soul,” Scott said.

“I understand immunity in some respects, when we’re talking about all our transportation infrastructure, and so forth,” Scott said. “We would be in constant, constant litigation, I believe, if we didn’t have some immunity, but we have to use that righteously.”

He said: “What I think we should be doing is trying to explain what happened, try and lay out the situation. … Our attorney general is working on the state’s behalf to try and protect the state (in the investor case). I’m just saying that I think we need to be careful.”