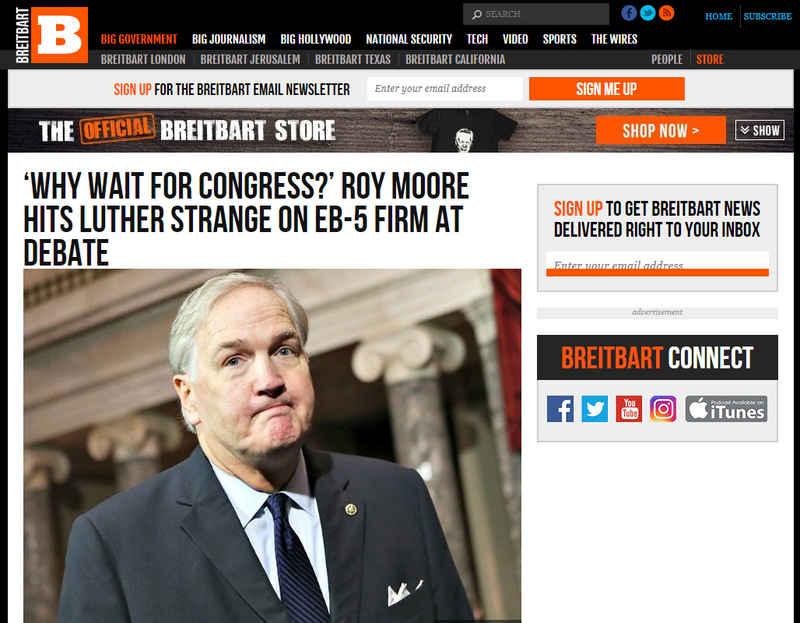 Referring to his opponent’s tight-lipped response to the scandal over his ownership interest in Sunbelt EB-5 Regional Center, LLC – a firm that promises visas for mostly Chinese investors and their families under the EB-5 program – that Congress had to “get to work” on concerns over the program, Moore said to the debate audiance:

Luther Strange agrees that their are serious concerns over the EB-5 visa program, which is ‘not being used as originally intended.’ He says it’s time for Congress to get to work on these issues, but Mr. Strange owns a part of the company and has received revenue therefrom from the sale of visas to wealthy Chinese investors.

“So why wait on Congress? Obviously Congress did not do their duty,” Moore posed to Luther, before asking the audiance, “How can we trust Luther Strange to address security concerns under a program administered by a company he owns?”

In response, Strange only made it clear he considered Moore’s comments a “personal attack.”

“Well for someone who is complaining about a lot of personal attacks, you seem to be prepared to deliver a bunch of them tonight,” he said, before changing the subject. “I’m going to stick with jobs and the economy.”

The EB-5 program, which allows foreign investors to secure American residency for themselves and their families if they invest $500,000 to $1 million in certain projects in the United States, has been troubled since its inauguration in 1990. As Moore pointed out at the debate, Senate Judiciary Chairman Chuck Grassley (R-IA) called the program “rife with fraud and national security weaknesses” earlier this year and said that it “has also strayed from Congress’s original intent to spur economic development in rural and depressed areas.” State Department numbers show that four-fifths of EB-5 visas go to Chinese.

Strange’s involvement with the program became clear on Monday when it was revealed that he owned a one-sixth interest in Sunbelt, a company that secures funding for American projects through EB-5 investors. Huntsville’s WHNT reported that Strange profited to the tune of $150,000 on a single EB-5 project.

Strange’s own campaign has declined to answer any of Breitbart News’s questions regarding the ownership of Sunbelt, including whether the appointed Senator has plans to sell his interest in the firm.