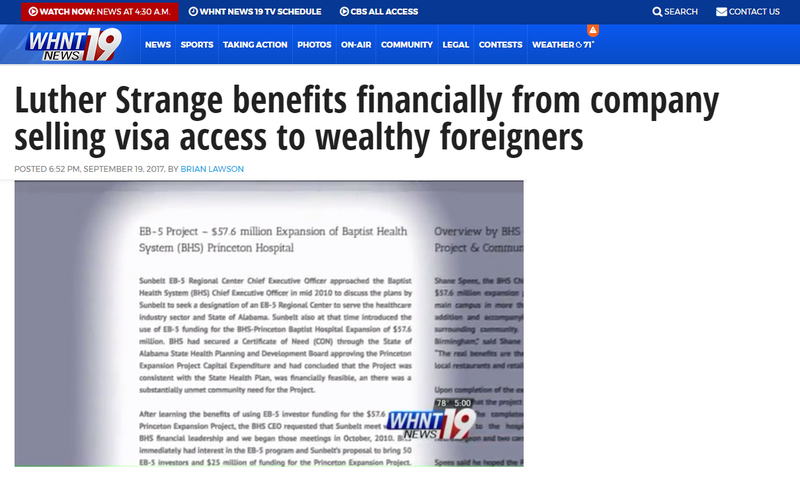 While immigration is among the hot-button issues in the Alabama U.S. Senate Runoff between Republicans Roy Moore and Luther Strange, WHNT News 19 has confirmed State Auditor Jim Zeigler's discovery that Strange currently benefits financially from a program that sells access to visas to wealthy foreigners.

Alabama State Auditor Jim Zeigler says," This is a program that allows wealthy foreigners to buy their way into the United States, bypassing the normal immigration process."

The EB-5 immigration program offers permanent residency status in exchange for big investments. Zeigler tells us, "You've heard of a green card? Well, this is called a golden card because it takes a half-million dollars, or $1 million dollars, depending on where they`re going."

The program allows wealthy foreigners, to earn a green card - permanent residency - for themselves and their children, if they invest their $500,000 or $1 million in an American business venture that creates at least 10 jobs.

The money is supposed to fund projects in low-income rural areas and create permanent jobs. But many Republicans have argued it's flawed. Zeigler points out, "U.S. Senator Chuck Grassley of Iowa (R) has been extremely critical of this program, in saying that it is wrought with fraud, and mismanagement, it has security problems."

Records indicate most of the wealthy investors in the program are from China. The EB-5 website even offers instructions in Chinese.

Sunbelt, the company Strange owns a stake in, doesn't have records available on their site, but the company's website says it recruited 50 investors and raised $25 million to help pay for the expansion of the Princeton Baptist Medical Center in Birmingham.

Strange's disclosure form says he made just over $150,000 on the hospital project.

Strange`s campaign said today he has a record of supporting tougher immigration laws, and said;

"Luther agrees with the Trump administration that there are serious concerns over the EB-5 visa program, which is not being used as originally intended. It's time for Congress to get to work on these issues. He looks forward to working hand-in-hand with the White House on legislation like the RAISE Act which would overhaul the program."

"Luther Strange is lying about Judge Moore's commitment to build the wall. Meanwhile, Strange is hiding his ownership in a company that sells EB-5 visas to foreign nationals. Strange says he is for a new tough immigration system that puts America first but profits off the broken system that takes much-needed jobs and business opportunities from Americans."