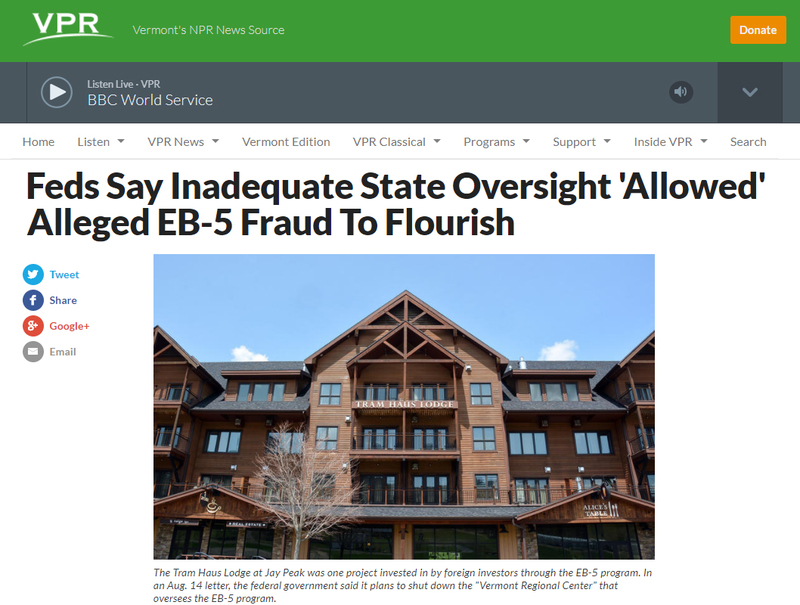 The Tram Haus Lodge at Jay Peak was one project invested in by foreign investors through the EB-5 program. In an Aug. 14 letter, the federal government said it plans to shut down the "Vermont Regional Center" that oversees the EB-5 program.

In June, the victims of one of the largest alleged frauds in state history filed a lawsuit against the state of Vermont. Last week, their case might have gotten a boost from an unlikely ally: the federal government.

An 85-page civil complaint filed in Lamoille County Superior Court on June 12 alleges that the state of Vermont was part and parcel of a $250 million fraud perpetrated by the developer behind seven EB-5 projects in the Northeast Kingdom.

The suit was filed by defrauded foreign investors, who attribute their losses to “gross negligence” and “willful misconduct” by the state regulators that were supposed to oversee the EB-5 projects in question.

The lawyers representing those investors now say that the federal government has corroborated Vermont’s regulatory ineptitude. And they say an Aug. 14 letter from United States Citizenship and Immigration Services documents a pattern of shortcomings for which the state of Vermont should be held financially liable.

“We have now seen the primary federal agency overseer … of the entire [EB-5] program weigh in on factual and legal questions, and it’s perfectly clear they have made an objective finding that the Vermont Regional Center failed to adequately monitor and oversee and manage their projects,” says Russell Barr, one of two Stowe attorneys representing the foreign investors.

"Evidence in the record indicates that the Regional Center's failure to provide adequate oversight and monitoring of its projects allowed the alleged malfeasance by [Ariel] Quiros ... to occur." — U.S. Citizenship and Immigration Services, in an Aug. 14 letter to the state.

The 27-page letter from USCIS provides notice to Vermont of its intent to terminate the state-run “Vermont Regional Center.” The center was created in 1997 to oversee EB-5 projects in Vermont; the federal EB-5 program offers green cards to foreigners who invest at least $500,000 in domestic corporate ventures.

Vermont’s EB-5 program came under a national spotlight last year when the Securities and Exchange Commission accused Ariel Quiros, the developer behind seven EB-5 projects in the Northeast Kingdom, of “misusing” $200 million in investor money and outright stealing another $50 million.

Foreign investors claim in their lawsuit that the Regional Center’s failure to execute its oversight authority allowed Quiros to perpetrate the alleged fraud. And they say the Regional Center, which was housed in the Agency of Commerce and Community Development, spent years “ignoring investor complaints, as well as attacking and attempting to discredit those who raise issue with the wrongdoing at the Jay Peak projects.”

Chandler Matson, the other Stowe attorney representing foreign investors in their case against the state, says his clients “came here to the United States with their investment, and there were rules in place that were there to protect them.”

“It’s pretty clear from the USCIS opinion that there were affirmative duties the Vermont Regional Center had to these immigrant investors. And quite simply, they didn’t live up to those duties,” Matson says.

"It's pretty clear from the USCIS opinion that there were affirmative duties the Vermont Regional Center had to these immigrant investors. And quite simply, they didn’t live up to those duties." — Attorney Chandler Matson

The Vermont Regional Center’s alleged failure to execute its oversight responsibilities is among the reasons the federal government has sought to terminate it.

USCIS goes so far as to say that “evidence in the record indicates that the Regional Center’s failure to provide adequate oversight and monitoring of its projects allowed the alleged malfeasance by Quiros and [his employee, Bill] Stenger to occur.”

“[W]ith more and better oversight from the Regional Center,” the USCIS wrote, “this all might have been avoided.”

Michael Pieciak, commissioner of the Vermont Department of Regulation, defends Vermont’s oversight of EB-5 projects, and says it was the state that helped build the fraud case against Quiros.

Pieciak’s department assumed financial oversight of EB-5 projects in Vermont after officials grew suspicious about the integrity of Quiros’ operations. Pieciak says that within weeks of assuming oversight duties, his department used its subpoena power to extract financial documents from Quiros' companies.

“But for the state of Vermont, but for the Department of Financial Regulation, it’s likely that the extent of the fraud would never have been uncovered, so we stand by our investigation,” Pieciak says.

The alleged fraud began in 2009, when Quiros first acquired Jay Peak Resort. Pieciak’s department assumed oversight duties in 2014. He says the Vermont Regional Center, which had sole duties for oversight prior to that transition, lacked the subpoena power needed to gain access to Quiros’ books.

"This is a failure maybe in the structure of the program, and not necessarily the Vermont Regional Center." — Commissioner of Financial Regulation Michael Pieciak

Pieciak says ferreting out the misdeeds was also made difficult by the fact that “the project developers actually built and constructed physical buildings, so it gave all appearances to everyone that the projects were proceeding along as planned.”

But Barr, one of the attorneys for the foreign investors, says “even a non-CPA accountant could have spent 15 minutes to an hour reviewing basically the first checkbook and would have been able to uncover the misappropriation of funds.”

“And that is what is so unfortunate for our state ... that as simple as a maybe a basic one-year junior accountant could have looked at some basic financial records and uncovered the misappropriations basically on day one,” Barr says.

The investors also note in their lawsuit that even after whistleblowers began delivering evidence of Quiros’ fraud to the Regional Center, state officials — including then-Gov. Peter Shumlin — continued to extol the virtues of Quiros’ projects to unwitting foreign investors.

The court-appointed receiver who took control of Quiros’ properties, after the SEC issued its charges, reached a $150 million settlement earlier this year with the brokerage firm Raymond James, for its alleged role in facilitating the transactions that Quiros relied on the perpetrate the fraud.

The settlement means all of the defrauded investors will get their $500,000 back. But Barr says “there are multiple facets of damages” that resulted from the alleged state negligence that allowed the fraud to occur in the first place. He says one of his clients had to pack up and go back to his home country as a result of the ordeal.

“If they get their money back, well that’s a great start, but once you start thinking about the uprooting of family because of the fraud, there are other elements of damage that far exceed that,” Barr says.

Asked about the investors' lawsuit Tuesday, Assistant Attorney General Bill Griffin said that “in general, we think they do not have merit.”

He says the state will be addressing the 16 claims leveled in the lawsuit “one by one, in a motion that will be asking the court to dismiss the complaint.”

The investors’ complaint targets a number of state agencies, including the Vermont Regional Center, the Agency of Commerce and Community Development, the Department of Financial Regulation, as well as specific state employees.