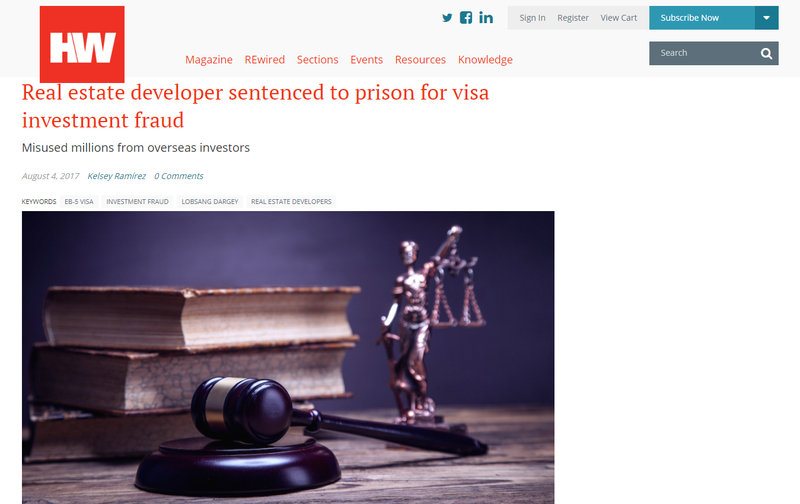 A former real estate developer received a prison sentence of four years with three years of probation for conspiring to commit investment visa fraud, according to an article by Marc Stiles for Puget Sound Business Journal.

Two years ago, former real estate developer Lobsang Dargey’s company Path America faced a civil complaint from the Securities and Exchange Commission. The complaint accusing him of committing fraud with millions of dollars from more than 250 overseas investors.

He later pleaded guilty to criminal charges in January and agreed to repay up to $24 million in restitution.

Dargey and the SEC reached an $18.4 settlement in March.

Judge Robert Lasnik sentenced Dargey Friday morning in the U.S. District Court for the Western District of Washington in Seattle.

Government attorneys alleged Dargey illegally took more than $235 million from various investors. He solicited money from investors outside the U.S. using the EB-5 immigrant investor programs, which allows investors to immigrate as a permanent resident if they invest at lease $500,000 in job-generating developments.

The money was to be used for two mixed-use developments – a high-rise in Seattle and a mid-rise in Everett – but Dargey put some of the money in other real estate projects and spent other funds on himself, including buying two fancy houses in Bellevue and withdrawing cash at casinos, prosecutors said.

HousingWire readers are familiar with the immigration program as other companies also recently ran into trouble with the EB-5 immigrant investor program. Back in May, the family of President Donald Trump’s son-in-law Jared Kushner advertised the visa to Chinese investors. At their event, the Kushner family seemingly advertised their connection to the White House, but later apologized, saying that wasn’t their intention.