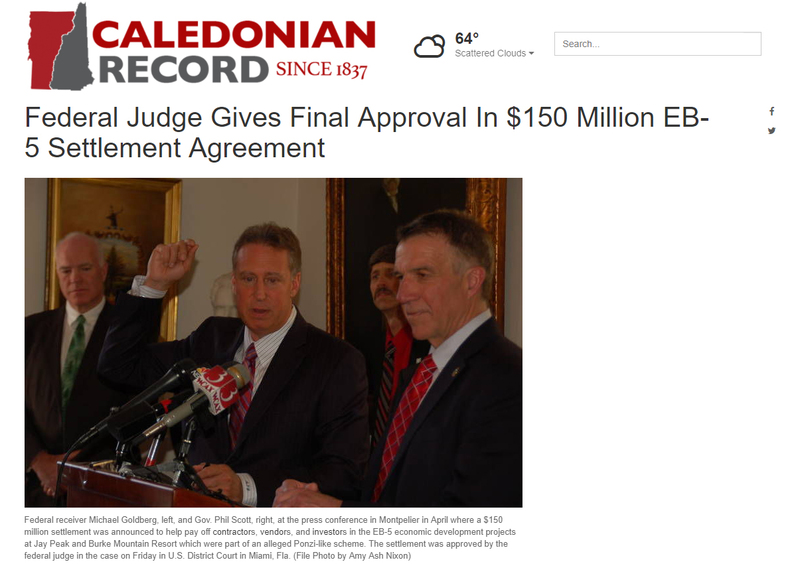 Federal receiver Michael Goldberg, left, and Gov. Phil Scott, right, at the press conference in Montpelier in April where a $150 million settlement was announced to help pay off  contractors, vendors and investors in the EB-5 economic development projects at Jay Peak and Burke Mountain Resort which were part of an alleged Ponzi-like scheme. The settlement was approved by the federal judge in the case on Friday in U.S. District Court in Miami, Fla.

Contractors and vendors, owed millions by the collapsed economic development projects at Burke Mountain and Jay Peak ski resorts, will start to see their bills paid when the federal receiver in charge of the properties receives proceeds in a now final $150 million settlement reached with financial services giant Raymond James.

Raymond James & Associates, Inc., entered into the settlement agreement with the receivership, headed by Michael Goldberg, in mid-April. Raymond James did not admit wrongdoing, but agreed to the sizable settlement which will make whole many of the parties wronged in the alleged ‘Ponzi-like’ scheme authorities accuse Miami businessman Ariel Quiros of having masterminded.

The settlement was granted preliminary approval days after it was inked in mid-April, on the exact anniversary of the fraud allegations. U.S. District Court Judge Darrin P. Gayles gave his final approval Friday, following a period of time during which all parties with claims against the receivership were given the opportunity to testify on the proposed settlement.

On Wednesday, Goldberg said the receivership expects to “get the first monies by July 20,” and “The next fund by mid-August.”

Raymond James was used by Quiros as one of the financial institutions through which he moved funds and held multiple accounts.

According to the final settlement motion, no formal objections were filed to the settlement.

“The receivership estate is limited and needs to be able to pay creditors, complete construction, as well as to focus on the operations and sale of the Estate assets,” the final settlement agreement motion states.

Last April, the SEC and the Vermont Attorney General accused Quiros, and to a lesser degree his associates, of having allegedly misappropriated more than $200 million in EB-5 immigrant investor funds, and Quiros alone of having allegedly pocketed another $50 million plus of investor pledges, which left missing funds for promised economic development projects in Vermont’s Northeast Kingdom which the money was raised for.

Goldberg told the court that the settlement will permit the receivership to “begin the process of immediately returning $67 million to some investors (comprising their principal investment of $500,000, not including their administrative fee payment of $50,000) and to protect and substantially increase the value of the assets for the remaining Investors.”

Another $68 million will be used to pay down vendors and contractors still out millions, as well as other debts, and to maintain the assets of the receivership which will eventually be sold.

Another $25 million of the total settlement is devoted to paying the legal costs of the aggrieved investors in the case, so that their attorneys’ fees and costs of recovering their investments will not come out of their pockets, stated Goldberg.

The initial settlement payment forthcoming to the receivership will make “it possible for the completion of construction of Stateside Phase VI to create the necessary jobs for all investors in Stateside Phase VI to be eligible to apply for permanent legal residency. As a result, all investors in Phases I through VI, and nearly all of the investors in Phase VIII, have obtained, or will be eligible to obtain, permanent legal residency because of the creation of jobs through the limited partnerships.”

Goldberg pointed to the lasting improvements at Jay Peak in spite of the scandal.

“Resort hotels and amenities were built and are operating for the Jay Peak Phases I through VI, and the Q Burke Phase VIII partnerships,” the receiver stated. “As a result, these limited partnerships have economic value.”

Investors in the final promised development, a biomedical research facility known as AnC Bio, were not as lucky in terms of their hoped-for immigration to the U.S., however, the settlement will see their investments returned in full.

“No project was completed and no qualifying jobs were created with respect to the Biomedical Phase VII project and, therefore, the Phase VII investors will achieve neither the right to permanent residency nor economic asset creation,” the receiver stated. “Indeed, it appears that much of Phase VII’s investment capital may have been used to pay other limit partnership’s expenses, to pay for illusory assets, or to enrich others,” in the alleged scheme.

As to the Burke project, where a new hotel and conference center was completed just as the alleged fraud scheme was coming undone, Goldberg stated in the settlement’s final motion, “ … the partnership was undersubscribed and it is not yet certain that it has or will generate sufficient jobs to allow for all of the investors in Phase VIII to obtain unconditional permanent residency.”

Goldberg noted that there are enough proven jobs created through Burke to satisfy the job requirements of EB-5 for all but 20 of the investors to be able to apply for permanent residency. He stated that he believes “the number of jobs should increase and be resolved in the forseeable future.”

The settlement will allow for both Jay Peak Resort and Burke Mountain Hotel to pay off all obligations and “to be clear of liens” noted Goldberg.

As part of the settlement, the receiver “is directed and authorized to dismiss his Claims against Raymond James and Joel Burstein, “Quiros’s former son-in-law, who was employed at Raymond James during the time of the alleged fraud.

Michael Pieciak, commissioner of the Vermont Department of Financial Regulation, said on Wednesday, “In terms of the settlement, Mike Goldberg said the governor’s letter in support of the settlement did play a role in it, and the fact the State of Vermont was in support of this settlement which accomplishes so many things including paying back all of those contractors and all of those vendors, plus paying back the AnC Bio investors whose funds were lost in a complete fraud, this is all good news all the way around.”

“On top of that the resorts are now in a good position to be sold,” added Pieciak, ” … all the way around it is just a win-win-win.”