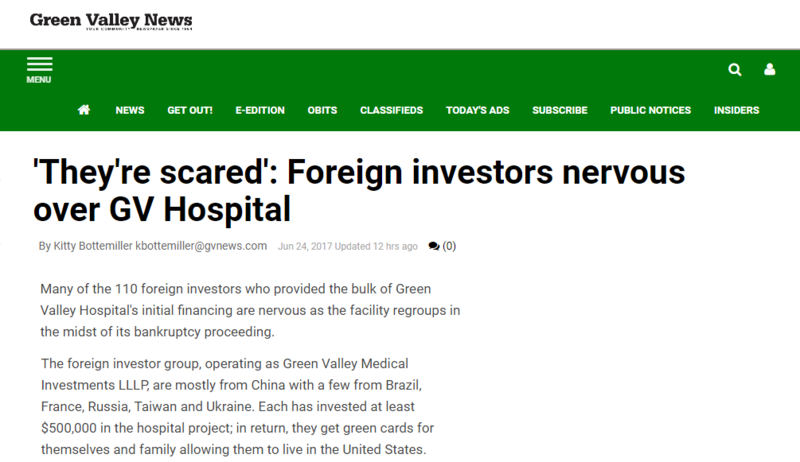 Many of the 110 foreign investors who provided the bulk of Green Valley Hospital's initial financing are nervous as the facility regroups in the midst of its bankruptcy proceeding.

The foreign investor group, operating as Green Valley Medical Investments LLLP, are mostly from China with a few from Brazil, France, Russia, Taiwan and Ukraine. Each has invested at least $500,000 in the hospital project; in return, they get green cards for themselves and family allowing them to live in the United States.

They're integrating to a new country, moving their families into unfamiliar surroundings, and are undergoing an emotional time as parties work to agree on a business reorganization plan everyone can live with, said Kyle Walker, principal managing partner with the Green Card Fund's corporate office in Phoenix.

“They're scared, and rightfully so,” Walker said. “I've tried to communicate with them and explain to them (about the Chapter 11 reorganization process), and that I wish there was other options,” but that the project was put into a difficult position by previous ownership.

In 2012, McDowell Enterprises LLC of Scottsdale announced it would develop the hospital for about $70 million. Roughly $52 million came from foreign investors through the Green Card Fund, a business that helps qualified foreigners obtain two-year, temporary visitor status by investing in businesses that create or preserve at least 10 full-time U.S. jobs. The investors can also apply for permanent residence, although not citizenship, through the EB-5 immigrant visa category.

As it turned out, the foreign investors committed about $55 million, nearly 80 percent of the financing, Walker said. Another $18 million was to come as equity and equipment leases shared by McDowell and Tucson Medical Center, the latter of which decided not to be involved before it launched. McDowell is no longer involved, having since pulled out quietly in September, and still has unsecured debt in the project.

In a letter to investors dated Sept. 29, 2016, McDowell said they had given up “all of our economic interest in the hospital.” The letter, on Green Valley Hospital letterhead and signed by Jim McDowell, ends, “This has been an expensive lesson for our family, but it will be worth it to us if the Chinese investors obtain permanent green cards and the residents of Green Valley end up with a hospital to serve their needs for years ahead.”

Over time, the GVMI partnership chipped in an additional $10 million as interest accrued and penalties were imposed.

For simplicity's sake, Walker refers to the $55 million original investment figure. The group was considered a senior secured lender; if there was a default, GVMI would be repaid first.

During the hospital's bankruptcy filing in April, a $20 million Debtor in Possession loan was approved and funded to serve as a bridge loan of sorts, and provides a first lien on everything related, placing the GVMI group second in line for repayment.

It could be likened to a home loan, where you can have first- and second-position lenders on the loan, the first being at the top to get their money in case of foreclosure, Walker said.

“I think what's important is that, had the hospital continued (it) would've collapsed under the debt,” Walker said. “The Chapter 11 has really allowed for restructuring so more of the investors can get something as opposed to all getting nothing.”

Still, it's an uncomfortable place to be, with the plan, filings and negotiations yet to be confirmed, he said.

Should the plan proceed as hoped, the GVMI investor loan would be converted into equity for long-term financing, and the group would head forward with loans it could easily manage.

Going into bankruptcy, the hospital had roughly $110 million in debt (secured and unsecured), Walker said. Based on the current proposed plan, it would have about $30 million to $34 million of debt coming out of bankruptcy.

Of the three investor categories involved — secured, unsecured and equity investors — McDowell and a group of Mexican investors who pitched in $15 million through Scottsdale venture capital partners Access|O to complete the project, qualify as equity investors.

As such, “effectively, those … are out of the money,” Walker said. “There's no money to cover all of the creditors. In addition, there was a specific Mexican investor who also provided an unsecured loan, and is both a lender and an investor, who will be in the unsecured creditor pool.”

In an interview following a public forum about the hospital's status Tuesday, Green Valley Hospital CEO John Matuska said, “I don't know their finances but as one of the unsecured creditors, (the McDowells) get what's left at the end of the process.”

There may be something for the unsecured creditors, although they don't have a collateral position, Walker said. There's no recorded lien on the property, whether it's real estate or equipment, no property such as the hospital itself or its ancillary buildings, underlying to secure it.

GVMI's lawyers are closely watching the bankruptcy proceedings, Walker said. He agrees with Matuska that the Chapter 11 process should wrap up by September, but cautions that “bankruptcy isn't a linear process and can always have some surprises.”

But now there's a filed plan, creditors are making comments and trying to work toward something everybody can live with, he said.

“All things considered, it's going as well as expected, and maybe even better than expected. Ultimately, I think all the creditors want to see the hospital continue to operate and serve the community.”

Everybody understands the need, and that this isn't a case where one doesn't exist, he said.

“There's lots of issues from previous ownership (and) I think the creditors realize the opportunity for a sustainable hospital and want to come together and see it succeed.”

Walker said he's impressed with their willingness to do so.

The situation may evolve, but right now, those are the facts, and the Green Card Fund is focused on all the investors getting their initial investment capital and their green card secured, Walker said.

In reference to comments Matuska made Tuesday to the Green Valley News about the EB-5 investments being unsecured, he later said, “I may have misspoken.”