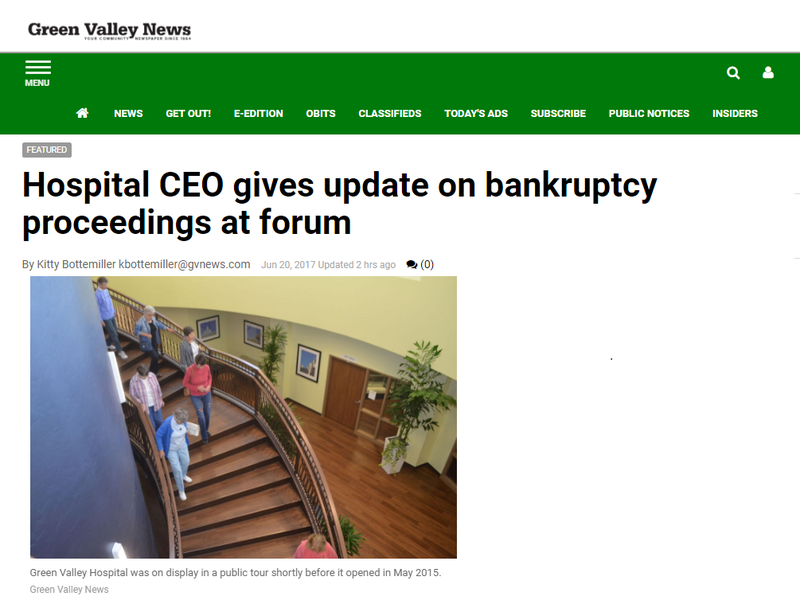 More than 200 people showed at the GVR West Center on Tuesday for an update from CEO John Matuska on Green Valley Hospital's financial health as it navigates the bankruptcy process. The hospital filed Chapter 11 bankruptcy in April.

A Debtor in Possession loan for $20 million has been approved and funded. It works like a bridge loan when an organization enters bankruptcy, providing a first lien on everything related, Matuska told the Green Valley News. If anything happens during the Chapter 11 bankruptcy process and assets must be liquidated, secured loans get paid first. If the organization survives financially and reorganizes, it would convert to permanent financing of secured debt, much like a mortgage.

No liens will be imposed after the DIP loan is paid off; the loan is secured by the properties. However, a new lender down the road may impose separate liens, Matuska said.

The hospital may be sold at some point, but he doesn't believe there are immediate plans to sell before the facility is in a much stronger financial position, he said in the interview.

“I'm not privy to the investors' plans but talk to them a lot,” Matuska said.

“Speaking generally, when you exit a Chapter 11, you continue to increase the profitability, which is exactly what venture capital funds do.”

Payment of critical vendors (physicians groups, equipment manufacturers, supply companies) has been approved by the bankruptcy court, allowing the hospital to continue serving patients, he said during the forum. At least one-third of Tuesday's attendees indicated they have used hospital services since it opened in May 2015.

A reorganization plan is being developed and permanent financing means are being evaluated; a plan is expected to be filed this week. The expectation is for the hospital to withdraw from Chapter 11 status between mid-August and September.

A three-day survey by a court-appointed ombudsman showed no health-quality issues at the hospital, and that the facility can continue normal operations, Matuska told the crowd. The next inspection visit is expected in July.

A Medicare survey performed in May revealed no major findings, Matuska said. Such evaluation is to be conducted periodically to retain Medicare accreditation.

The hospital currently employs 223 full-time equivalent positions, factoring seasonal staff-downs that are made through attrition, Matuska said during the interview after the forum.

According to a June 2017 Green Valley Hospital Investor Information update signed by the Green Card Fund, “bold” cost reductions in labor have been made by Matuska and Chief Financial Officer John Moore.

Labor costs have been reduced from 80 percent of revenue to 60 percent, according to the document obtained by the Green Valley News, with the goal of getting into the low 40 percent range.

Matuska said they will hit that range “based on revenue growth projections and staffing to census. If you increase you revenues, but the FTE’s remain the same, the ratio will decrease.”

This fall, discussion will begin on rebasing the hospital assessment set for AHCCCS patients, an assessment that was set before Green Valley Hospital opened. It has resulted in a $600,000 annual bill for the hospital for state-projected Medicaid patient discharges that the facility has not had. The first work group on the subject is set to meet in September, with Matuska among its members.

A request for an exemption was declined earlier this year, despite efforts despite efforts by local leaders who met with lawmakers, who agreed the assessment was unfair.

Chinese investors through the Green Card Fund now own 80 percent of the hospital's equity; Mexican investors own the other 20 percent.

All EB-5 program investors are unsecured, meaning their debt has been converted into stock in the hospital and are at the mercy of the market, Matuska said.

“For the most part, they're savvy about investments,” Matuska said. “The primary reason for investing, they're getting a green card. They do pretty good if they get a small (return) or all their money back.”

After a sale, everyone else gets a piece of what's left, generally not a lot, Matuska said in the interview.

A March 30 Green Valley Hospital Investor Information update indicated investors' visas — granted because they invested in certain U.S. projects — are not at risk. “We continue to communicate with investors’ immigration attorneys,” it reads. “As many of our EB-5 investors retained top law firms in the EB-5 industry, we are encouraged by the fact that the attorneys understand the plan. They are not concerned that the bankruptcy filing will put the immigration benefit at risk.”

The only secured investors tied to the hospital are the vendors for equipment, in the event of hospital failure. Even then, they'd be unlikely to reclaim their equipment due to the cost of doing so, Matuska noted.

Hospital developer McDowell Enterprises of Scottsdale, also an unsecured creditor, would get what's left at the end of the process, after that owned by Green Card Fund investors.

“It's no different than for a lot of hospitals,” Matuska said.

A teleneurologist with Banner-University Medical Center Tucson is providing patient consults via electronic communication, a urogynecologist, also from B-UMC Tucson, is on staff performing outpatient surgeries, and the hospital is recruiting a pain management specialist to open a clinic on campus by July.

Tucson Orthopedic Institute opened a clinic on the Green Valley campus in mid-May.

Earlier this month, Humana health coverage members gained access to GVH care, making it the last of the major Medicare Advantage providers to sign on.

There are no current plans to have a pulmonologist on campus as in the hospital's earlier stage; such specialists are spread thin and serve many hospitals, Matuska said. “We want them to be committed to seeing patients her or at least providing consultation with patients by phone.”

There's no current rheumatology care (joints, muscles, bones and immune system) on campus, but if demand warrants, it will be considered along with other specialties in the future, Matuska said.

An application submitted to the state health department for swing-bed designation, which would allow greater use of existing facilities and post-acute patient care closer to home, is expected to be approved

and the service offered within two months.

Hospital officials are in discussions to develop a chronic dialysis and wound-care centers on the hospital campus. The dialysis center would also bring a large nephrology (kidney-care) group.

Hospitals have consumed Matuska's career, and “I've never worked in one without financial difficulties,” he said. Given the hospital's dedicated staff of nurses, technicians and others who've stayed aboard since its beginning, and that it's in a stabilization process with lots of future initiatives in the works, “I think there's a very, very good chance of it surviving and being here a long time,” Matuska said. “The need is obvious.”

What gets hospitals into trouble is the need for a fixed number of staff without the volume (of patients) to support it; potential changes in Medicare and subsequent managed care companies could also have an impact.

Still, “right now, because of everything that it's gone through and all that's done on a daily basis, I believe Green Valley Hospital will be here a very long period of time,” Matuska said.

“Lastly, it has come to our attention that one of our EB-5 investors has communicated to a resident in Green Valley about the plan for Chapter 11 bankruptcy,” it said. “This rumor has now spread through Green Valley and has created challenges for the hospital and our plan. The hospital CEO had planned town halls to communicate with the community. These events will now have to be moved up due to the information leak.”

The document obtained by the Green Valley News said, “Future violations of confidentiality will require us to change our approach on communications. If the violations create damage, we will be required to take more serious actions.”

Additional public forums to update the community on hospital developments are anticipated in September and October, said Tom Purdon, a retired physician who serves on the Green Valley Council's Health and Human Services Committee and the hospital's Community Advisory Committee.